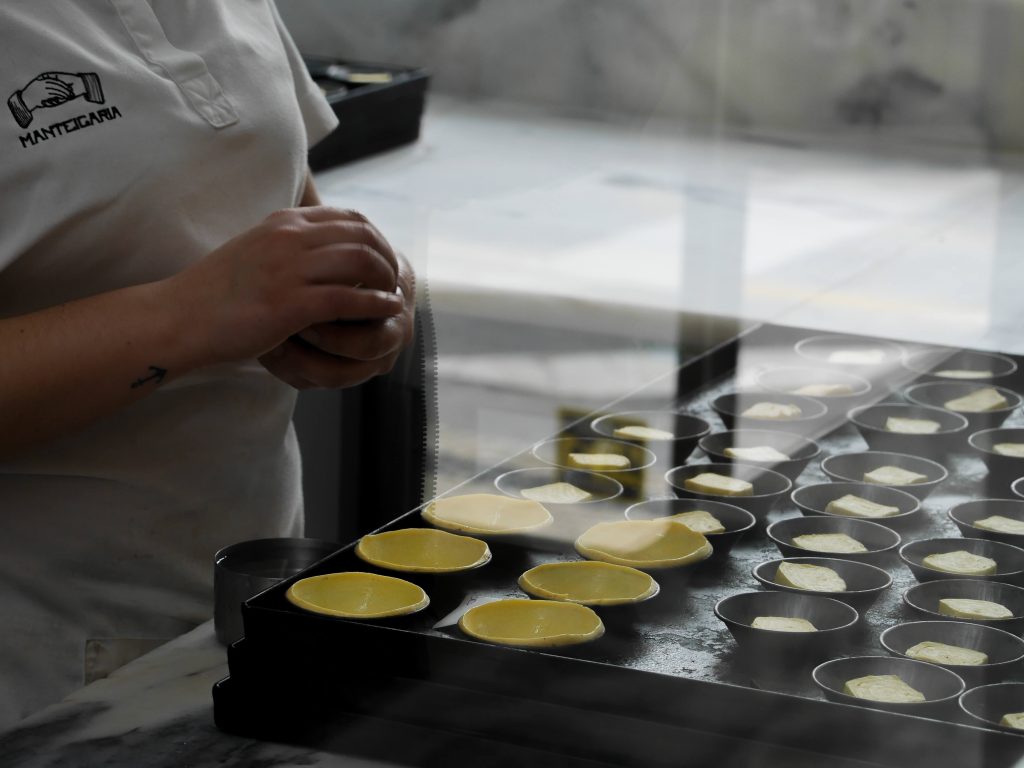 Pastel de nata! The famous custard tart that’s associated with a particular café in Lisbon. So why’s this list called the best Pastel de Nata in Porto then? Well, Porto is a foodie’s paradise in its own right, and anyone in Porto will tell you a glass of Port and a nata in the afternoon is just as good if not better than a nata and a coffee in the morning. Porto is a great destination to visit and while we’re busy writing our Porto guide, we’d thought we’d start with the best pastel de nata in Porto! With the rise of cheap flights to Porto there’s also a lot of visitors who might only be visiting Porto or who might be starting their Portugal experience in Porto. So who are we to tell them to wait for Lisbon before trying one of Portugal’s most famous snacks?

For the uninitiated a Pastel de Nata is a small custard tart with a puff pastry outside and a creamy custard interior made of egg, milk and sugar. Often served with a dusting of cinnamon. They are absolutely delicious and the perfect introduction to Portuguese pastries. What’s the difference between pastel and pasteis de nata? They’re the same thing, pastel is singular and pasteis is plural.

The original is called a Pastel de Belém and originates in the Belém district of Lisbon. The famous folktale is the original recipe was concocted at the now defunct monastery of Jerónimos.  Those monks would sell their custard tarts at a nearby sugar refinery and they soon made a name for themselves. Despite their entrepreneurial efforts, the monastery would close in 1834. They would then sell their secret recipe to a local businessman. That businessman would go on to open Fábrica Pastéis de Belém, a café that is still run by his descendants today. That original recipe is still a closely guarded secret. Despite this, it hasn’t stopped many bakeries and businesses trying to emulate the original recipe all to our benefit. The difference between Pastel de Nata and Pastel de Belém? Despite them looking and tasting very similar, only those from the original café can use the Belém name.

So if you’re in Porto, and you can’t get to the original café where do you start? It’s actually tricky, and just the task of trying to organise this list caused several arguments. The list is in no particular order and we really encourage you to visit all of cafes and choose your favourite yourself. Who doesn’t like the sound of a Pastel de nata tour of Porto?

If we had to pick a favourite from this list, Nata’s D’ouro might be it. They’re the geniuses that came up with the idea of fusing Port from Porto with the delicious nata. Yes, a Port flavoured Nata! They also have lots of other flavours; chocolate, lemon, orange are the ones we tried, if you’re not in the mood for an alcohol flavoured one. They’re also notable because some of their flavours have a different more canoe like shape to the pastry. Which results in a crispier custard delivery vehicle to your mouth. In a list where all of the nata is fantastic, these guys stand out for not sticking to the traditional ways. One nata costs €1 and six of them cost €5, the cheapest on this list for a box!

Majestic Café might be included on this list more for the environment and historic building than for the quality of its nata. The nata is still good, but it’s the historic café that stands out. It’s another place in Porto that has ties to Harry Potter as it’s rumoured J K Rowling would spend her time here! It is the most touristy and because of that our least favourite café on the list. Despite its grandeur it’s the busiest – you’ll often have to queue for a seat, and most expensive café. Seriously, a café and nata costs €6.50 while a single nata costs €3. In our opinion you should go to any other of the cafés on this list and buy six natas! That said, it still gets a worthy mention for its history and elegant 1920s ‘Belle Époque’ interior, just understand you’ll have to pay for it.

Next on the list is the world famous Natas Lisboa. If you haven’t heard of them, you probably will soon as they’re busy opening cafés all over the world. There’s a reason they’re so popular and that’s because their Nata is incredibly good! To try to put it into words, their custard is creamier than most and you get some lemon zest flavour! It’s also very busy,so there’s always fresh and importantly warm natas available. We had one each with a meia de leite and when we were walking out we saw them filling up the display so we couldnt resist taking two more with us. We visited the café on Avenida das Flores opposite São Bento Station but there is another near Mercado Bolhão on Rua de Santa Catarina. One nata costs €1.10 and a box of six cost €6.

The last stop of our nata tour of Porto was Manteigaria. There’s actually now two Manteigarias in Porto and it’s a good idea to know the differences before you visit them!

The first, and the one we visited on our recent trip is Manteigaria Bolhão. It’s one of the few cafés that is open on Sundays which might be important if you’re here on a weekend trip. It’s a modern coffee shop that’s split into two areas; the windowed factory and the large open plan café that’s also a showroom for Delta Coffee. If you’re walking past its easy to be mesmerised by the tireless confectioners that can be seen making natas at all stages. Inside, the coffee shop is large with lots of seating, although when we went it was still very busy and we had to wait for a seat! About their pastel de nata? Their’s is a thinner, flakier affair that seems to have more custard than a traditional one. We could taste more cinnamon and vanilla in the cream and they were delightful. One nata costs €1 and a box of six cost €6.

There is a second Manteigaria on Rua dos Clérigos. It’s the same company but this is more of a takeaway café. You’ll be able to order and eat the same great nata but there isn’t much space to sit and eat them. If you’re looking to grab and go, this is the café for you!

The last that makes this list is Vegana By Tentugal. It is a small vegan grocery store with a cosy coffee shop attached. It’s a relatively new arrival to Porto’s city centre but has a rapidly growing reputation as one of the best vegan and vegetarian cafés in Porto. Amazingly, they also offer a vegan pastel de nata made with a mixture of, soy cream, wheat flour, lemon and cinnamon. It’s rare and as of today still the only vegan pastel de nata we’ve come across in Porto. If you know of more then please let us know in the comments! A vegan nata Costs €1.30 for one. They also do a vegan Francesinha on Sundays which we haven’t tried yet but we hope to very soon!

Well there you go! Five fantastic places to get the best pastel de nata in Porto. And if you talk to the locals, maybe the best nata in Portugal. Let us know in the comments, if you have any other suggestions or if there’s somewhere you’d like added to this list! If you’re interested in making you’re own pastel de nata, read our recipe here!