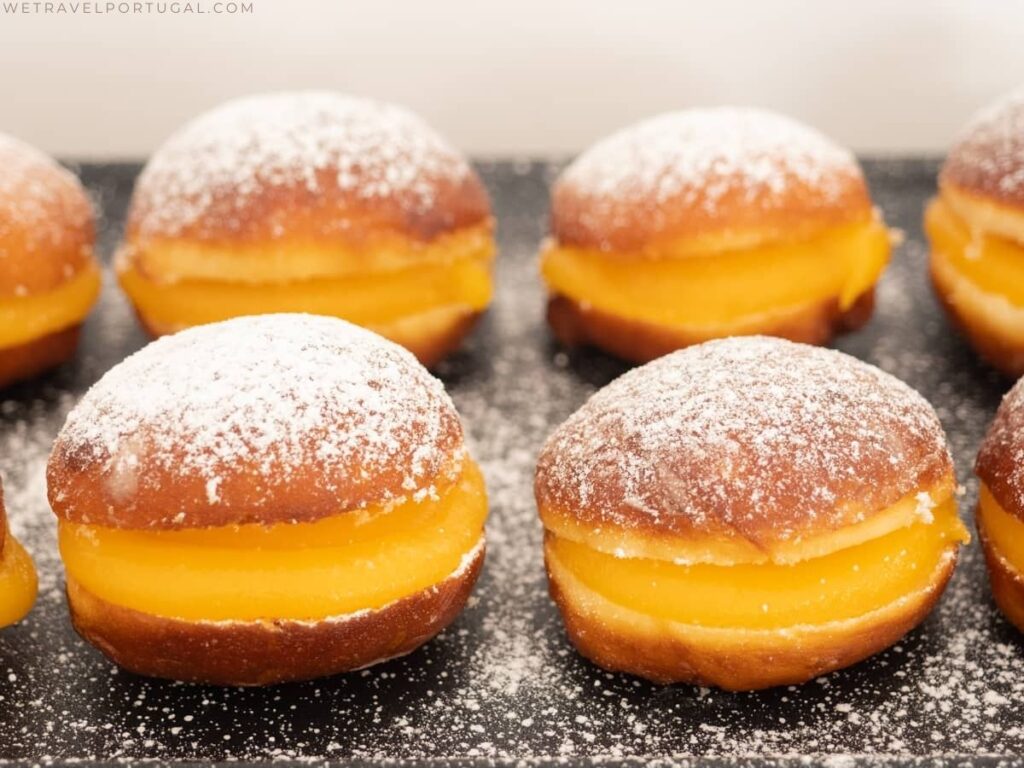 There’s nothing better than a freshly made Donut – or Doughnut. From the basic sugar glazed to more elaborate versions, this bread-like sweet holds a special place in everyone’s heart. No wonder it is a world classic. Donuts are so popular that some countries even have a ‘National Donut Day’ to honour the sweet treat.

Origins of the Bolas de Berlim

First records of the creation of this popular sweet dates back to the 14th century, with reference to a dough cake in the German cookbook ”Küchenmeisterei (Mastery of the Kitchen)”, published in 1485. Differently from today, these cakes had no holes in them, and were not necessarily even sweet. Similar recipes for a ‘dow nut‘ seemed to have appeared in England in 1800. It was only in the early 20th century that the dessert made it to the US. Through Dutch settlers, the ‘oily cakes’ were taken to Manhattan (New Amsterdam) where they gained their current and well known ring shape.

It is believed that donuts were introduced to Portugal by Jewish refugees during World War II when they began to work for local pastelarias and cafés. The recipe was later adapted to the local taste, gaining the traditional Portuguese egg cream filling. In the Azores, when they are known as malasadas. They are typically served without fillings, only sprinkled with a mix of sugar and cinnamon. In other parts of the country, especially in the Algarve, they are known as Bolinhas de Berlim meaning Berlim little balls, in a reference to the original Berliners. They are slightly bigger than Berliners, and cut halfway through like a sandwich, stuffed with egg custard, chocolate, and other cream-based fillings.

Bolinhas are typically appreciated at the beach, with dozens of vendors selling slightly bigger sized donuts than the German classic. They make the perfect beach snack due to their round shape, easy to be held even by children, and the sweet contrast it provides after a sea swim. The best thing is that you don’t even have to go to anywhere to buy them, the vendors will bring them to you, so keep you ears open to the distinctive way the treat is announced!

About Our Bolinha de Berlim Recipe

The secret for a good Bolinha is in the dough which should be fluffy and lightly sweet. The bread-like consistency is achieved by using fresh yeast. We used wet yeast, but you can substitute it with a smaller amount of dry yeast. When it comes to deep frying the donuts, the best oil temperature is around 180 °C, for those who don’t have access to a kitchen thermometer, you can test the temperature with a small ball of dough. When the oil reaches the right temperature, it should create gentle bubbles around the dough it as it fries. As for the filling, we used the classic Portuguese Doce de Ovos, that can be replaced by any fillings of your preference. It is important to make sure the filling has enough structure to remain inside the donuts. As anything deep fried, they are best enjoyed fresh, and although less fluffy, they will still be delicious the next day if kept in an airtight container.

For the Egg Custard

We hope you enjoyed this recipe of Portuguese Donuts! Next time you crave something sweet, why not try our Portuguese Rice Pudding recipe, or the traditional Pastel de Nata? If you tried our recipe, let us know in the comments!