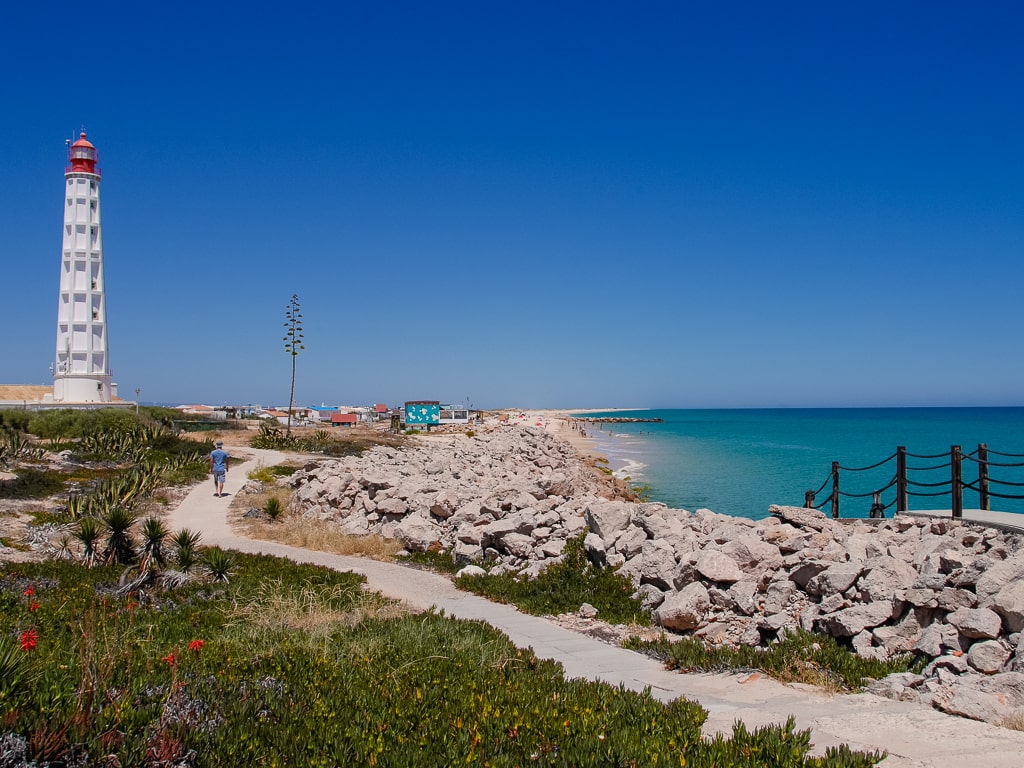 Ilha do Farol is a small community on a barrier island on the edge of the Ria Formosa, around 10km from Faro and 6km from Olhão. Praia do Farol, or Ilha do Farol as it’s known locally, is actually located on Ilha da Culatra. Although the names suggest they are separate islands, they are two different parts of the same 6km long island. With extensive white sandy beaches, crystal clear waters, and an incredible desert island feel it’s a fantastic day trip.

How to get to Ilha do Farol?

As it’s an island access is by boat only. The main and most frequent connections are from Olhão and from Faro. Small ferries operate the route every couple of hours on most days. Alternatively, you can hire a water taxi from either Olhão or Faro too. You can buy the tickets for the ferries at small offices at the dock in Olhão, or at Portas do Mar in Faro. Tickets cost around €1.85 each way. There are two piers on Ilha da Culatra, one in the east called Farol, and one halfway down the island in Culatra. The distance between the two docks is around 3.5km and you can walk between them if you wish. If you’re arriving by one of the ferries, you need to make sure to check for the last sailing of the day. It can be an expensive mistake to miss it. The water taxis are available but charge around €25-30 for the trip back to the mainland. Compared to the €1.85 ferry ticket it’s a little pricey.

What to see and do on Ilha do Farol?

The island is mostly known for its exceptional beaches, incredible water and deserted experience. As soon as you step out of the small community of Farol, you’ll experience it. It’s a supremely relaxing place to spend the day on and is an incredible break from much of the usual Algarve. However, that doesn’t mean you should skip through the small village and head straight to the beach at Praia da Ilha do Farol. In the village of Farol you’ll find delightful houses, wonderful gardens and a few small coffee shops, all under the setting of the stunning lighthouse!

Of course, though, the reason most people visit is the incredible beach. Right under the lighthouse you’ll find Praia da Ilha do Farol or just Praia do Farol. Right under the farol (that’s Portuguese for lighthouse) you’ll find the main section. There’s a large beach bar, and you’ll find sunbed and parasol rental. It’s lifeguarded and a safe place for swimming. Unfortunately, due to its remoteness, some of the facilities can be pricey. Sunbed and parasol rental is €10 for half a day, or €15 for a whole day. The selection of bars and restaurants is also small and they can be pricey too. That said, for standard things, like a café (a Portuguese coffee) it’s around €1 so quite reasonable. It’s the more tourist orientated activities and food that can be expensive. So, if you’re happy to bring your own towel, and lunch, it can be a fantastic and cheap day trip to see this part of the Algarve.

You’ll find everything you need for a great day on the beach. As a blue flag beach, it’s known for its exceptional facilities, cleanliness and beach access. There’s a toilet and shower, and during the day it’s lifeguarded so it’s safe to swim in the crystal-clear water too! Disabled access to the beach is also great.

The lighthouse Cabo de Santa Maria is the lighthouse this part of the island and community is named after. Farol being Portuguese word for lighthouse. A lighthouse on this part of the island first operated in 1851 but the structure today is a little newer than that. The original structure though, was reportedly the first lighthouse to be built in Portugal! It was modernised in 1949, when it was electrified, and a maritime radio beacon was installed.  Today it stands at 46m high and is an imposing structure on the surrounding scenery. Now fully modernised, the lighthouse emits four flashes of light in a 17 second cycle and has a range of over 25 miles!

Although now the lighthouse is usually pictured together with the main opening to the Ria Formosa, the lighthouse actually predates this channel. The channel was opened in the early 20th century to allow better access to the ports in Faro and Olhão. It was at this point the Islands of Culatra, and across the channel, Barreta were created. As previously they were connected, and part of much longer island called Ilha da Santa Maria. When the island was split, they created Ilha da Culatra and Ilha da Barreta (locally known as Ilha da Deserta). This is where the lighthouse gets its name from, Ilha da Santa Maria. As it was originally named after the island it was built on. Although officially it’s now on Ilha da Culatra. It’s also why, across the channel, you’ll find the most southerly point of mainland Portugal, Cabo de Santa Maria.

Walking around Ilha do Farol

If you’re less into lazing on a beautiful beach and more active, than Ilha do Farol is an exceptional place to go walking. The walk between Farol and Culatra is approximately 3.5km along the beach, or on the path through the dunes around 3km. If you take the dune road, you’ll pass the small community of Hangares. If you think it sounds like the English word for hangers, you’d be correct. It was originally named after the hangers that housed several seaplanes that operated here in the 1960s. Once outside the communities, you’ll usually be alone in the dunes and it’s an incredible place. If you’re planning on walking you need to remember to take plenty of water, sunscreen and a hat. There is usually a cool sea breeze, but there is nothing along the way to provide shelter from the sun and it’s all too easy to get burned.

Halfway along the island is Culatra, the other small community. Here the houses are less manicured, and the community is slightly more rustic. There’s no large restaurants or large beach bars on this part of the island. You will still find a few small cafés though. If you got the ferry from Olhão, the ferry would have stopped at Culatra first, before heading along the island to Farol. You can find out more about visiting Culatra in our guide here!

Praia da Culatra is the second blue flag beach on Ilha da Culatra. Like the community, its slightly more remote and usually much quieter than Praia da Ilha do Farol. It does have a small beach bar, that also rents sun beds and parasols. The prices are the same as Praia da Ilha do Farol, but due to its remoteness it does have a slightly more exclusive feel. Obviously, if you want your own beach you can walk in either direction and find plenty of space for yourself!

Something that’s come up a few times is the actions of tour operators and touts that run from both Portas do Mar (Faro) and the dock in Olhão. There are multiple shacks, windows and advertisements all claiming to offer ferry services, tours and boat rides. It’s not an uncommon complaint to have people accidentally booking the wrong boat, or booking a tour instead of the simple ferry.  The ferry to Ilha do Farol and Culatra costs around €1.85. Several complaints on tripadvisor also mention people being told the ferries aren’t running, or they’ve just missed it. So, they can wait 2 hours or take a water taxi or tour boat for €25. Simply check the published schedules, and check with the actual ferry office yourself first!

Somewhere to Stay on Ilha do Farol?

As a small community, Farol has very little in the way of accomodation. It’s a much better idea to stay in in either Olhão or Faro. Both towns have a much wider array of options to suit all budgets.

Should you visit Ilha do Farol?

Yes! Ilha do Farol, and its sibling Ilha da Culatra make for a fantastic day trip. Even the ferry ride on the way to the island is a bit of an adventure and a chance to experience some of the Ria Formosa’s unique environment and wildlife. Once you’re on the island you’ll find out it’s a hidden paradise and unlike anything else in the Algarve!