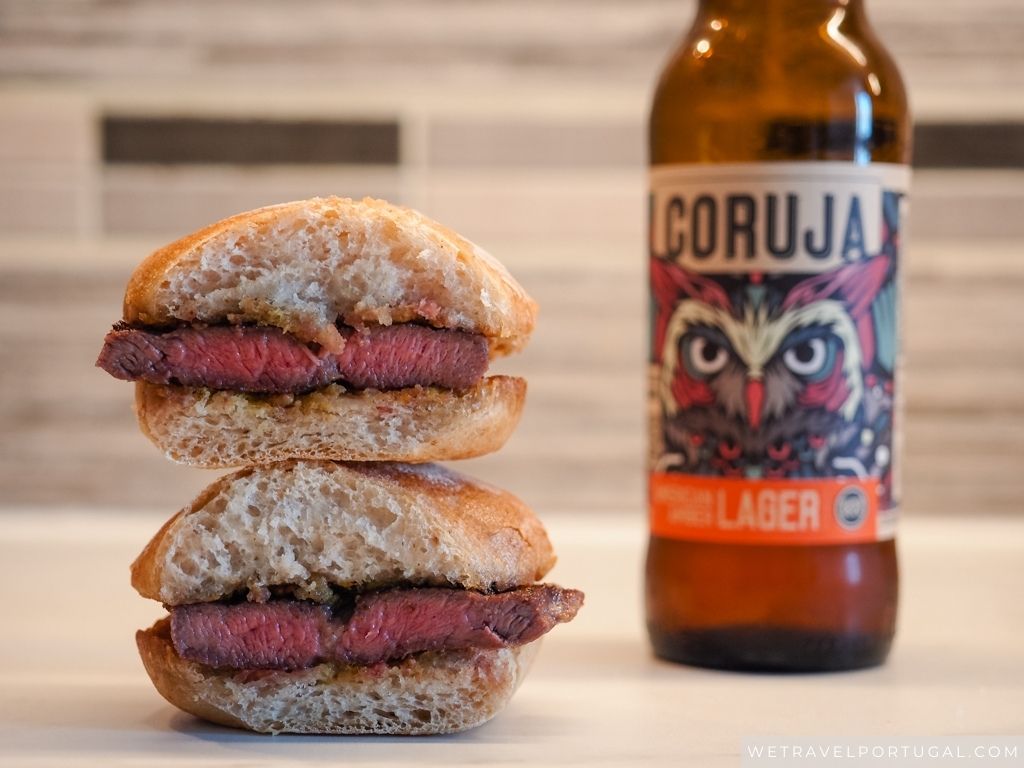 Portugal might not be the first country you think about when it comes to sandwiches. In fact, when it comes to the ‘national dishes’, or simply the most famous dishes in Portugal you’ll rarely see a sandwich mentioned. Well except one sandwich, that might not be a sandwich, but we’ll get to that later…. If you’re only in Portugal for a short time, then these really are the Portuguese sandwiches to hunt for! You’ll experience some classic Portuguese flavours, marinades, spices, fried and roasted meats, and hopefully some local cheese. Sandwiches are pretty meat heavy in Portugal, in fact there isn’t a vegetarian sandwich on this list, so apologies for that!

We’ll start this list with a favourite of ours, the bifana. The bifana is a pork sandwich that is enjoyed throughout the country, usually in a few different styles. You’ll be able to find a bifana on almost every snack bar, or cafés menus, it’s usually paired with an imperial of beer too. In the North of Portugal, it is usually made with shredded pork and served with lots of sauce. The sauce can be spicey, and usually made of a base of garlic, tomatoes, and an alcohol, quite often beer, but sometimes wine. It’s served inside a soft white roll, that sucks up the hot sauce, and served on a plate.

In the south of Portugal, the style is a little different. It’s a lighter sandwich which focuses on the pork cutlet. Instead of being shredded this time the pork is tenderised with a mallet and marinated. The marinade is the traditional southern Portuguese marinade made from olive oil, garlic, bay leaves, tomatoes, and white wine. It’s beautifully simple and makes a light and less messy sandwich that can be eaten on the go! Again, it’s served in a white roll, but it’s usually toasted. The great thing about a bifana is the basics are the same, but each place will have its own take on the sauce or marinade.

The recipe is believed to have originated in the town of Vendas Novas in Alentejo. Not surprisingly, several different cafes in Vendas Novas all claim to be the origin of the bifana. Vendas Novas is only around an hour outside of Lisbon, so if you’re travelling to or from Lisbon its probably worth a stop to try and figure the best one for yourself!

Prego no Pão is another deliciously simple Portuguese sandwich, this time made with beef.  It’s commonly served in the afternoon with a glass of beer, but it’s also part of a unique twist on Portuguese surf and turf. At many fish restaurants in Lisbon, its popular to serve it after a large fish meal, almost as a dessert! What’s in a Prego no Pão? It’s simply fried beef steak, served in a bread roll, and commonly accompanied with a cheap yellow mustard!

A key component, however, is the garlic. In fact, some people argue this is where the Prego takes its name from. Prego is the Portuguese word for nail, and some people believe the name comes from ‘nailing’ small pieces of garlic into the steak as it’s being tenderised. Others argue that the sandwich was named after Manuel Dias Prego, a resident of Praia das Maçãs in Sintra who at the end of the 19th century would sell wine and meat sandwiches from his small local business.

You’ll notice that this is another inexpensive sandwich, it won’t be fine cuts of steak (unless you’re making one at home). It’s also quite popular to have a fried egg on top of the steak – you’ll see it on menus as Prego no Pão com Ovo.

Finishing the trio of ‘simple’ meat sandwiches is the Sande de Leitão.  It’s most popular around the Bairrada region, where Leitão assado à Bairrada famously originates. What’s Leitão? Leitão is suckling pig, it’s said to be at its best between 4-6 weeks old. A point when it’s still suckling, and its diet is entirely milk. This results in exceptionally succulent and fatty meat, this is not a sandwich for calorie counters. Sande de Leitãos are simple sandwiches made from Leitão. The roasted pork will be in chunks, almost falling apart. It will be succulent and well roasted with some delicious flavours from the salt, pepper, garlic and bay leaves which form the typical paste of a Leitão assado. Served in a simple, fluffy white roll with a peppery sauce. If you can find a restaurant or bar, that serves Leitão, it’s well worth trying a Sande de Leitão.

Okay, so perhaps this is Portugal’s most famous sandwich. If you’ve been anywhere near Porto, you have most likely heard of it. Unlike the other sandwiches on this list, a Francesinha has to be served on a plate, and unless you’re feeling very brave needs to be eaten with a knife and fork. It’s another Portuguese sandwich with a hotly contested origin story, and multiple restaurants claiming to have the best version. Ask anyone where to find the best one, you’ll rarely hear the same opinion. Let’s start with the basics, what’s a Francesinha? Its most simple definition is a sandwich with multiple layers of meat, topped with cheese, surrounded by fries, and covered in a rich and spicy tomato sauce (Yes, there is a lot going on, and a lot to unpack here).

First the meat, it’s usually a form of sandwich ham on the bottom. Then a beef steak, then smoked sausage (linguiça), then fresh sausage. The bread should be sliced thick, it has a lot to contain, and can’t collapse – some say it needs to be stale or toasted. The cheese, the most typical Francesinhas use a light cheese and are almost wrapped like a parcel. Others will use stronger local varieties for their own twist. An egg? Fried eggs are common, they’ll be above the bread, but below the melted cheese, most of the time with the yolk exposed through the cheese. The sauce? It’s typically a spicy tomato sauce, with garlic and beer. It’s served surrounded by fries. With this much going on, there’s a lot that cafés and restaurants can do to make their sandwich their own. You’ll find versions with shrimp and a fish sauce, but you’ll also find vegetarian options if you really want to experience this.

The sandwich is notoriously referred to as a ‘heart attack on a plate’. For those that think the Portuguese diet is light or stereotypically Mediterranean, you’ll need to experience a Francesinha at least once. The hardest bit might be trying to find the best place to try your only Francesinha!

The final sandwich that makes this list is the humble tosta mista. It’s a simple toasty that will be served at pretty much every café or pastelaria. Usually also one of the cheapest items available. You’ll find a tosta mista is a popular for breakfast or any other time of day. It will often be included in breakfast deals served with a café, or included with a soup for lunch! It’s a simple ham and cheese toasty for the rest of the world. In Portugal, it’s usually served with a large dollop of butter on top which melts over the entire sandwich before it’s served. It makes a napkin necessary, or of course you can ask for it without the extra butter.

Which Portuguese Sandwiches Will You Try?

That’s five Portuguese sandwiches you need to try! It’s also a wonderful journey across many of the unique flavours and meats available in Portugal. All in simple sandwich form! Which ones will you be trying and which sandwiches do you think need to be added to this list? Let us know in the comments below!