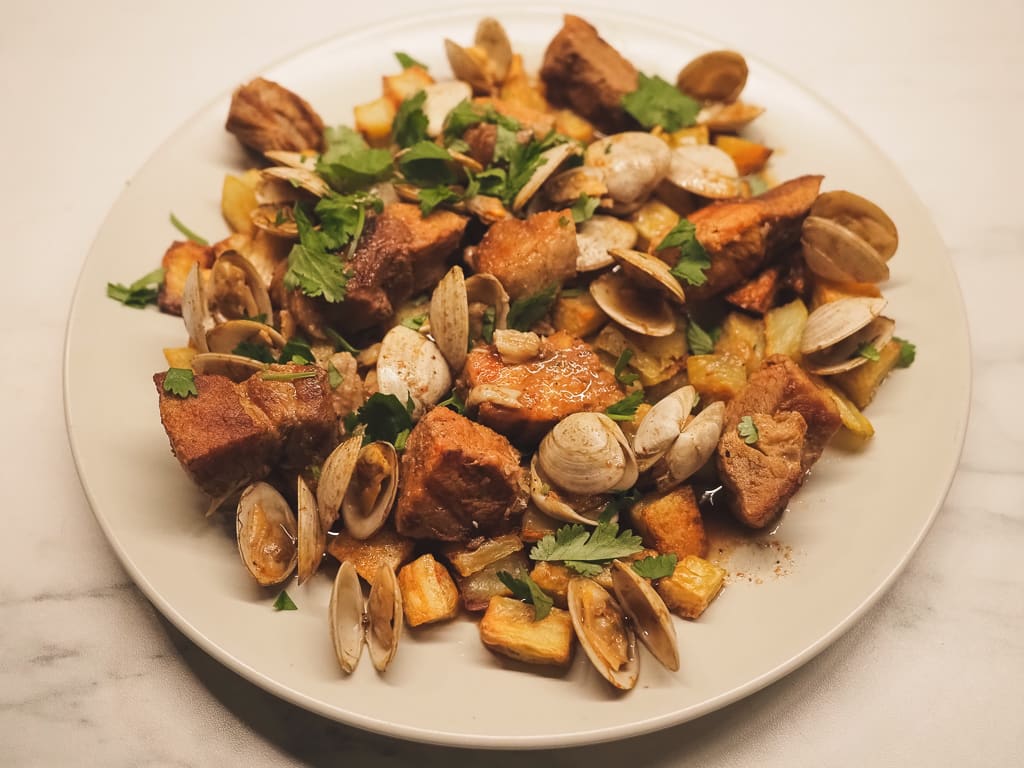 Few dishes sum up the flavours of the south of Portugal quite as well as Carne de Porco à Alentejana. You’ll find the dish listed on menus across the Algarve and Alentejo and obscured from its name is the wonderful addition of local clams. Intriguing and unusual for lots of cuisines, this is a dish that combines seafood and pork perfectly. Despite its name, it’s believed to have been invented somewhere in the Algarve. The Alentejana refers to some of the best pork available in Portugal, which would have originally been included in the dish. Although, just about any pork is fine, there’s no need to hunt for the famed Alentejo Pork if you’re not nearby. What else is in the dish? It’s the typical Southern Portuguese marinade of white wine, garlic, paprika, and bay leaf. If it’s familiar to you, that’s because it’s used in a surprising number of dishes, most famously the southern variant of the Bifana.

The two key ingredients that will make or break this dish are the clams and the pork. The variety of shellfish in Portugal is quite large but the two usually associated with a Carne de Porco à Alentejana are Amêijoa Branca (White Clams) or Berbigão (Cockles). We prefer the Amêijoa Branca, they tend to be sweeter. Of less importance is the choice of pork, although the traditional recipe calls for Alentejo pork, after all it is what the dish is named after. We don’t think it matters as much, and any good quality pork will do. The pork is marinated and simmered in the broth for at least an hour, so it gets tender, and very juicy either way!

We really like to serve ours with some fresh baked bread. It’s great for mopping up all the left over sauce on the plate! Let us know what you think of the recipe for a traditional Carne de Porco à Alentejana in the comments!