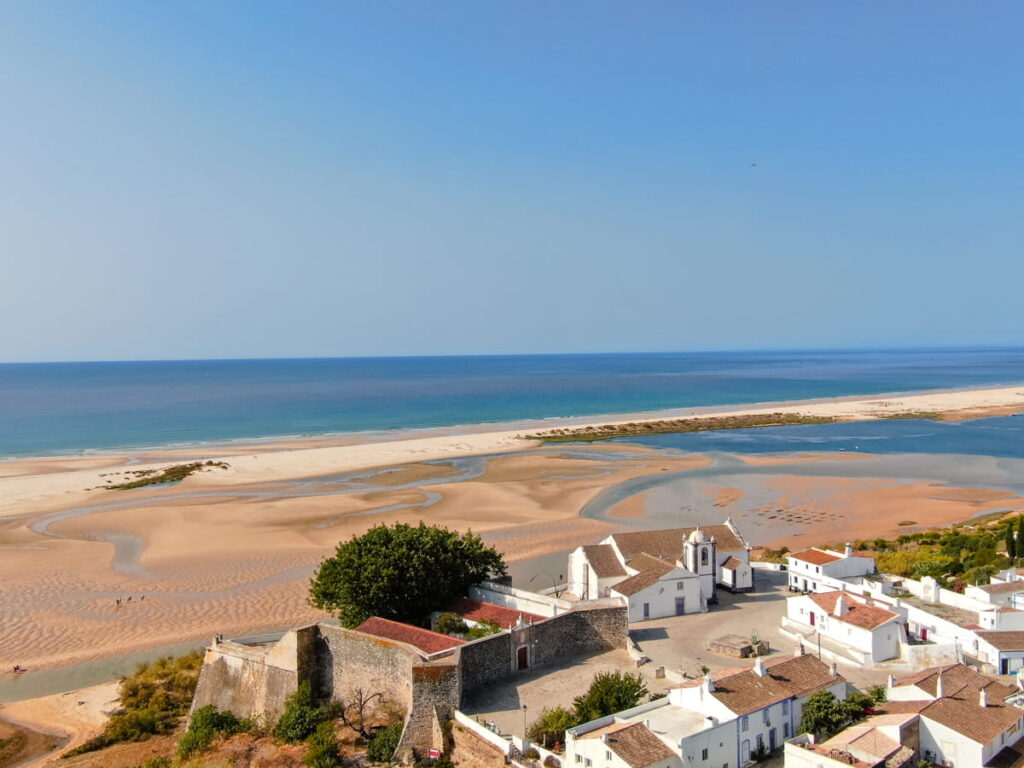 Cacela Velha is a tiny village located on a hill at the eastern end of the Ria Formosa. It’s a delightful day trip from anywhere in the Algarve and avoids much of the overcrowding that happens elsewhere on the coast. It’s famous for several things, the incredible views it offers, its expansive sandy beach, and its idyllic village protected by a small walled fortress. So read on to find out everything you need to know about visiting Cacela Velha.

When to visit Cacela Velha?

Considering there’s little else than the small village and expansive beach, the best time to visit Cacela Velha is during the warmer months. This will mean you can really enjoy the beach, the lagoon-side pools and a much calmer experience than most Algarve beaches!

How to get to Cacela Velha?

Cacela Velha is 50km to the east of Faro, or a 45-minute drive. With a large free car park, it’s simple to park and explore. To arrive by public transport it’s slightly more complicated. You’ll likely need to start your journey in Faro or connect there. From Faro, you can get a bus to the nearby village of Vila Nova de Cacela Velha. From there it’s a short ride on a local bus to Cacela Velha, or a 2km walk. The journey will take around two hours, and buses depart Faro often. This is the same route that will allow you to get to Cacela Velha from the nearby towns of Tavira and Olhao. Alternatively, you can also take the train as Vila Nova de Cacela Velha also has a train station. Train times can be found here. From the train station you’ll need to get the local bus, or a local taxi, or walk.

What to See and Do?

The village is small enough that you can walk around and see all of its charming features in less than an hour. Don’t think because of this that it’s not worth your time because it very much is! The small streets and layout is particularly charming. As you walk through it’s centre you’ll discover rows of houses in typical Algarvian style. Many of them in typical white, with blue, orange, or yellow highlights. You’ll find a mixture of both Arab and medieval influences.

Don’t forget to look up! Along the rows of houses, you’ll discover two unique architectural features typical of the Algarve. The styled platibandas – the top part of the façade that rises from the roof of the houses. These are often unique to each house and are painted in contrasting or highlighting colours. It’s also a great place to see intricately designed chimneys. Chimneys are fascinating in the Algarve and have a charming folklore to them. You’ll see many different styles, windows, adornments, and even levels with miniature roofs and spires. They were a symbol of prosperity, and supposedly you would order your chimney from the mason by the length of time it would take to design and build. As such, even some of the more unassuming cottages and houses in the Algarve have intricately designed chimneys! As you walk through Cacela Velha, keep an eye on the roof tops to see if you can find them!

As you follow the circular streets you’ll soon be faced by the Igreja Matriz de Cacela Velha. It is the only church in Cacela Velha and was originally constructed during the 16th century on the ruins of a previous medieval church. Similarly, to the fortress, it was destroyed then rebuilt following the great 1755 earthquake. Inside you’ll find a beautiful Renaissance arcade which features the busts of Saint Peter and Saint Paul. The church shares similar Renaissance heritage to the nearby Misericórdia church de Tavira and Matriz de Alcoutim, as the architects were the same! Unfortunately for the church, it’s possibly more famous for its views. A short walk around the back of the church will lead you to some of the best beach views in the Algarve.

In the square outside the church you’ll find the historic cistern and hand operated water pump. It’s believed the cistern also dates to the same reconstruction period as the church.

Next door to the church, you’ll find the Fortress of Cacela Velha. It was originally the site of an Arabic castle protecting the entrance to the Ria Formosa. The opening here was deep enough to allow ships and shipping to enter and sail towards Tavira and Faro. As such it was an important bottle neck to defend those towns against any would be raiders and pirates.

However, the fortress we see today is a little newer than the Moorish period. Construction began on Forte de Cacela in 1770 on the site of a previous fortress that was destroyed by the great earthquake of 1755. The fort and its bastions that overlook the cliff that we see today were completed in 1795. In 1897 the fort was given to the Fiscal Guarda, a branch of the military responsible for border protection, maritime policing and customs. In 1993, the Fiscal Guarda were absorbed into the modern day GNR who maintain fort as an outpost. Unfortunately, because it’s still in use by the GNR, you can’t actually enter the inside of the fortress. However, it still makes an impressive setting and viewpoint.

A short walk around the outskirts of the village, or directly east from the car park is the Jardim Representativo da Flora do Algarve. Or the Garden of Native Algarve Plant Species. It’s a wonderful place for both newcomers and veterans of the Algarve to discover the local native vegetation. It features a combination of trees, shrubberies and scrubs that you can find in the wild of the Algarve. Its entrance will lead you through a small orchard – full of local trees like medronho trees, fig trees, almond trees, carob trees, and olive trees. As you wonder through you’ll also be introduced to shrubberies and typical scrub vegetation found in the Algarve like rosemary, thyme, lavender and juniper. It’s all neatly labelled and laid out and is a great place to learn about natural habitats in the Algarve.

The garden also features one of the cutest hotels we’ve come across in the Algarve!

Yes, a hotel for insects! A great initiative, and a cute way of demonstrating the importance of pollinating insects in habitats of the Algarve. A short walk from the insect hotels you’ll also find a small pond. A water feature encouraging local birds to drink and cool off, and aquatic insects. Unfortunately, when we visited the birds were nowhere to be seen, but there were lots of dragon flies!

After fully exploring Cacela Velha it’s probably about time to discover its amazing beach. The expansive beach stretches to Praia de Cabanas to the west, and Praia da Manta Rota to the east. To make your way down to the beach, simply follow the signs to ‘Sítio da Fábrica’ on the west side of the village and take the steep but graded path to the channel edge. Depending on tide times, you can either wade across the channel or catch a local boat to the main beach. There’s also access on the east side of the town near a small staircase next to Forte de Cacela. Again it’s a small but quite steep path that will lead you down to a small beach, you’ll still need to cross the channel to reach the main beach though.

The beach is one of our absolute favourites in the Algarve and is unlike any of the other famous beaches here. It is devoid of any commercial facilities and is more popular with the locals than tourists. The occasional seller offering bola de berlim or drinks from an ice box is all there is for refreshments so make sure to bring you own. There are no life guards either so families tend to stay in the warm pools of the lagoon and its channels than the sea.

It’s important to get the timings right. Low tide makes for a short walk. High tide can make for a swim. The channels and pools that are wonderful for warm and safe swimming at low tide, quickly become quite fast flowing and deep at high tide. It is simple to follow the same path and swim, but it is not recommended for families with young children. Or anyone that’s taken lots of stuff to the beach – or electronics. During the peak season, multiple boats make the trip back and forth for around €1.50 each way. So it’s not that expensive.

Within the village itself there’s a handful of restaurants and cafés for dining and refreshment. No matter their reputation or reviews they all get exceedingly busy during the summer.

Casa da Igreja: Casa da Igreja is one of the absolute gems in the area. It’s famous for its selection of seafood, especially the local oysters and clams. Unfortunately, because of its reputation it can get incredibly busy so try to get here early during the summer and on weekends. As far as Algarve prices go, it’s very reasonable. With a plate of oysters costing around €12 and clams being €16. If you’re into seafood this is a must visit.

Casa Velha: We stopped by this restaurant when our first choice was exceptionally busy and we were pleasantly surprised. The staff were attentive and the food was great if a little expensive. You’ll find a wide selection of seafood and local Portuguese dishes here.

Those are the real options and unfortunately the other restaurants in the village don’t have quite the same reputation. You will find a much bigger selection of Restaurants in nearby Villa Nova da Cacela Velha (4km away) or in Manta Rota (5km away).

Somewhere to Stay in Cacela Velha?

Cacela Velha is a tiny village but is does have several charming options if you’d like to stay and experience a quiet evening. Vila Ria Formosa is a two bedroom villa located within the walls of the historic village. Nearby Vila Nova Cacela Velha is a slightly bigger town and has a wider array of options for you.

Should you visit Cacela Velha?

Yes! Please don’t mistake the small size or lack of things to do as a reason to skip over Cacela Velha. It’s a wonderfully underrated place that should be put on everyone’s Algarve itineraries. For other historic towns nearby with lots of history and culture, consider reading our guides to Loulé and Alcoutim! If there’s something you’d like to add to our guide, get in contact with us or leave a comment below.

Affiliate disclosure. Some of the links included in this post are affiliate links. What this means is we get a small percentage of the booking fee, if you do click the links and book something. This costs no extra for you and helps support the site.