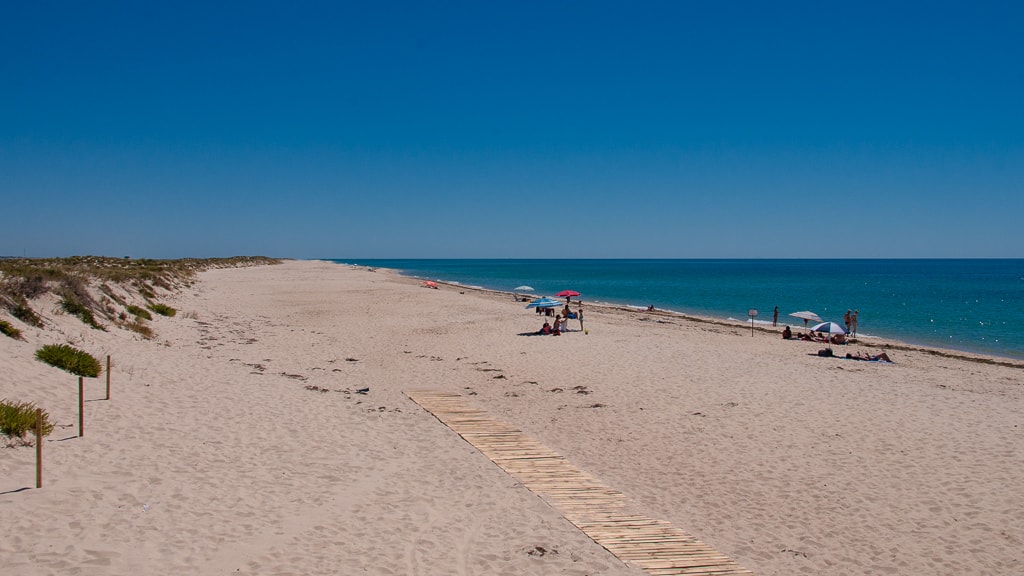 Ilha da Culatra is a small barrier island on the edge of the Ria Formosa around 10km from Faro and 6km from Olhão. Ilha da Culatra, Culatra and Praia da Culatra, as their names suggest are all parts of the same island and you’ll hear all variations of the name frequently. On the western end of the island you’ll also find Ilha do Farol. Which, although its name suggests otherwise, is not a separate island. Culatra is widely known as a remote paradise island. With near-tropical white sandy beaches stretching in both directions and low-lying beach communities. There’s little development and a distinct lack of mass tourism here which makes it a fantastic place to discover.

How to Get to Ilha da Culatra?

Ilha da Culatra is an island and to get there you need a boat. The most frequent connections to Ilha da Culatra are from Olhão or Faro in the Algarve. Small ferries operate the route frequently and sailings are on most days. You can buy the tickets for the ferries at small offices at the dock in Olhão, or at Portas do Mar in Faro. Tickets cost aound €1.85 each way from Olhão and €2.50 each way from Faro. There are two commercial piers on Ilha da Culatra. One in the west called Farol, and one halfway down the island in Culatra. The distance between the two docks is around 3.5km and you can walk between them. Alternatively, you can hire a private water taxi from either of the docks too. You’ll get a more personalised service and they’ll drop you off where you choose.

If you’re arriving by ferry, you do need to make sure to check for the last sailing of the day. It can be an expensive mistake to miss it. The water taxis are available but charge around €25-30 for the trip back to the mainland. Compared to the €1.85 ferry ticket it’s a little pricey.

What to See and Do on Ilha da Culatra?

The island is well known for its incredible beaches, crystal clear water and deserted island feeling. When you first step off the dock in Culatra you’ll be faced with the small village. It’s made up of small paths, bungalows, and a few small cafés. With no cars on the island it’s a very relaxing place where life does feel like its slowed down. You’ll still find a few tractors and three wheeled Piaggios bumbling around the small streets though. When walking into the village, the first thing you’ll see is Igreja da Culatra. It’s a understated church and nice introduction to this island community. Around the church are some informational boards showing photos of what life in the past was like when Culatra was primarily a fishing settlement.

The main reason for visitors is the incredible Praia da Culatra on the southern side of the island. It’s an extensive white sand beach that stretches the entirety of the island. The most remote and wild section is at the western tip of the island, but if you head west you’ll find Praia da Ilha do Farol. To get to the beach you’ll first need to cross the island and its dunes on a 1km long boardwalk. The boardwalk itself is impressive and serves two purposes. As well offering a quick and easy way across the dunes, it also protects them from human contact. So please keep to the boardwalk and don’t attempt your own crossing!  Once you’ve walked across you’ll be greeted with a beautiful and remote beach that is often referred to as paradise!

As a blue flag beach, it’s known for well-maintained facilities, cleanliness and great access. There are accessible toilets, and during the day it’s lifeguarded. So, it’s safe to swim in the crystal-clear water too! Disabled access to the beach is also great, with a long running board walk and access ramps. Mohle Leste is the only beach bar offering snacks and refreshments. They also organise parasol and sunbed rental on the beach. Sunbed and parasol rental is €10 for half a day, or €15 for a whole day.  However, with the beach stretching several kilometres in either direction. There’s more than enough space for privacy and to set down your own towel.

Despite the slower pace of life and beach paradise, Ilha da Culatra has some excellent walking routes if you’re feeling active. You can walk between Culatra and Farol. The hike is around 3.5km if you walk along the beach or around 3km if you walk through the dunes. If you opt for the dune route, around halfway you’ll pass the very small community of Hangares. It’s a former naval outpost and named after several seaplane hangars, that operated until the 1960s. Once you’re through the village, you’ll usually be alone in the dunes and it’s an incredible and almost otherworld like experience.

If you are planning on hiking on the island you need to remember to take plenty of water, a good sunscreen and at least a hat. Once you’re outside the villages there is no shelter from the sun. With the cool sea breeze it’s easy to forget how hot and how exposed you are in the sun!

One of the main reasons visitors head to this part of the island is the incredible views and of course the beach. Right under the lighthouse is Praia da Ilha do Farol or locally just Praia do Farol. Compared to the more remote Praia da Culatra it’s slightly more commercialised and busier. There’s a large beach bar, and several restaurants within the community of Farol. There’s a bigger section for sunbed and parasol rental, and a large area for anyone to place their own towels down nearby. Both sections are lifeguarded so its safe for swimming too. Whereas Praia da Culatra has a more peaceful and exclusive feel, Praia da Farol has a more popular and family focused appeal. Of course, neither are anywhere near as busy or as popular as other beaches in the Algarve.

Sunbed and parasol rental costs the same as nearby Praia da Culatra at €10 for half a day, or €15 for a whole day. The selection of bars and restaurants is also quite small and they can be a little on the expensive side too. That said, for simple things, like a café (a Portuguese coffee) it’s around €1 so quite reasonable. It’s the more tourist orientated activities and food that can be expensive. So, if you’re happy to bring your own towel, and lunch, it can be a fantastic and cheap day trip to see this part of the Algarve.

As mentioned in our guide to Farol and Ilha da Farol there can be some inconvenience when booking ferries to the island. It’s been reported that there are a few water taxis and tour operators that may try and take advantage of visitors when they’re trying to book ferries. At both docks there are multiple touts, operators, and shack like offices, all attempting to sell services and tours. It’s not an uncommon occurrence for people to accidentally book the wrong boat, or to book a tour instead of the ferry. The ferry to Ilha do Farol and Culatra costs around €1.85 from Olhão and €2.50 from Faro. Complaints on Google and Tripadvisor also report people being told the ferries aren’t running, or they’ve just missed it. So, they can wait 2 hours or take a water taxi €25. Simply check the schedules, and check with the actual ferry office first!

Should you visit Ilha da Culatra?

Yes! Ilha da Culatra and the nearby community of Farol are a great day trip from either Faro or Olhão. The remote island feel makes for a nice change of pace compared to the busier market towns or hectic coastal resorts of the Algarve. Even the ferry ride offers you a chance of experiencing the Ria Formosa without needing to take a private tour. You’ll get to experience the waterways and hopefully some of the marine and birdlife before you arrive on the island. Once you’re on Ilha Culatra, paradise beaches are waiting for you!