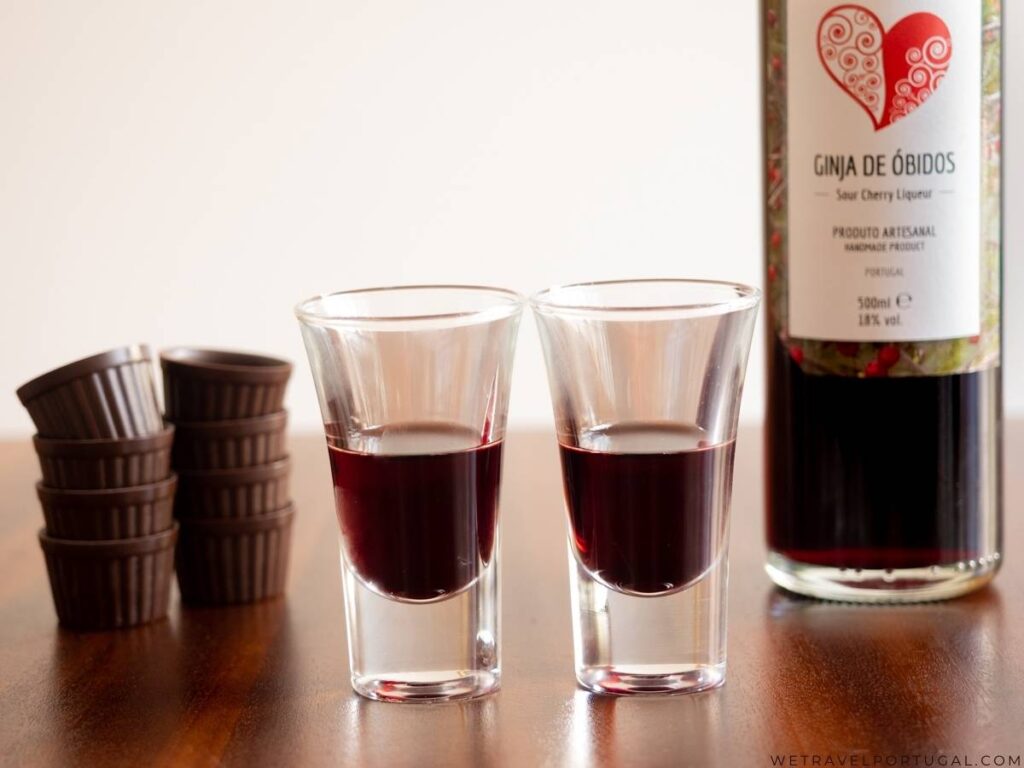 Ginjinha often shortened to Ginja, is a Portuguese liqueur made by infusing ginja berries (sour cherries) in alcohol – usually a local brandy (aguardente) or a wine spirit. A sweetener is then added, and sometimes even some spices like cinnamon or clove, it’s then left to infuse for several months or longer. What results is fruity, sweet, and alcoholic drink (usually between 18-24%), that is absolutely delicious. In recent times, visiting one of the traditional ginja bars in Lisbon has been added to every ‘must do’ list there is, and trying the local delicacy is seen as one of ‘must tastes’ to any visitors in Portugal.

Contents show
How to drink Ginja?
Served with or without a cherry?
Plastic, glass, and a chocolate cup?
Ginja in a chocolate cup?
Where to try Ginja in Lisbon – Historic Ginja Bars of Lisbon
A Ginjinha Espinheira – Est. 1840
Ginjinha Sem Rival – Est. 1890
Ginjinha Rubi – Est. 1931
Ginja de Óbidos – Ginjinha da Ribeira
Licor Eduardino: Who was Eduardino?
I can’t find a Ginja bar where can I find Ginja?
Other Famous Portuguese Drinks

It’s a locals favourite and now seen as one of the typical drinks of Portugal. With a particular focus on Lisbon, and the towns of Alcobaça, Óbidos, Marvão, and Covilhã. Ginjinha from Serra da Estrela, centered around the town of Covilhã, even has protected designation of origin.

How to drink Ginja?

With what ginja is out of the way, lets move on to how to drink it. Ginjinha is most commonly served in a shot glass with a single whole cherry in the bottom of the cup. Although it is usually served in shot form, it’s not traditionally drank as one. Take your time, sip, and enjoy the sweet but alcohol laden drink.

Served with or without a cherry?

The traditional, and historic Ginja bars you’ll find in Lisbon are simple affairs. Usually leaving you with one choice, with or without the cherry. It’s one to be considered carefully as not only will you be left with the sour cherry at the bottom of the cup, if you choose to eat it you’ll be left with a stone. Locals and traditionalists will usually choose the cherry, and if drinking outside, when finished spit the stone onto the floor. Or if you’re more polite, you can leave the stone in the cup.  Ordering ginjinha with the cherry is not essential though, and it’s just as common to order without the cherry. You’ll be asked: “Com ou sem elas?” or “Com ou sem fruta?”. You can reply “com elas” “with them”, or “sem elas’’ without them.

Plastic, glass, and a chocolate cup?

While traditionally it’s served in a small glass cup, it will be much more common to find and be served it in plastic. Why? Well, a couple of reasons are often given which pits the locals against the tourists. The first, tourists were much too keen on taking a souvenir from the bar and pocketing the small, ginja glasses when they left. The second, well the sheer business of the bars, meant washing and cleaning hundreds of small glasses an hour was made much simpler by using plastic disposable cups. The point is, don’t be offended if you’re served ginja in a plastic cup.

Ginja in a chocolate cup?

With the rising popularity of ginjinha came several attempts to capitalise on this, one of those was the chocolate cup. Which just so happens to be both tasty and solves the above problems with both plastic and glass cups. You drink your ginjinha and quickly crunch on a sweet chocolate cup. One brand, Ginjinha de Obidos, are credited with creating this twist. Although the chocolate cups can now be found at most bars, and packages from most major brands.

Where to try Ginja in Lisbon – Historic Ginja Bars of Lisbon

If you’ve looked for Ginjinha at any major supermarket or garrafeira you’ve likely come across the traditional brand Espinheria. In the heart of Rossio you can visit Espinheira’s original ginja bar, A Ginjinha. It is open daily from 9 a.m. to 10 p.m. and easily found in Rossio. This historic bar is recognised by Lisbon’s Lojas Com História (stores with history). It was first opened in 1840 by a Galician monk. Its claim to fame is as one of the first bars to sell ginjinha in Lisbon. In addition to small glasses of this sweet, fortified drink, you can buy their own ginjinha by the bottle. Inside it’s a simple affair, although do pay attention to the historic advertising and posters!

Ask a local which ginjinha bar is their favorite. If they don’t say A Ginjinha, they’re likely to swear by Ginjinha Sem Rival. It’s another of Lisbon’s loja com história, and only slightly younger than A Ginjinha, dating to 1890.

The final ginja bar in this historic area is Ginjinha Rubi, founded in 1931 it’s the youngest of the trio of bars in the historic district, but it’s easily the most glamourous. Okay, it’s difficult to call any of these bars glamourous but if you head inside Ginjinha Rubi, you’ll find the walls are covered in beautiful Azulejo tiles. Just like the traditional azulejo’s in religious buildings, each azulejo panel shows a scene or chapter from a story. Of course, this being a Ginjinha bar, the story in the panels here covers the harvesting, production, and serving of ginjinha. It’s a wonderful place to admire while sipping on a glass of ginjinha!

This isn’t one of the famous ginja bars, and it’s a much bigger more commercial environment. However, it is one of the major commercial brands and its lively location gets it a worthy mention. At Lisbon’s famous Time Out Market, facing the outside of the street you’ll find a Ginja de Óbidos outpost. Previously mentioned for pioneering the ginja served in a chocolate cup, here’s where you can give it a try, before moving inside to discover the rest of the Time Out Market.

Keen eyed visitors to any of the above bars might have spotted another bottle of something among the individual brands of Ginja. An old fashinoned bottle adorned with a clown and labeled Licor Eduardino. Who was Eduardino and how did he come to be on the bottle of liqueur? The story goes he was a famous clown that frequented Ginjinha Sem Rival, supposedly before and after his shows he would drink a special request. Ginjinha, blended with more spices – aniseed and cinnamon. The combination excited the locals and it was soon bottled and sold as Licor Eduardino. If you’re here to try ginja, then make sure you give its somewhat less famous cousin a try!

I can’t find a Ginja bar where can I find Ginja?

Most major supermarkets in Portugal now stock the various historic brands of Ginjinha, the most famous being – Espinheira, Albergaria Vila das Rainhas, Albergaria, and Ginja de Óbidos Mariquinhas. You’ll also find some of the brands exhibiting at the various feiras around Portugal. Online, you’ll find many even have their own store fronts so you can order your favourite ginja directly from the producer, or if you prefer you’ll even find it on Amazon!

Although ginja might be the most famous drink in Lisbon, Portugal has many other local drinks you need to try! From the aptly named firewater, to the deliciously creamy Liqor de Nata, want to find out more? Read our guide to Portuguese drinks here!

Contents show
How to drink Ginja?
Served with or without a cherry?
Plastic, glass, and a chocolate cup?
Ginja in a chocolate cup?
Where to try Ginja in Lisbon – Historic Ginja Bars of Lisbon
A Ginjinha Espinheira – Est. 1840
Ginjinha Sem Rival – Est. 1890
Ginjinha Rubi – Est. 1931
Ginja de Óbidos – Ginjinha da Ribeira
Licor Eduardino: Who was Eduardino?
I can’t find a Ginja bar where can I find Ginja?
Other Famous Portuguese Drinks