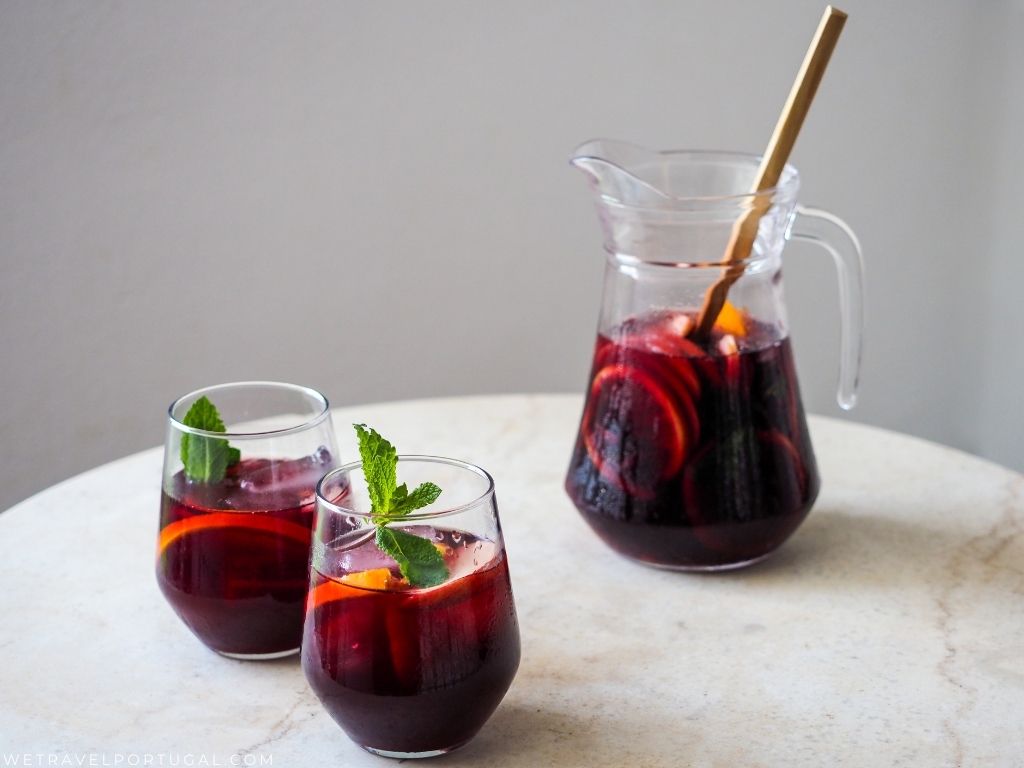 A surprise to some people when they arrive in Portugal is just how prolific sangria is. But it’s no surprise to the people that live here though, Portugal is just as much a country of wine as Spain is. Although across the world sangria is often considered more of a Spanish drink and tied to Spanish cuisine. Sangria can actually be produced in both Spain and Portugal, and its still unknown as to which region can actually claim the invention of the drink.

Where is Sangria From?

The mixing of wine and fruit can be traced back to the Roman period.  As the Roman’s conquered. Grapes, vineyards and their drinking habits flourished.  Back then it was common to mix water, with alcohol (wine), and fruits and spices to flavour it. The alcohol removed bacteria from the water and made it safe to drink. It was called ‘hippocras’ and it can be seen as the ancestor to both sangria and the popular winter version mulled wine. It’s believed the Phoenicians brought the grapes to Iberia, and the Romans tended or expanded the vineyards. Unfortunately, for what is now modern day Portugal and Spain, the Moors would conquer the peninsular around 700ad. Bringing with them Islamic rules, and an aversion to alcohol. Wine would not make a comeback until around the 14th and 15th century.

Does Portuguese Sangria Differ from Spanish?

Well, quite understandably, both countries, and their inhabitants are fiercely proud of their own wine, wine regions and sangria. In fact, sangria is most often home or house made to a secret recipe. There isn’t one strict recipe that everyone follows other than the very basics: usually red wine, and fruit, and often a mixer of some sort. It’s safe to say that sangria will differ from bar to bar, let alone Portugal to Spain.

What Wine is Used in Sangria in Portugal?

At its truest form Sangria should traditionally be made with a red wine, it’s where its name comes from after all. The Spanish sangría and Portuguese sangria both mean bloodletting, and come from the Latin word for blood sanguis. This doesn’t mean your sangria has to be blood red though. Portugal has a massive variety of high quality wines, head to any popular bar and you’ll usually see a branco (white) variety, rosé variety, and sometimes even a fizzy espumante variety. If you’re making yours at home don’t be afraid to try something new!

With us trying to shed some light on the Portuguese variety of sangria, we’ve decided to stick wholeheartedly to Portuguese ingredients and wine. Even the traditional liquor boost, is a combination of two Portuguese drinks; Licor Beirão, and Macieira, a brandy. If you don’t have these two to hand, then there are lots of other options including rum, gin, vermouth, cointreau and even a glass or two of port. Read on to find out how we make our very own sangria!

A Portuguese Twist on Sangria?

If you hadn’t realised, sangria has no strict recipe format. Nearly every bar, café or restaurant will serve it slightly differently. If anything, other than an ice cold red wine drink, it can be sometimes hard to predict what you’ll get exactly. One particular bar in Tavira we visited leaned heavily towards the cinnamon and spices. While a bar in Luz spikes theirs with rosé port, and uses exclusively red berries for a very fruity and sweet experience. If in doubt, ask your bartender what they put in theirs before ordering!

For an equally refreshing drink, take a look at our recipe for Port and Tonic, its Portugal’s very own version of a classic gin and tonic! What are some of your favourite things to include in your homemade sangria? Let us know in the comments!