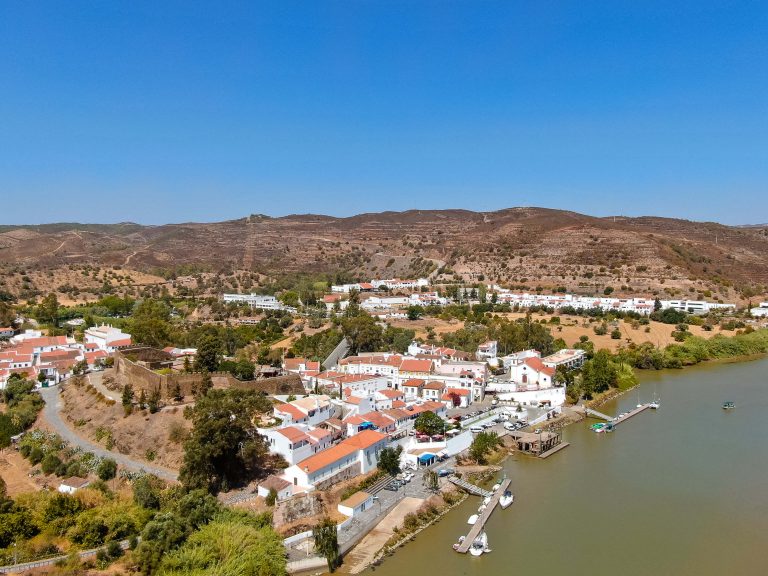 Nestled in a sleepy corner of the Algarve that borders both Spain and the Alentejo region of Portugal is perhaps the Algarve’s best kept secret. A small town with a surprising amount of history and a whole bunch of nature that makes for a wonderful escape from the typical Algarve. This is Alcoutim, a town with a population of 3,000 that’s located on the upper stretches of the Guadiana river. It’s a step back into the authentic Algarve and makes for a truly relaxing break that’s possible to enjoy in a day trip but best enjoyed over a couple of days! Read on to find out everything you might want to know in our guide to Alcoutim.

How to get to Alcoutim?

Getting to Alcoutim by public transport is a little complicated, but maybe that’s part of its hidden away charm!

You’ll first need to get to Vila Real de Santo Antonio’s Bus Terminal and from there you can get a bus to Alcoutim. To get to Vila Real you’ll likely need to connect in Faro if you’re visiting from further afield. It costs €5.75 to get to Vila Real from Faro. You can also get a train to Vila Real from any of the major towns too, although they’re less frequent. Once in Vila Real Santo Antonio there’s one bus on Mondays, Wednesdays and Fridays at 17:10 to Alcoutim. The only returns are available on Tuesdays and Thursdays. You can also get a bus to Alcoutim from Mertola and Beja although these connections are in the Alentejo region and are less travelled by tourists than those in the Algarve. You can check all of the bus times on EVA’s website here!

Arriving by your own vehicle is potentially the better choice. Car hire is available in Faro, and usually reasonably priced for a day or two. You can check the prices here! With long stretches of deserted tarmac, pleasing bends and seemingly endless views of the Guadiana it makes for an impressively scenic drive. In our opinion it’s one of the best roads for motorbike riders in the Algarve too.

How to get around Alcoutim?

Everything is within easy walking distance, so once you arrive, you’ll most likely park your vehicle and forget about it. There’s a couple of locations further out that you will need to drive to, but they’re not necessary to complete your trip to Alcoutim.

What to see and do in Alcoutim?

Alcoutim’s steep and narrow streets retain much of the calm atmosphere that is typical of an Algarve hill town. With only a few minutes’ walk you’ll discover historic houses, local handicrafts and historical monuments. After walking around, we recommend taking a short stop at the riverside in the shade of Café Alcoutim. It might have been the heat, but a cold beer served in an ice-cold glass sat by the riverside was an exceptional moment on our recent trip to Alcoutim. It’s a calming place where you can watch the small ferries and pleasure boats coming and going.

The Moorish castle of Alcoutim was originally built in the 14th century to defend the border and sits on top of a large hill dominating the town below it. We think it’s best to head here first to take in the impressive views in all directions and to really get a feel of the town and its natural surroundings. There’s impressive view points from all angles and a walk along the wall will give you a great perspective. The Castle of Alcoutim costs €2.50 to enter and you get admission to the archelogical museum located inside and several other nearby monuments included in the ticket price. The castle and it’s archaeological museum are well worth the small ticket entry and you’ll find out about a lot more than just the origins of the castle.

If you look out towards the south-west from the castle walls, you’ll spot the cupola or dome of Ermida de Nossa Senhora da Conceição rising above the rooftops. Confusingly it’s also known as Igreja de Santa Maria (Church of Santa Maria) and it’s notable for several things. Inside you’ll find a beautiful Baroque altar piece dated to the mid-17th century. Outside you’ll see a circular baroque staircase that leads to the chapel and these were also a later addition. The church was originally built to incorporate the ruins of a 16th century Manueline church and was completed in the 18th century. With its place on the hillside it offers stunning views across the terracotta rooftops and towards the river.

Heading back towards the town and close to the riverfront is the main church of Alcoutim, the Igreja Matriz de Alcoutim. It was originally built during the 14th Century but was updated and enlarged in the 16th century. It is one of the earliest examples of Renaissance architecture in the Algarve, and locally regarded as the best example. If you look above the door of the church you’ll find coat of arms of the Marquises of Vila Real and Counts of Alcoutim.

Across the river, you’ll find Sanlúcar de Guadiana and in many ways,  it is Alcoutim’s twin. Its a small town with steep streets leading to a castle at the top of a hill. Among the streets of Sanlúcar you’ll find lots of Spanish charm and high up on the hill is the whitewashed Castle of Sanlúcar also known as Castillo de San Marcos. It’s on a much higher hill than Alcoutim’s castle so if you don’t fancy the steep walk up you can catch a local bus service. A ferry service for people is available that can take you across the Guadiana river to visit the Spanish town for approximately €1 each way. On quiet days you’ll probably have to wait as we found the ferry wouldn’t make the return trip until the captain had a few passengers!

After a day of walking and sightseeing, perhaps the best place to spend the afternoon is relaxing on a beach. Yes, that’s right, 60km from the coast there’s a beach in Alcoutim. The beach is called Praia Fluvial do Pego Fundo and if you didn’t guess it’s a rather nice river beach. Here it is safe to swim in a small damned tributary of the Guadiana river. The water is clear and refreshing, and the sand is clean. The beach is very different from the beaches typical of the Algarve, but that is what makes it so unique. Praia Fluvial is popular with locals, but still relatively calm. There is a beach bar called Tá-se Bem Beach Club for refreshments. The service is good, the staff are friendly, but don’t expect much more than typical bar food. You’ll also find the typical beach facilities with toilets, showers, and changing rooms.

Visiting the castle, the museum, the two churches, some shops and the river beach is enough activity to fill a relaxed day’s sightseeing. But if you’d like to squeeze some more activity into your trip then read on for some additional excursions available from Alcoutim!

As mentioned earlier, the ticket entry of the Castle gets you entry into some other local museums and archaeological sites. Two of those can be found approximately 10km south of Alcoutim following scenic road alongside the river the M507. The first you’ll come across is Villa Romana do Montinho das Laranjeiras. It’s a small archaeological site exploring the ruins of a small Roman Villa just outside of Laranjeiras. The next and offering more of a focal point is the Museu do Rio or the River Museum. It’s a small museum dedicated to the river and the culture that developed around it. It overs several themes including traditional fishing, river transport, and even smuggling along the Guadiana.

Spend some time on the Guadiana: Scenic River Cruise

Sailing along the river is a chance to observe some unspoilt Mediterranean scenery and all the wildlife that that comes with it. It’s a prime spot for bird watching and cruising slowly up the river can be both a relaxing and exciting activity. Several tour companies offer both half day and sunset tours. Alternatively, if you want to go at your own pace you can also rent your own canoe.

Amazingly, you’ll find the only cross border zipline in the world right in Sanlúcar de Guadiana. Once you’re on the Spanish side the river you’ll be taken to the departure platform by a 4×4. You’ll then make the 800m crossing over the Guadiana river at speeds of up to 80kmph. If this sounds like your kind of thing it costs €20 and includes the ferry crossing depending on which town you book your crossing at.

With these additional activities, there’s easily enough activity to fill a couple of days of sightseeing and relaxing.

Being a small town, there’s only a few restaurants available. But there’s still a few gems that you absolutely should discover!

Restaurante O Rio. Perched up on the hill slightly above the town is O Rio.  The restaurant serves great food in large portions, while their outside terrace offers superb views. Prices are reasonable and so is the house wine!

Taberna Do Ramos: Located about 5km outside Alcoutim but it’s well worth the drive. Taberna Do Ramos is a traditional restaurant serving great local food with a mix of both Alentejo and Algarve styles.

Shiva Indian Restaurant. This is probably the only non-local cuisine you’ll find in the town so luckily it’s pretty good! The service is friendly and welcoming, when we visited, we had a great lamb saag with all the extras. Well worth a visit if you want something outside the local cuisine.

O Soeiro If you want a waterfront terrace while your sardines are cooked on a grill outside then look no further than O Soeiro. It’s typical Portuguese grill, with lots of meat and fish options, all served with a generous portion of fries and a house salad. Prices are very reasonable too!

We really hope you’ve enjoyed reading our guide to Alcoutim and that it inspires you to visit. For other similar towns with lots of history and culture, consider reading our guides to Loulé and Silves! If there’s something you think we’ve missed, get in contact with us or leave a comment below.