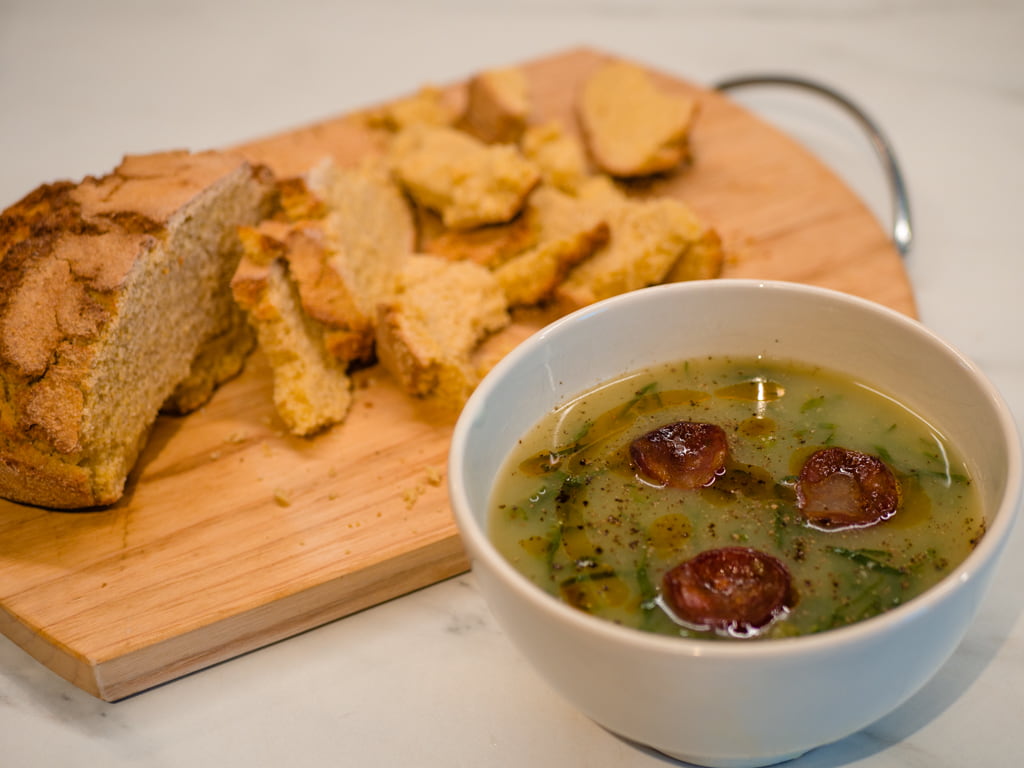 Few things are as warming and delicious as some of the soups available here in Portugal. They’re also amazingly cheap at most cafés. Often a serving of sopa do dia and a slice of bread can be as little as €1! That’s the soup of the day, and if you’re lucky it will be a serving of Caldo Verde! Caldo Verde has to be one of our favourite soups, and the Verde in its name refers to the deep green colour of Portuguese Kale. It’s sometimes also referred to as Portuguese Cabbage, and in Portuguese you’ll see it referred to as Couve Tronchuda. It’s important to get this kale sliced right, as it wouldn’t be a Caldo Verde if they weren’t simply cut into long thin strands.

Caldo Verde is believed to have originated in the north of the country, but it’s served everywhere and especially popular as a starter during celebrations. It’s simple to make and made from some easy to find local and healthy ingredients, so there shouldn’t be anything stopping you! In 2011, Caldo Verde would be awarded the title of one of Portugal’s Seven Wonders of Gastronomy. The Seven wonders of Gastronomy were a hand-picked list of Portuguese dishes chosen to represent the heritage, and history of traditional food production in Portugal.

Traditionally, the soup is served with broa de milho. That’s a type of Portuguese corn bread, it’s a dense bread, with a crunchy and crumbly top and rather excellent to mop the soup up with. If you can’t find corn bread, or you’re not making it yourself, any good fresh bread will do. With that out of the way, lets get into our recipe!

Let us know what your favourite soups from Portugal are in the comments!