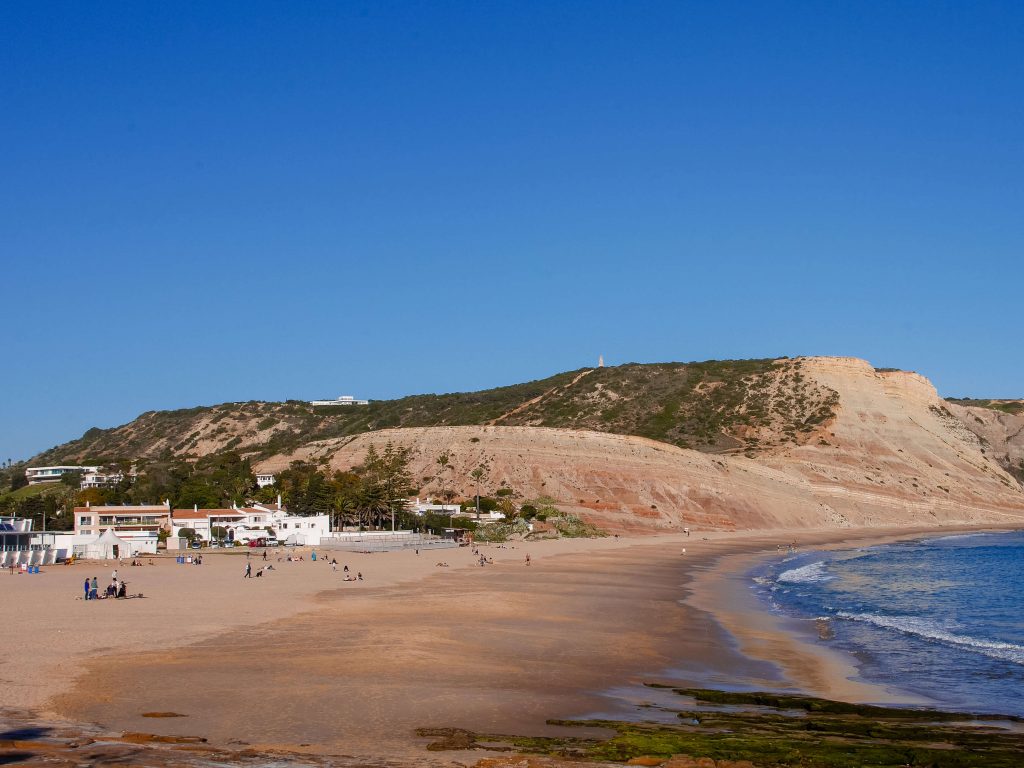 Praia da Luz is a small resort town located on the incredible Algarve coastline 10km west of Lagos. Praia da Luz or just Luz, was originally a small fishing village on the edge of sandy bay surrounded by cliffs. This sandy bay sheltered by cliffs means it’s a perfect family beach destination. Although the town is now more of a holiday resort it still retains some of the original features from its historical past.

When to Visit Luz Portugal?

Although it’s widely known as a beach resort. The surrounding cliffs make for impressive walking and the rest of the stunning western Algarve is within easy distance to explore. So, don’t only consider the beach and Luz during the warmer months! As with much of the Algarve, the summer can be hectic and very busy. Outside of the high season, Luz has a more unhurried charm and less of a beach resort feel, it’s our favourite time to visit Luz.

How to get to Praia da Luz?

Luz is 10km west of Lagos, or around 15 minutes by car. Nearly all public transport options connect in Lagos so if you’re using public transport, you’ll need to head to Lagos first. Lagos has both a train station and a bus station so there are several options. The most common buses are EVA or Frota Azul which depart most major towns in the Algarve including Faro, Albufeira and Portimão. The coach takes around two hours from Faro. Another option is to use the trains, which again depart from all major towns and even a few of the smaller ones.  Again it takes around two hours but you’ll need to book in advance to get the best prices. Once you’re in Lagos you’ll need a local bus run by the municipality to get to Luz. It’s the Onda Amarela (also referred to as Linha 4) and tickets cost € 1.60.

What to see and do in Luz, Portugal?

Although commonly referred to as a beach resort, that doesn’t mean the only things to see and do in Luz are the beach. In fact, if you’re less of a beach goer, Luz easily has a day trip or two worth of activities. Read on to find out!

First off, is obviously its namesake, Praia da Luz. It’s a large sandy beach sheltered by cliffs and rocks on each side. As the bay is sheltered, the sea waters are much calmer than elsewhere in the western Algarve. Although the climate is Mediterranean. The seawater is definitely not and might be colder than your expecting, only reaching a maximum of 20 Celsius at its high point. If you’re not into just lazing on the beach, then during the summer you’ll find various water activities being offered. Everything from banana boats, to water skiing, to kayaks and stand up paddle boarding are available.

A short walk along the palm tree lined promenade will lead you Prainha next to the Fort. It’s a much smaller and quieter beach with no services whatsoever. At hightide the beach is completely hidden. It’s a small beach surrounded by rocks. It’s more popular with people trying to avoid the hustle and bustle of the main beach, or with young families trying to find sea creatures in many of the pools and ponds hidden amongst the rocks.

A short walk along the beach promenade will lead you to the imposing Fortaleza da Luz or Castelo da Senhora da Luz. The fortress or the castle, both terms are used interchangeably, dates to around 1640. Although it’s widely believed that the area was fortified earlier on the same ground, no evidence has been found of it. It’s widely regarded as one of the finest examples of 17th century military architecture in the west Algarve. Originally designed to defend Luz and the wider coastline from pirates, privateers and Islamic forces.  Unfortunately, some of its most impressive features, recorded as 5m high walls surrounding it have been lost to the sea and sand. But an imposing polygonal plan and four bastions have survived. Nowadays there’s a restaurant and a bar within the rear of the grounds. The inside and rear of the fort is only open publicly for certain events.

An original church at the site dates to 1521 but was destroyed in the great earthquake of 1755. The Igreja Matriz da Nossa Senhora da Luz that we see today was rebuilt in 1874 from local donations.  Unfortunately, this would not be the only time it would need to be repaired and rebuilt as it suffered significant storm damage in 1941 and again in 1969. In its current state it’s an impressive white and yellow building against the beautiful back drop of the ocean.

On the eastern side of Praia da Luz is a large black cliff referred to as Rocha Negra. Compared to the surrounding sandstone cliffs the dark black colour is striking and it was created millions of years ago through volcanic activity in the region. If you want to get up close to them then it’s a short but steep hike that’s approximately 1.5km to the cliff. It’s a steep walk and for the physically active it offers some stunning views of Praia da Luz and the surrounding cliffs!

As a popular tourist destination there is a wide variety of restaurants in Luz. Some good, and unfortunately some less than good. During the summer nearly all will be full anyway! So if you have somewhere that you really want to visit make sure to book in advance. Here’s a list of some of our favourite and best reviewed restaurants in Luz:

Boaty’s Cafe – 100m from the beach Boaty’s is a tapas bar and pizzeria. It offers some great tapas dishes. When we visited, we were well looked after by attentive staff.

Sangam – Sangam is quickly getting a reputation as the best Indian restaurant in Luz. The food was excellent and a wide choice of specialties were available.

Aquario – If you’re after some amazing local seafood then look no further than Aquario. It’s clams and prawns are highly regarded, but it’s not only seafood that stands out!

Chicca’s Restaurant – This is a small but cosy restaurant with a very passionate owner. It offers some of the best vegetarian and vegan food in Luz.

Praia da Luz is the unfortunate setting for one of the biggest missing child cases in recent UK memory. In 2007, 3-year-old Madeleine McCann would be reported missing from her holiday apartment and was sadly never seen again. It quickly gathered global media attention and the handling of the case by both Portuguese and UK authorities faced intense scrutiny. Luz would gain an infamous reputation and the name would be widely known because of this. It again got renewed focus in late 2019 when Netflix released their documentary on the subject. We do think it is exceptionally poor taste to attempt to find the hotel and apartment. We were a little bit shocked to find both travel guides and newspapers listing the address. Despite this terrible case, Portugal is still one of the safest countries in the world and the Algarve is a safe place for families to holiday.

Somewhere to Stay in Luz?

Although Praia da Luz is relatively small it still has a wide array of accommodation options to suit all budgets. You’ll find everything from luxury resorts to delightful boutique hotels. There’s something for every budget and you can search the full list here!

Should You Visit Praia da Luz?

Praia da Luz is a great place that combines everything you could want from a holiday resort, while being close to some amazing scenery and nature. As it’s the last major resort town in the West Algarve it offers easy access to day trips to Sagres, Bordeira and Monchique while offering much more in the family friendly department than those smaller towns. We think Luz is very much worth a visit!

If there’s anything else, you think should be added to our guide to Luz then let us know in the comments!