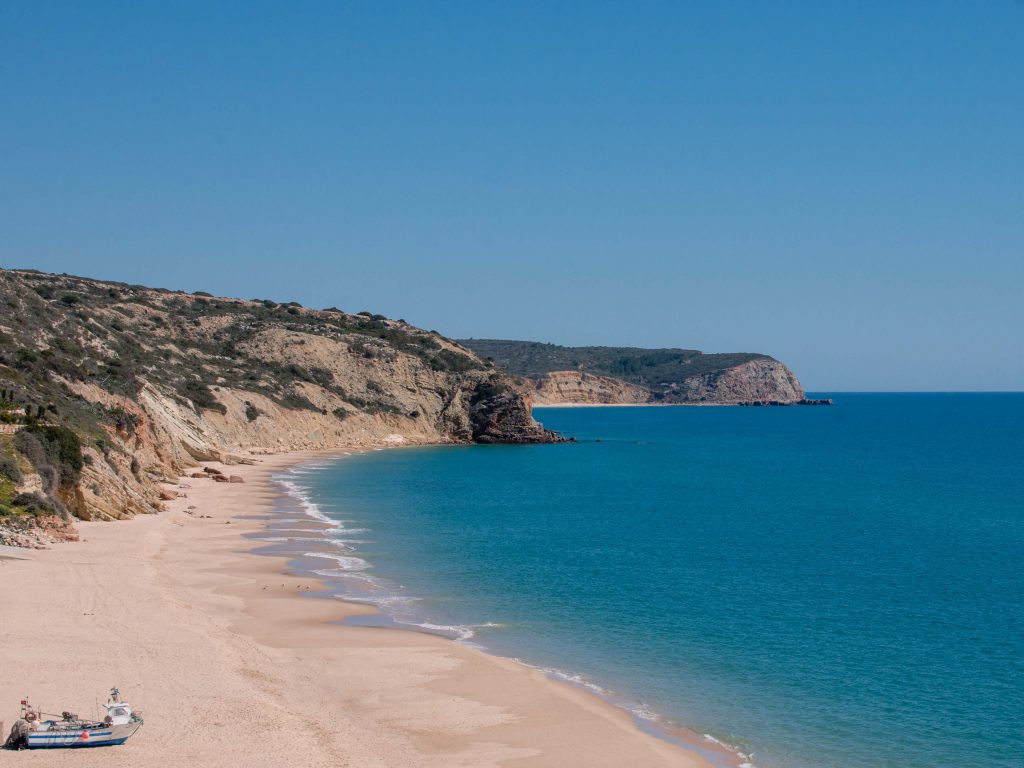 The western Algarve is more rugged and windswept than both the central Algarve and the eastern Algarve. Once you get passed the resort towns and villages it’s a place that attracts a bigger mix of surfers, walkers and naturalists than holiday makers and your typical tourists. Much of the coastline is surrounded by steep cliffs, but in between the cliffs are some incredible hidden beaches. Outside of the summer months, it can often be easy to stumble on an empty beach with some pristine waters! What’s included in the western Algarve? Well, it normally refers to everywhere west of Portimão to the Atlantic coast. Within this are traditional working cities like Portimão, also the Algarve’s second biggest. To small fishing villages like Salema, and inland mountain villages like Monchique. Despite being more rugged and wild than the central Algarve, the resort towns and typical services are not far!

The Places to Visit in the West Algarve

This is a complete list of the most popular and more typical destinations in the west Algarve. Many of these are popular with day trippers looking for something a little different and or for those looking for somewhere to base themselves at. Individual tastes definitely vary so you should read some of the guides below to get a better feel for the places!

Aljezur – Is a small historical town that’s situated on the doorstep to Parque Natural do Sudoeste Alentejano e Costa Vicentina. Atop a small hill are the ruins of a 10th century Moorish castle.

Alvor – Alvor is a small resort town that combines your typical beach resort with a traditional fishing town. Nearby are some great beaches and access to a wonderful natural park.

Burgau – Burgau is a picturesque fishing village now turned holiday resort. Its beach is sheltered by tall cliffs so offers a nice bay and calmer water for families.

Monchique – Algarve’s quintessential mountain town.  It has some great walking and beautiful views over the Algarve. Nearby Foia, the highest place in the Algarve offers incredible views back to the coastline.

Odeceixe – Odeceixe and its beach are the most north western town in the Algarve. It’s a rural town that’s part of the Costa Vicentina Natural Park. It’s gentle river that flows towards the beach is the ideal place to try canoeing, kayaking or paddle boarding.

Sagres – Sagres is a small town on the very western tip of the coast. Its beaches are popular with surfers and kite boarders. It’s popular with day trippers too, making the journey to the sheer cliffs of the Cabo de São Vicente.

Vila do Bispo – A traditional countryside town that’s often a stopping point for people travelling to and from Cabo de São Vicente. It offers a few restaurants, cafés and supermarkets.

Lagos – Lagos is the last major town as you head west. It boasts plenty of history and culture, famously being the departure point for many of the Age of Discovery voyages. With plenty of hostels, it’s also popular with backpackers and surfers, and more traditional holidaymakers looking for somewhere less clean cut than Albufeira.

Portimão – The largest city in the western Algarve and the Algarve’s second largest overall. It’s less touristy than nearby towns and more associated with the local and working population of the Algarve.

Praia da Rocha – An extension of Portimão that can be considered its more pristine beach resort. It’s the closest you’ll find to a major resort town in the western Algarve and not too unlike many in the central Algarve. Highrise hotels and a smallish strip of bars, restaurants and a casino.

Transport in the West Algarve

Although Faro is technically the ‘Central Algarve’, Faro airport is also the only international airport in the Algarve region. To discuss the transport options in west Algarve, it’s practical to start with the main international arrival airport! The one thing to consider is that Faro airport is around 15 minutes outside of Faro itself. To make connections by public transport like to the train and bus station you will need to get to the city centre first. To get there it’s a short ride on a local bus (the no.14 or the no.16 ). The cost is €2.35 for a single ticket and is operated by Proximo. Taxis are also available and the journey should cost around €10, or a €5-6 Uber ride.

Trains and Train Stations in the Western Algarve

A few of the major towns of the west Algarve are serviced by a trainline that runs from Faro in the centre to Portimão and Lagos. Lagos is as far west as the trainline goes so from their you’ll need to use other local transport. The journey from Faro to Lagos takes approximately an hour and 45 minutes. In the west Algarve there are four train stations Lagos, Meia Praia, Mexilhoeira Grande and Portimao.  Trains are seen as the slower, scenic route and perhaps not the most convenient. But they are a cost-effective way of travelling to the bigger towns from Faro. To get the best prices you will need to book in advance though. Unlike the central Algarve, the train stations are located much closer to the towns they serve, usually within easy walking distance.

The Western Algarve by Coaches and Buses

Buses and coaches also serve the western Algarve, servicing most major towns and resorts. While smaller locally operated buses can get you a little bit further from the coast. The main operator is EVA and in general they depart Faro and head west along the coast to Lagos, but also to Sagres. EVA offer a tourist pass for 3 or 7 days that allows unlimited travel. If you’re planning on multiple journeys, then one of these passes might be a good idea. A 3-day pass is €30 and a 7-day pass is €38. Return trips cost between €7-10, so if you’re visiting multiple towns it’s a good way of saving money. For the occasional journey though it’s probably not worth it. Frotazul are smaller company that also work across the central and western Algarve.  They’ll get you to Lagos in the west and as far as Odeceixe in the northwest.

Car Rental in the Western Algarve

Car rental is widely available across the whole Algarve. Rental offices are available at Faro airport and even the larger towns and resorts in the western Algarve like Portimão and Lagos. Using your own vehicle is a great choice and offers more freedom and flexibility then many of the other options. Some of the best places and smaller trips can be hard to manage by public transport. Stopping off at a random cliff for a photo or visiting the highest point in the Algarve is easier and cheaper with your own car. If you’re thinking of renting a car you should read our guide to car rental in Portugal. It will explain all of the costs, and if and how you can avoid them!  The main takeaways are that as long as you book in advance and watch out for the extra costs car rental can be an affordable option.

Should You Visit the West Algarve?

Absolutely yes! It’s perhaps the most scenic and ‘real’ Algarve there is with something for everybody. This is a great introduction to the west Algarve, and if you’d like more in-depth information then we recommend you take a look at a few of the guides we’ve posted above! If there’s a place or a town you think would make a good addition to this guide let us know in the comments!