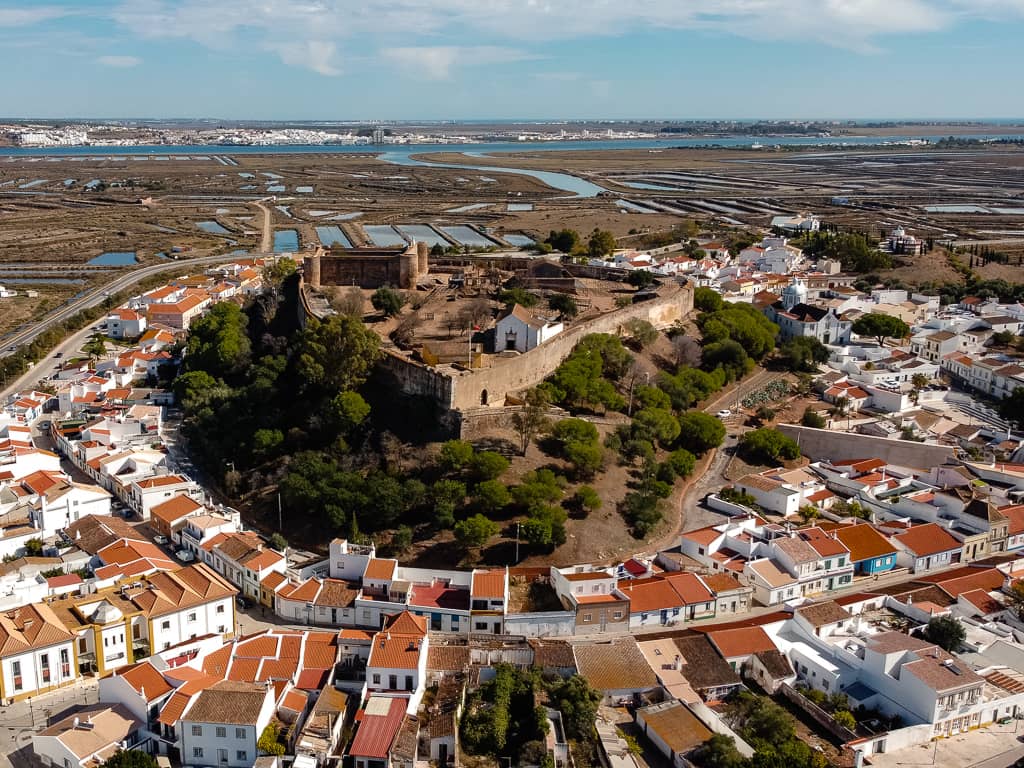 Hidden between a nature reserve and the Spanish border is the ever so unique village of Castro Marim. It’s surrounded by wetland, salt ponds, and sandwiched between a 13th century castle, and a 17th century fortress. It’s long history of fortifying the border with Spain is prominent. Within the village you’ll find the slow-paced life the Algarve is famous for. With just a little bit of everything. Castro Marim is great place to day trip and experience a little bit more of the authentic Algarve.

What to See and Do in Castro Marim?

When you first arrive in Castro Marim you’ll be greeted by a large medieval knight on a roundabout – Estátua do Cavaleiro Medieval. It’s a great metal sculpture by a local artist and a nice introduction to this former military town. On one side of the entry road you’ll see the patchwork of wetlands and salt ponds. Rising in front of you, you’ll see the 13th century castle on the hill. It’s an impressive entrance to the history of the town. If you’re arriving by car, there’s a large car park available for free at Rua São Gonçalo de Lagos. From here it’s a short walk into the village and up to the castle.

It’s believed that Castro Marim, and the hill Castelo de Castro Marim is located on has been fortified for nearly 5,000 years. Remains of Phoenicians, Carthaginians and the Romans have all been found in the area. The village itself was occupied by the Moors until 1242 when it was captured by Afonso III during the reconquest of the Algarve. In 1274, a charter would be issued to encourage the settlement of Castro Marim and at the same time ordering the construction of a fortress to protect the new frontier.

Within Castelo de Castro Marim there are two periods of construction. The original castle Castelo Velha which is commonly referred to as the keep, is a roughly square design with four cylindrical towers. This keep is believed to have been Moorish but saw significant improvements under Afonso III’s direction. The Castelo de Fora, that’s the extension of the walls which surrounded the entire hill. These were a later development and are what’s seen as the castle today. It was during this period that Castro Marim begins to be known as a significantly important town in the Algarve.

The entire town was donated to the Military Order of Christ, the remnants of the Knights Templar in Portugal in 1332. In part due to its strong defences, but also for its position on the frontier of Portugal’s enemies. In 1334, the order moved their headquarters to the now famous, Tomar. On their way out donated the settlement and its fortifications to the Order of Santiago. The Order of Santiago would go on to build the church Igreja de Santiago within the walled castle which can still be visited today.

From the castle walls, you can look down and see the village as it has expanded. Originally, the settlement would have been contained within the castle, but the 1755 earthquake raised the village almost entirely. It was rebuilt outside the Castelo de Fora. Once you’ve looked around the castle and taken in the views of both the village, the Guadiana and into Spain, it’s probably about time for a coffee. Several coffee shops line an idyllic praca in the centre of the village and it makes a lovely place to stop, catch your breath, and enjoy a fine Portuguese café.

If you’re not quite done with the town’s history, then on the opposing hill to the castle is the more recent 17th Century Forte de São Sebastião. It was constructed during the Portuguese Restoration War of in 1640 under the direction of King João IV. This was at the advent of gunpowder and cannons. A large hill opposing the original castle was seen as a significant weakness to its defensive capabilities. War would soon break out with Spain and Castro Marim would once again be on the frontier of one of Portugal’s enemies.

During this period, two additional lines of defence would be constructed. One turning the whole village into a fortress by surrounding it with walls that extended from the castle to the opposing hillside. The second by creating Forte de São Sebastião at the highest point on the opposing hill. This would be a smaller fortress, encompassed by bastions and walls, creating a fortress within a fortress village. It’s hard to picture, especially with the connecting walls now demolished and the village much more spread out. For a better overview take a look at this 1720 map of the fortress and castle.

At the same time, Castelo de Castro Marim was modernised. Its walls would be thickened, and new towers and bastions would be added. The final defence would be the Revelim de Santo António. Although often referred to as a fort, compared to the castle and the fortress itself, this is more of an outpost on the outskirts of the fortress, but it served an important purpose.

The Revelim de Santo António faced directly towards Spain and overlooked the flat wetland, between the edge of the Guadiana and Castro Marim. It was linked to the main fortress by a wall running along the north side of the ridge. Its function was to watch over the river channel and to warn the main fortifications of any advancing troops or boats making the crossing. Located within the walls of the Revelim are the Capela de Santo António (St Anthony’s Chapel), a traditional windmill, and the local interpretation centre housing a small museum. The centerpiece of the interpretation centre is a scale model of the region, with all of its features labelled. You’ll also find information boards and even binoculars for looking at the surroundings from the hilltop.

On the rear side of the hill, the slope facing the Guadiana river, is the delightful Jardim Andaluz. It’s a small but well sculptured garden showcasing traditional Andalusian architecture and plants. You can access it from the Revelim and as you wonder down from the hill, you’ll find a pretty garden and an array of gazebos and pillars to provide shade from the hot sun. Within the garden are waterfalls and fountains, and lots of bright blue tiles and benches. Depending on the time of year, you’ll be surrounded by blooming citrus trees, olive trees, flowers, and local herbs. With a view across to Spain, and into Vila Real de Santo Antonio it’s a wonderful place to stop and take it all in.

Heading back to the village, you’ll find at its centre the large white church Igreja de Nossa Senhora dos Mártires. Compared to the bare rock forts, the large white structure and its impressive dome stand out. The church was originally built sometime in the 16th century, on top of a former chapel. However, the great earthquake of 1755 would turn the building to rubble. Following this it was restored in the 18th and 19th century, but would only be completed in 1834. Inside the church you’ll find several historic and beautiful statues. The statue of archangel Gabriel (16th century), the statue of Santa Luzia (18th century) and a statue of Nossa Senhora da Encarnação e dos Mártires (16th century). The church is well worth visiting.

Hidden within the nature reserve is something truly unique. As far as I’m aware it’s the only one in the Algarve. During the warmer months you can actually take a dip in one of the old salt ponds as part of a relaxing spa experience. A range of treatments, massages, and yoga classes are available. However, the most popular is a simple salt exfoliation, a clay mask, and a long soak in the salt pond. The entire facility is run by Agua Mae and you’ll find the full details on their website. Not only are they a spa facility, but they are also a traditional producer of both sea salt and the highly prized Flor de Sal. All the salt ponds around that you can’t relax in? Well they’re actually still used for salt production. You’ll find a wide variety of sea salt and Flor de Sal to purchase in their shop! The Spa is usually only open from Spring to Late Autunm but you can check directly on their Facebook page for their latest opening times!

Now for the nature and wildlife lovers. You’ll see there really is something for everyone in Castro Marim. Reserva Natural do Sapal de Castro Marim e Vila Real de Santo António is the full name of the 2000ha reserve that stretches from Castro Marim, all the way to the Guadiana. It’s a haven for bird life and some of the most common visitors are the white stork, greater flamingos and the black-winged stilt. The best way to experience it is with a hike or by bike. An itinerary and guided route is available from the Interpretation Centre. Following informational signs, you’ll be guided along a trail that leads you through the salt pans, marshland areas, small channels and bodies of water, all the way to the edge of the Guadiana river. Full details of the hike can be found here. Smaller and less time-consuming hikes are also available, perhaps just around the salt ponds or to a small bird watching hide.

Somewhere to Stay in Castro Marim?

Castro Marim is definitely less of a resort town than many other places in the Algarve, but it still has a couple of gems when it comes to places to stay! If you’re looking for something luxury take a look at Castro Marim Golfe and Country Club. You can find the full list of options here, alternatively you’ll find a wider selection of hotels and resorts in Monte Gordo just over 7km away.

Should you visit Castro Marim?

Castro Marim really does have a little bit of everything you might love about the Algarve. History, culture, nature and the gloriously slow pace of life that inhibits many of the smaller towns and villages. Just about the only thing it doesn’t have is a beach. Which is why it might be missed off people’s itinerary quite frequently. However, there are several exceptional beaches located in the resort towns of Monte Gordo and Manta Rota just a few kilometres away!