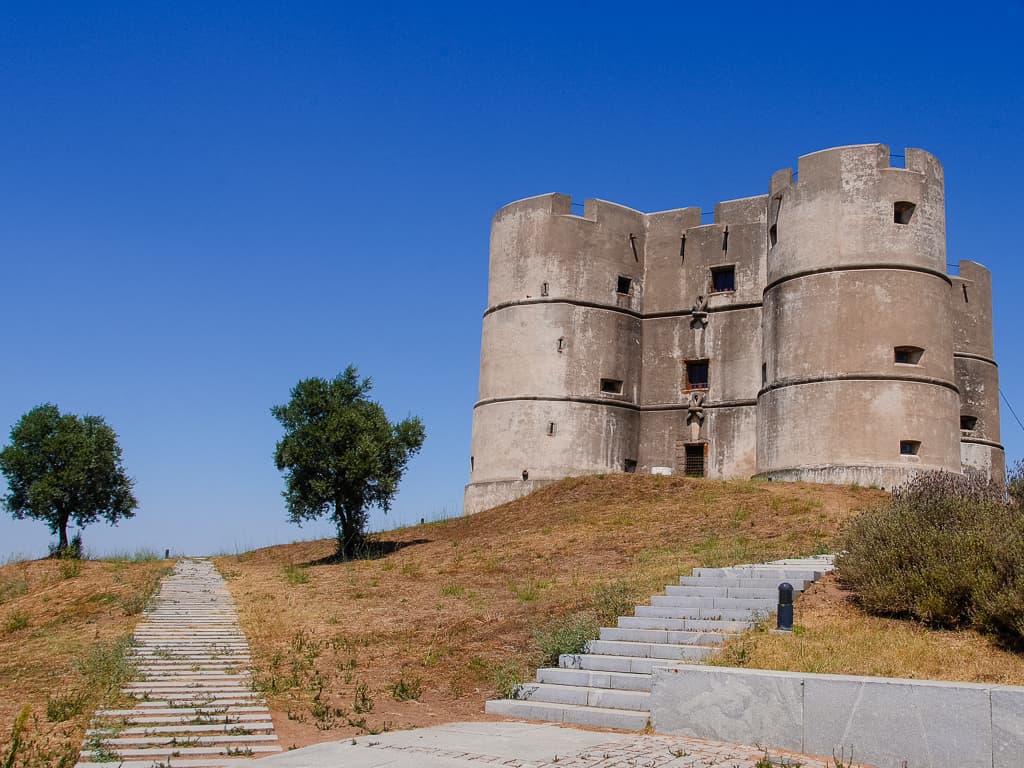 Many places in the Alentejo could be taken straight from fantasy films; walled villages, beautiful castles and timeless countryside. One that makes this list is the delightful village of Évoramonte. It’s a small village of just several hundred people surrounded by centuries old walls. In the middle of them, a unique castle and like much of Alentejo, it seems paused in another time.

The village today is divided into two distinct areas: the Vila Velha (old village), and the lower village. Currently, Évoramonte has a population of around 570 people, with most of that number concentrated in the lower village. In the old village, and within the walls are the homes of only around 30 people. When you’re exploring the old village, it can sometimes feel like you have the entire place to yourself. While the newer village, has all the resources, and facilities you’d expect. Within the lower village area you’ll find multiple services and facilities, including a post office, pharmacy, multibancos (ATMs) and a wider selection of bars and restaurants.

What to see and do in Evoramonte, Portugal?

Passing through the walls and into Vila Velha is an experience in itself. The only entrance accessible to cars is on the north-east wall, and the drive up to it is impressive. The village itself, only really has one street, so driving isn’t necessary unless you have accessibility issues. Parking is available in both the new village, and about halfway up the hill near the Ermida de São Sebastião. If you’re taking this route, then you can actually enter the village through a smaller, pedestrian-only entrance in the historic walls. The north-eastern gateway is just wide enough to fit a small car through. If you’re lucky you’ll find a place to park. As you wonder through the streets, you’ll find lots of details, historical monuments, and curiosities to discover before making your way up to the castle. As you walk around, keep an eye downwards. You’ll be able to find the work of a local artist on individual cobblestones as you walk around the little streets.

The first you’ll pass is Casa da Convenção de Evoramonte. It’s a completely unassuming building, that looks comparable to any of the other whitewashed and rectangular houses you’ll find within the walls. It holds an impressive secret though. In 1834, it was the place where the peace declaration was signed between the liberals and the absolutists. Which brought to an end the Portuguese Civil War. Other than the name of the street – Rua da Convenção, you’ll only find a white marble tile commemorating the historic event on the outside of the house.

Further along the same road you’ll find the Paços do Concelho de Évoramonte, the original and historic townhall for Évoramonte. It’s a whitewashed building, tipped with yellow, and features an arch through one of its lower levels. Today it’s still marked by the town’s historic arms and the date 1787. It actually houses the tourist office on its lower levels. Opposite the building, you’ll find the remains of the former Pelourinho. When we say remains, we really do mean that. The Pelourinho was constructed out of white marble from nearby Estremoz and marked the administrative authority of the village. Today, all that’s left of it, is about 30cms of the original pillar and the plinth it would have stood upon. Curiosity, yes, photo worthy, perhaps not.

When approaching Évoramonte from any direction the first thing you’ll notice is its imposing castle on top of the hill. The hill itself is just over 480m above sea level and is one of the highest points in the Serra de Ossa. The castle, sometimes referred to as the torre (tower) or Paço Ducal (Ducal Palace) is a unique example of a combination of military architecture and Manueline style.

The tower was originally constructed to replace the earthquake damaged keep. While at the same time built to impose the wealth, power and dominant position of the house of Braganca on the region. It’s doubted that it was ever lived in but it did serve as a retreat or a hunting lodge for the family and their friends. It’s definitely one of the more unique castles in the region. A combination of contemporary 16th century military design, while exuding the wealth of the Manueline period. Other castles and palaces of its architect’s (Francisco and Diogo de Arruda) design can be found in nearby Vila Vicosa.

The tower itself is a rectangular building that includes four circular towers. Interestingly, the castle is telescopic, its base is much wider than at the top of its three stories. It’s four turrets are crowned by large defensive merlons, and each of the floors are clearly marked on the outside by cornices. A typical feature of Manueline architecture. These cornices are one of its most famous features. They form a rope around the entire castle and the ropes form knots on the front and back of the castle at each level. It’s a truly unique castle, with truly unique features. At three stories high, the views from the top are simply superb. At more than 500 meters above sea level, you get 360-degree views of the incredible Alentejo countryside.

After taking in the sights and sounds of Évoramonte it’s probably about time for a refreshment, or perhaps a glass of some fantastic Alentejo wine. The Place at Evoramonte, a delightful bed and breakfast within the old village also operate a lovely café, called The Café at Evoramonte. Luckily it’s great, because its the only café within the old village. Their terrace offers incredible views, their selection of food and drink is excellent, and it’s the perfect place to watch the sunset. Alternatively, you can head down towards the lower village, you’ll find several more bakeries, pastelarias and snack bars available.

Évoramonte might be tiny, but it packs a very impressive punch. With the likes of Evora, Estremoz and Elvas nearby it’s the perfect stopping point for any road trip in the Alentejo. It’s castle and long history is unique in the region and its a wonderful place to discover!