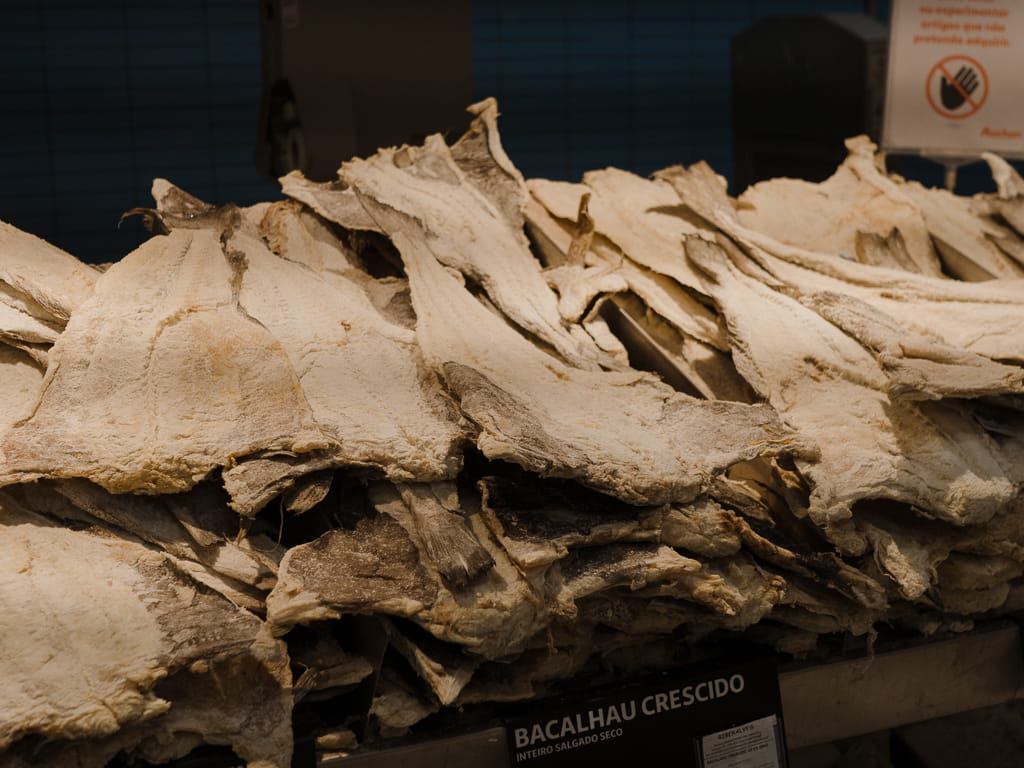 Bacalhau is perhaps one of the most famous parts of Portuguese cuisine. Maybe as synonymous with Portugal as a pastel de nata, or grilled sardines. The curious thing about it though? Bacalhau isn’t actually Portuguese, although today it’s not easy to find out. What is bacalhau? Well, the direct translation for bacalhau is quite simply cod. However, the direct translation isn’t its usual meaning. Whenever bacalhau is mentioned, people are normally discussing a specific type of bacalhau. That’s the dried and salted kind you’ll find all over Portugal. Amazingly, you’ll find it in a rumoured 1000 recipes across Portugal. So how did a dried and salted fish, become an essential part of Portuguese Cuisine? Especially, when Portugal has an abundance of fresh fish much closer to home?

First up, let’s explore bacalhau. It is simply dried and salted cod. The traditional method to salt and dry the cod fish involves cutting the cod along its length and hanging it from its caudal fin (that’s it tail). Drying and salting results in cod that can be stored indefinitely and without refrigeration. The traditional method would have been to let the fish dry on wooden frames, or simply rocks, and a combination of salting, wind, and exposure to the sun would dry it out. This method is believed to have been used for well over 1000 years, as far back as the Viking era. Who reportedly, spread the practice across the North Atlantic, where cod is common, and other food sources are not. If you know your geography, you’ll know Portugal is not a north Atlantic country, nor did it have access to large quantities of cod. So just how did the Portuguese get their hands on the stuff? And how did it become a food staple and one of its most famous menu items?

Portugal and Bacalhau – A Long History

Sometime in the late 1500s, a combination of western European fisherman (the likes of the Portuguese, Norman, Breton, and English) discovered huge quantities of cod in the Grand Banks area of Newfoundland. They faced one considerable problem though, shipping the cod back to the lucrative markets in Europe. Salted fish wasn’t a new idea, but it was the first time it was used to allow shipping over large distances. Originally, the salting and drying would have occurred on the shorelines around Newfoundland. However, the colonial British soon put a stop to rival fisherman landing their catches and processing their cod in British territory and ports. This meant they now needed to process their fish onboard before sailing home.

This led them to developing a new technique. They would gut and heavily salt the fish on board, then pack them in tight crates to be shipped back to Europe. Once in Europe, the salty brine or pickle was washed off, and the cod could then be air dried on warmer shores. This kick started the industry that still exists in some parts of Portugal today. Visitors to the fish markets of Lisbon and Figueira da Foz can still witness the airdrying of salted cod.

Interestingly, the practice and taste has continued well into the modern era. The arrival of steam, and factory fishing boats, able to catch, prepare, and freeze fresh fish in huge quantities changed the fishing industry and markets considerably. However, the habit of eating salted cod, and not fresh, remained here in Portugal. This was due to several unique situation in the domestic market of Portugal in the early 20th century. Interestingly, this development can be partially credited to the Dictator, Salazar in the 1920s.

Fresh from his economic studies, and in the early stages of his leadership he’d witnessed the social upheaval caused by rising prices of the cod supply in the 1920s. Bacalhau was the primary protein staple of the working class in many of Portugal’s industrialising towns and cities. Salazar made it a national priority to ensure a constant and affordable supply of bacalhau on the Portuguese market. Today it’s known as the bacalhau campaign and it was a considerable goal of his economic policy. At the same time, social and political propaganda was used to spread a new narrative of bacalhau being a traditional part of Portuguese society and its ocean heritage. Some sources even point to this campaign as the origin of the 365 or 1000 ways to prepare it!

Are there really 1000 Ways to Serve Bacalhau?

The phrase is a popular one and it’s often repeated. Another one, is that there’s over 365 recipes, one for every day of the year. As far as I’m aware no one has compiled a complete list (maybe we’ll do it one day). But we can share a few of our absolute favourite ways to enjoy bacalhau in Portugal and abroad!

Bacalhau à Brás is perhaps the most famous bacalhau dish, due in part to Lisbon’s popularity as a tourist destination. The dish was reportedly invented there, and usually always features on lists of food you have to try in Portugal, or Lisbon. It’s a deliciously simple dish that consists of a combination of bacalhau, mixed together with shredded potatoes, eggs, onions, garlic, parsley and topped with olives. It’s rumoured to have originated in the Bairro Alto neighbourhood of Lisbon, by a local Braz. Which is why you’ll sometimes see an alternative spelling Bacalhau à Braz.

Although not the most famous, it makes this short list because Bacalhau com Natas is one of our favourites. Diced potatoes, onions, bacalhau, lots of cream or bechamel, topped with a good cheese and baked in the oven. It’s true comfort food that’s simple to make at home!

Compared to some recipes, this way of preparing Portuguese salt cod, might seem a little modest, but that’s part of the beauty of it. It’s quite simply grilled or roasted bacalhau drizzled with olive oil. It’s a simple dish that’s often served with potatoes and grilled or roasted vegetables. The secret though, is high quality ingredients, you need fantastic olive oil and good local ingredients.

Now for a less well-known variation of bacalhau. This one originates in the northern Portuguese city of Braga. The traditional recipe involves serving cod topped with a braised mixture of sliced peppers, sliced onions, garlic, olive oil and sliced potatoes. If the other dishes don’t have enough veg for you then this is a great option!

Pasteis de Bacalhau, bolinhos de bacalhau, codfish cakes, saltcod fritters have multiple names, both in Portugal and abroad. They’re all essentially the same thing, a deep-fried fish cake. If the other recipes are a little too healthy for you, then this combination will definitely get you excited. They are made with a combination of mashed potato, bacalhau, eggs, parsley, and onion. Squeezed into a bit size shape with two spoons, and deep-fried. They are an incredibly popular appetizer at many cafés, snack-bars and restaurants across Portugal.

Where should I buy Bacalhau?

If you visit pretty much any food market or even supermarket in Portugal you will find, and smell the bacalhau section quite easily. Due to its curing process, the cod does not need to be refrigerated and its rarely packaged before sale. You’ll find boxes or huge pieces of cod simply stacked up and ready for purchase. It’s sold by the kilo, and due to its tough nature, you’ll often see an array of power tools and saws to cut the pieces up for you. The most common method of preparing bacalhau is to soak it in water for at least 12 hours, this serves to both soften the meat and to reduce the salt content. You’ll find pre-soaked bacalhau in both the refrigerated section, and the freezer section of your supermarkets if you’re short on time. One thing to mention, the word bacalhau always refers to dried and salted cod. If you’re looking for fresh cod, you’ll need to specifically ask for bacalhau fresco.

How to buy Bacalhau?

Once you’ve found the bacalhau section the next thing you’ll notice are its different names and the different cuts and weights. It will also normally have its country of origin listed as well. These descriptions range from Especial, the largest, to Sortido, which is almost the off-cuts and broken pieces. Especial will be the largest, and most expensive pieces. Just because it’s the premium option, doesn’t mean that’s the best bacalhau to buy. Many recipes typically break or tear the bacalhau into smaller chunks so the lower grades and weights have their place in the kitchen too.

Once you’ve chosen the grade, you can then ask for how much of it you want at the fish counter. Although it seems confusing, you don’t need to commit to buying the whole piece of bacalhau. You can simply buy as much as you need and pay per kg of fish bought!

There you go! Everything you need to know about tasting and buying Portuguese bacalhau! If you’re looking for recipes, take a look at our recipe for Pasteis de Bacalhau, it’s a great introduction to cooking with it! Let us know in the comments what your favourite way to eat bacalhau is!