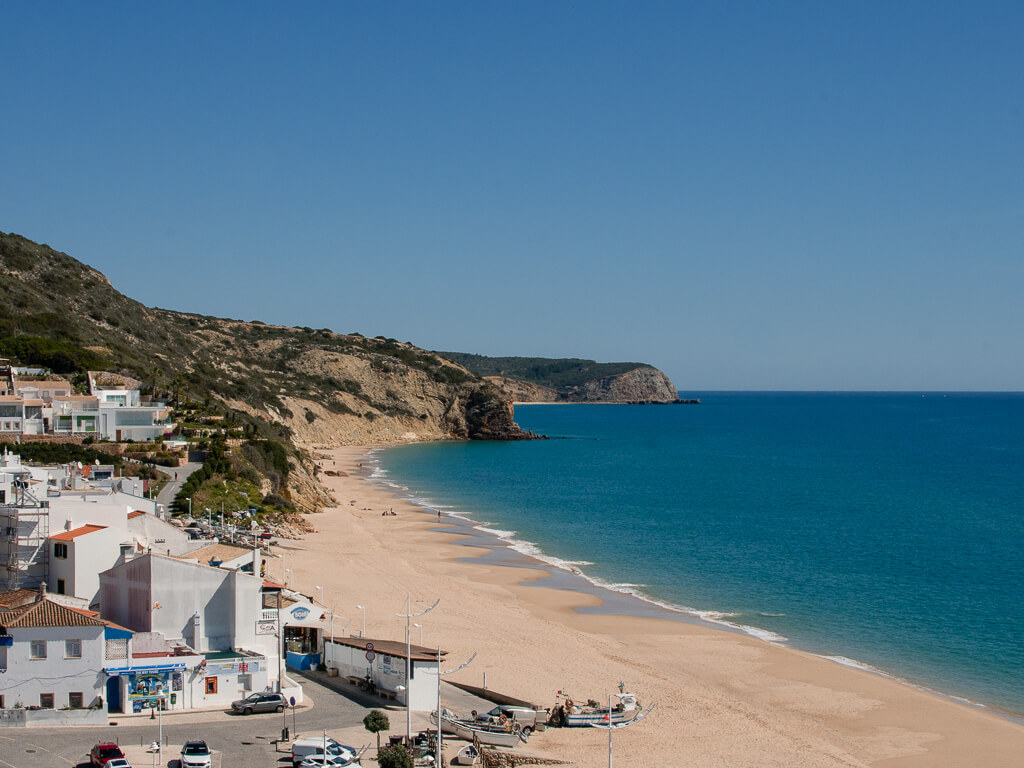 While much of the central coastline of the Algarve has seen heavy development, the west remains relatively unspoiled. Among its cliffs and beaches, you can find an array of villages and towns perfect for day trips. One of these tiny towns is Salema, a small town with a long history as a fishing village. Although, the hillsides surrounding the town are dotted with holiday homes and accommodation, Salema still has its traditional fishing village at its heart. Central to the beach is the boat launch, where you’ll often see fisherman tending to their boats or their nets. Along the small streets you’ll find cafés, bars and cosy restaurants. For the active there’s some stunning clifftop walks to really get a feel for the west Algarve.

How to find Salema?

The tiny town of Salema sits just a couple of minutes off the N125 that runs across the Algarve. It makes it a great stopping point for people travelling to Sagres or Farol do Cabo de São Vicente. If you don’t have private transport, then the only public transport is the local bus services operated by EVA. They go from Lagos to Sagres (EVA 47) or Lagos Vila do Bispo (EVA 82) and both stop in Salema. A single ticket is €2.80 and a return ticket is €5.60. Lagos is accessible to the wider Algarve by both regional bus and train service.

What to see and do in Salema?

Once you’ve arrived in Salema, you’ll find its really very small and centred around a beautiful bay. You’ll most likely arrive into a lively square. It’s actually a car park that’s surrounded by café’s and leads directly on to the beach. Follow any of the steep cobbled streets that lead on to this square and you’ll find more cafés and bars.  In nearby fields of wildflowers, storks nest on telegraph poles. If you find the central parking full, the additional parking is clearly marked.

Salema and Praia da Selema are usually referred to as the same place, either because it that small or because it’s that focused on the beach! The kilometre long beach, with its fine golden sand, repeatedly gets Blue flag certification year after year. This means the beach meets exceptional standards for water quality, beach access, and family safety. The small bay means the waters are relatively sheltered, as the waves are small, the surfers prefer to go elsewhere in the west Algarve! With a gently sloping and clean beach, it’s great for families and young swimmers. Even at high tide, Salema’s beach has a wide strip of sand for you to relax on. The main thing to consider is the sea water itself, they can be unexpectedly cold for people not used to Atlantic swimming!

As a popular and family focused beach, Praia de Salema offers all of the usual beach facilities. The beach is life guarded during the summer season, and there’s an array of sun lounger and parasol rental services. There’s toilet and shower facilities and an array of cafés, bars and restaurants with beach views for refreshment.  People seeking more activities can also find bodyboard, kayak and stand-up paddle board rental near the beach. Or lessons and tours can also be arranged.

At either end of Praia de Selema are the typical gold and orange limestone cliffs typical of the Algarve. Some of the oldest sections actually date to the Lower Cretaceous period, so they’re around 150 million years old! It is among these layers of limestone rocks that fossil hunters can be rewarded with the remains and fossils of marine life, and even dinosaur footprints.

On the western end of the beach is where these are most visible. At low tide you might have to scramble up some rocks. Or you can reach them from above by a nicely maintained set of stairs at the cliff top. You can find a large shelf like platform among the rocks with several different dinosaur footprints. These footprints were ‘discovered’ by archaeologists and geologists from the University of Lisbon in 2001. Although if you ask the locals, they’ll tell you they always knew there where the dinosaur tracks were hidden!

The clearest set of dinosaur footprints are located on a shelf a few steps west from the staircase. They’re relatively easy to spot and form a line several meters long. It’s believed from the size and shape of the footprint that they belonged to a herbivorous biped called an Ornithopod. The name Ornithopod comes from the Greek for ‘bird-foot’ and from the footprints you can see the characteristic outline of a three-rounded-toed dinosaur. If you chat to the locals, they’ll tell you there are plenty more remains to find among the rocks, shelves, and hidden beaches of the coastline!

For the more active Salema has access to some incredible cliff top walks in both directions. The first is from the cliff top where the stair access is. If you follow a small track west from here, you can walk and find two deserted beaches of Praia Santa and Praia da Figueira. Outside of peak season its rare to find these occupied as the only way to get there is to walk along the cliffs and through the scrub. The walk isn’t clearly marked by signposts but is easily followed by the dusty trails that you can see on Google Maps.

The second and perhaps more impressive hike is to head east along the coast through the Boca do Rio nature reserve, and on to Praia da Boca do Rio. It’s a smallish hike of 2.5km but offers stunning views of the surrounding coastline. It can be extended by hiking from Praia da Boca do Rio to the Fort of Almádena up on the cliff side.

If you drove to Salema, it’s possible you drove through a small valley between the towns of Burgau and Salema. This small valley actually forms the Boca do Rio Nature Reserve which is a small wetland created by two streams meeting and draining towards the beach of Praia da Boca do Rio. Due to the valley’s proximity to the coast, it’s a haven for many migratory birds to stop and feed in. On Praia da Boca do Rio there are no beach facilities other than a few picnic benches and rubbish bins. Due to its location outside of both Burgau and Salema it’s a popular camping spot for an array of campers, campervans and caravans.

Forte de São Luís de Almádena to give its full name is a 17th century fort located on the cliffside above Praia da Boca do Rio. The fort was completed in 1632 and served to protect the coast and the valuable tuna fisheries from pirates and privateers. In addition to being defensive, it was also an important strategic point along the southern coastline of the Algarve. Essentially a midway point between the Fortress of Sagres and the town of Lagos. From its cliff top position, it offers views from Sagres all the way to the bay of Lagos. The oldest drawing of the fort from 1754 reveals the original polygonal plan, with lower and higher batteries at the rear of the fortress. Both of which would have been armed with cannons. At the front of the fort were two bastions, a moat and a drawbridge.

It was abandoned by the military in 1849, and transferred to the local municipality in 1946. Unfortunately, it is now in a pretty bad state of degradation and only seems to be getting worse. Many of the outer walls have collapsed, and the lower battery is missing completely. From the front, its main armoury gate, walls and moat survive. As do the barracks, and several vaulted rooms, one of them believed to be a chapel. It has a small car park and an informational post. It’s free to park and explore if you don’t fancy the walk.

Somewhere to Stay in Salema?

Salema is a small village but is has several great options if you’d like to stay. Hotel Residencial Salema is a favourite of ours. it’s a simple hotel that offers great breakfast less than 50m from the sea! You can find the full list here that has a range of budgets.

Should you visit Salema, Portugal?

Salema is perfect for a day trip in the West Algarve, or a stopping point to take in some sea views and a fish lunch. Unless you’re looking for a truly relaxing and family friendly beach break, you may want to look elsewhere for longer stays though!