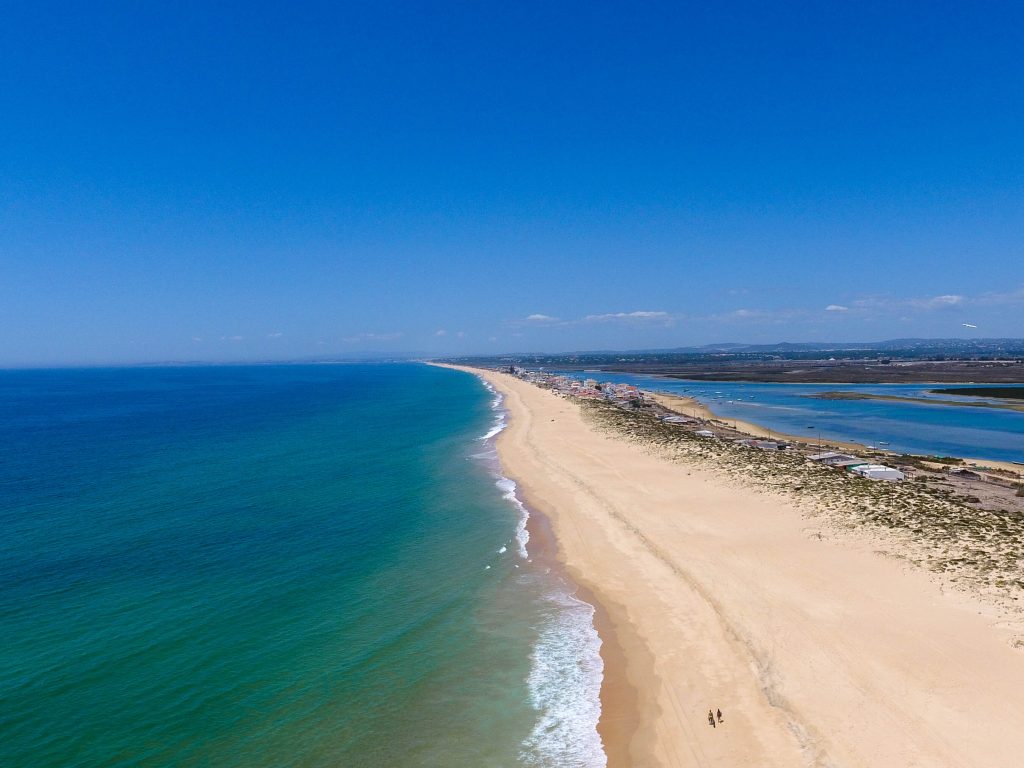 Praia de Faro is often seen as more of a local’s beach, than and out and out tourist beach. That doesn’t mean Praia de Faro should be skipped! It’s a thin strip of beach facing the ocean on one side and facing the Ria Formosa lagoon on the other. Stretching for nearly 9km, it means there plenty of room to take a stroll and find your own space. It’s also less developed than other nearby beaches and offers plenty of nature for those that would like to spot some wildlife. Read on to find out more about visiting Faro’s beach.

Where is Praia de Faro?

Praia de Faro is located on a small island called Ilha de Faro, approximately 10km by road from the city of Faro. Despite being called Ilha and often referred to as an island, it’s technically a peninsular and connected to the mainland 9km away. On one side of this island is the sea and on the other side is the Ria Formosa lagoon. Access to Ilha de Faro is over a single-track bridge, crossing a small section of the Ria Formosa. The bridge is single-track for vehicles but has enough space for people to walk across it at any time. On either side of the bridge is a set of traffic lights controlling traffic flow to and from the island. The traffic lights are a considerable bottleneck, so on busy days traffic piles up long before them. Up until the bridge, the roads are good though.

How to get to Praia de Faro by Public Transport?

Praia de Faro is easily accessible from the city by public transport. However, buses don’t actually make the crossing on to Ilha da Faro. They stop at the traffic lights just before the bridge to turn around. This is the bus stop and you then make the short walk over the bridge on foot. The bus costs €2.35 for a single ticket each way and there are no return tickets available. You’ll need either the no.14 or the no.16 which is operated by Proximo from the city. As well as a bus route, during the summer high season you can also get a ferry to Praia de Faro from Faro marina. It’s the much more scenic route that offers a quick introduction to some of the Ria Formosa lagoon. The bus is the more regular route, while the ferry is more of an adventure. The ferry costs €3.20 for a return trip for adults, and €1.50 for children.

Vehicles can queue up and cross the single-track bridge to drive on to Ilha de Faro. When you cross the bridge, it leads to the biggest car park and perhaps the most popular area for tourists. The car park is surrounded by multiple bars, cafes and restaurants. Vehicles can also drive in either direction of the island, approximately 1.5km east and 1km to the west. During the summer parking can get very busy and you may have to park much further away from the central area. But this will lead to the quieter and more deserted beaches. Approximately 1.5km away from the beach and on the mainland is a large free car park. It’s marked as Parque de estacionamento da Praia de Faro on google maps. From there is a well-maintained boardwalk separate from the road that people can walk and cycle along to get to the beach.

Praia de Faro is a popular beach destination with the population of the nearby city Faro. It’s a more subdued affair that has avoided the mass development of other nearby beaches in the Algarve. Accommodation on Ilha da Faro is small in comparison, limited to a couple of small hotels, hostels and guest houses. To the mainland facing north-east of Ilha de Faro is the Ria Formosa Natural Park. It’s a large protected area made up of saltwater lagoons, mudflats and small channels. This wetland environment is an important feeding ground for migratory birds and marine habitats. During low tide you will see a variety of fishermen wading through these mudflats digging for clams, mussels and other shellfish. They’ll bring the buckets full of them to the shore, you’ll also see nearby restaurant owners buying fresh shellfish directly from them.

Praia de Faro offers all of the usual beach facilities to be expected from a beach resort. Sun beds and parasols are available to hire if you didn’t bring your own. For the more active visitors, there are several surf schools which offer surfing lessons and surfboards for hire. Kayaks and stand-up paddle boards are also available if you want to learn how to use them, or if you want to explore the calmer channels of the Ria Formosa on your own. The large central section of the beach is lifeguarded, so the water is safe for swimming. Although, like many of the Algarve beaches, the water can be surprisingly cold. Despite the Mediterranean weather, the sea water is still Atlantic! Showers and changing rooms are also available near the main car park.

With the beach stretching for nearly 9km, it’s a great place to take a long beach walk. Once you leave the central and populated section, you’ll find the beach much more deserted. Walking towards the east will lead you to one of the Ria Formosa’s tidal inlets. It’s here that water floods in and out of the lagoon system. The landscape here is completely different to what you might have seen before. Consisting of rolling sand dunes, low beaches and turquoise blue water and channels. To walk from the main car park, it’s a 6km return trip. However, if you’re arriving by car you can park at the eastern end of the island and halve the return distance to 3km. Once you leave the populated area, there’s no shade along the way, so it’s recommended to take plenty of water, sun cream and a hat!

Revealed in April 2021 was an impressive scuplture by the talented Portuguese artist Bordolo II. Attached to the water tower on Praia de Faro is a sculpture of seahorse that can be seen as you approach from the mainland. The seahorse now watches over Praia de Faro and the Ria Formosa. Made from plastic waste found in the Ria Formosa, it is both a beautiful and haunting reminder of what is happening to the lagoon, and waters around the world.

Why a seahorse you might be wondering? Well, in 2001, the Ria Formosa was considered as having the greatest population of seahorses in the world. Unfortunately, today the number has dropped by an estimated 90%. A combination of habitat destruction, pollution and of course waste has all contributed to this. There are several projects underway attempting to restore the population of seahorses and to protect their habitat. They’re a symbol of hope, and a start warning sign of whats happening.

You’ll find the sculpture on the water tower within the camp grounds of Parque Campismo Praia Faro. If you want to get up close to the artwork, check the opening times of the camp ground first.

In either direction on Ilha de Faro, you’ll see a selection of bars, cafés and even a few restaurants. These are definitely more casual and it’s unlikely to find fine dining here! Here’s our pick of the best bars and restaurants.

Rrudys Snack Bar – Casual bar offering a wide selection of typical Portuguese snack bar food.  Tostas, omelettes, salads. If you’re here for breakfast then it might be the best place to get a Full English breakfast in Faro!

Wax Restobar – €5 for a tosta, €7 for a burger and fries, more substantial plates of local meat and fish from around €15.

Cais 73 – Famous for the large tostas and rooftop terrace. It’s a casual place popular with local students and surfers! Tosta’s start at around €7.50 but they’re big!

Zi Maria – Might be the finest dining you can find on Praia de Faro. Serves excellent local fish on a incredible beach terrace.

If you’re looking for a wider variety of options, then the nearby city of Faro has plenty of other great restaurants. See the section in our guide to Faro for a quick introduction!

Most events in Faro, usually take place in the city itself. However, there is one huge event that is right next to the beach. The largest gathering of bikers in the world!

Concentração Motard de Faro – Usually held on the last weekend of July. Each year some 30,000 bikers travel from across the world to celebrate all things biker during this event that some people even call ‘Bike Mecca’. Don’t let the outdated website fool you, it’s well organised. Rock concerts, custom bike competitions, tattoo contests, and parades take place on a large site next to the beach. With the huge numbers of people visiting it’s recommended to book accommodation well in advance during these dates. For a long weekend, price for entry is surprisingly cheap. In 2019, it was €45 for a weekend camping ticket. However, for this year, there is a large amount of uncertainty around the event. If it will be postponed or cancelled due to the Corona Virus Pandemic.

Despite being a small sliver of land, you’ll find quite a few places to stay on the peninsular. If you’re a beach lover and you want to step out of your accommodation and straight on to the beach the Praia de Faro is perfect for you. There’s multiple options including smaller hotels, guest houses and several budget friendly hostels too. If you’re looking for more luxury you should probably look for something in the nearby city of Faro as that has a much wider variety of options!

Should you visit Praia de Faro?

If you’re nearby, than Praia de Faro is great for a day at the beach, or to explore the Algarve’s more natural side. With plenty of activities it makes a nice resort that isn’t overly touristy. However, if you’re looking for a wide selection of restaurants and more of a holiday atmosphere then you may want to look at other nearby resorts! Let us know what you think of Praia de Faro in the comments!