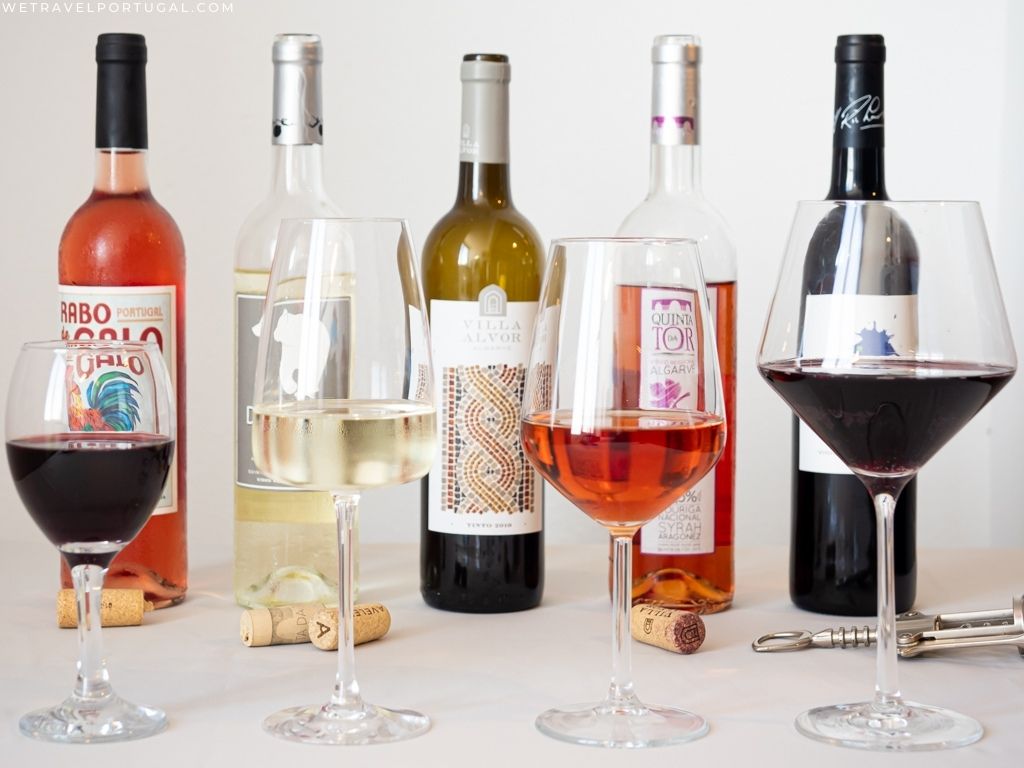 Every year, the southernmost region of Portugal, the Algarve receives thousands of tourists and seasonal residents from all over the globe. Famous for its Atlantic beaches and one of the best climates in Europe, the South is considered one of the biggest and most important tourist regions in Portugal. While tourism accounts for the largest share of Algarve’s economy, particularly during Summer. It’s not all about beach resorts and golf courses. The South is full of history and culture, maintaining close ties with its traditions. Wine production is an example of a many centuries long tradition in the Algarve region. With four wine subregions labelled as D.O.P – Denominação de Origem Protegida (D.O.P), the Algarve has increasingly produced incredible wines appreciated both in the national and international markets.

History of Wine Production in the Algarve

Wine consumption and production in the Algarve region dates from Phoenician and Greek occupancy in the territory. Through the import of Greek wine, they introduced the mythical drink to the region. And later started the cultivation of a native variety of wild grape. It was during the Roman period when the wine production in the South was massively expanded. The same production models used in Italy were implemented in the region which soon began to supply other Roman domains. Evidence of significant wine production during the Roman period can be found in several sights in the Algarve. The former Roman villa in Estói – The Roman Ruins of Milreu for example, is estimated to have produced approximately 20.000 litres of wine per year. With the collapse of the Roman Empire, it’s believed that grape cultivation and consequently wine production reduced considerably. Still, several texts written during the Islamic occupation in Portugal, and archaeological evidence, attest the importance of grapes, raisins, and wine in the region.

By the end of the Middle Ages, grape and wine commerce was re-established as one of the pillars of the Algarve economy. Since then, the industry has faced ups and down until the 1940s when cooperative wineries began to appear in Portugal. In the Algarve, four cooperatives were created. These cooperatives would go on to play an important role in modernising the production of wine in the region and elevating its standards. They also prepared the ground for the Algarve to be recognised in the 1980’s as as Vinho de Indicação Geográfica Protegida (I.G.P) or Protected Geographic Indication. Following this, in the 1990s the demarcation of four wine subregions as D.O.P in the Algarve. The subregions of Lagos, Portimão, Lagoa, and Tavira.

Bathed by the Atlantic Ocean and protected by the mountains in the North, the Algarve has a microclimate corresponding to the Mediterranean. That is, mild rainy winters, hot dry summers, and year-round abundant sunshine. The distinctive climate results in wines generally marked as delicate, and slightly alcoholic. Currently, the Algarve produces four types of wine labelled as I.G.P: red, white, rosé, and a type of fortified wine (licorosa). The most used grape varieties are the local Castelão and Negra Mole for the reds and Arinto and Síria for the whites. Although, international varieties such the famous Syrah have successfully adapted to Algarve terroirs being used by many local wineries.

What is the difference between D.O.P – Denominação de Origem Protegida and I.G.P – Indicação Geográfica Protegida?

For those less familiar with the subject, the designations used to classify Portugal’s wine regions and their products can sometimes be a little confusing. However, they are quite simple to understand, and without realizing, you’ll be looking for them on the labels next time you pick up a bottle of wine.

Regulated by the EU and controlled by the IVV – Instituto da Vinha e do Vinho (Vine and Wine institute), the labels are used to classify specific wines and their ties to a certain region or place due to geographic, natural, or human factors. They attest the legitimacy and quality of the wine which must follow strict requirements regarding its origin and production. Such as the methods used, grape varieties, and organoleptic characters. Assuring the wines remain true to the characteristics that have made them distinctive from the other wines in other regions.

In this article we mention a couple of times D.O.P = Denominação de Origem Protegida or Protected Designation of Origin. Some people might refer to it as D.O.C – Designação de Origem Controlada (Controlled Designation of Origin) or simply D.O – Denominação de Origem (Designation of Origin). It’s the most strict and specific designation of the two, in the Algarve they are the subregions of Lagos, Portimão, Lagoa, and Tavira. For example, for a wine to be a D.O.P Lagos it must not only have originated in the regulated area but be fully produced there too. It also needs to meet specific quality requirements. The I.G.P Indicação Geográfica Protegida (Protected Geographic Indication) is slightly less strict when it comes to location. An I.G.P wine can be produced anywhere within the region is named after. Yet, the product still needs to meet several requirements to receive the tittle. They are also referred to as Vinho Regional – Regional Wine.

The designation D.O.P Lagos comprises parts of Lagos, Aljezur, and Vila do Bispo. Currently, the subregion produces red and white wines. The reds are expected to be velvety and fruit-forward, with low acidity and noticeably high alcohol content. They usually have a ruby colour that can change with time. As for the whites, they are described as delicate, smooth and with an acidic finish typical from warm areas. The colour range can vary from greenish yellow to straw.

Also located in the western Algarve, this is the smallest wine subregion of the Algarve. It encompasses the civil parishes of Portimão, Mexilhoeira Grande, and Alvar. Reds produced in this area are usually velvety and full bodied, keeping the typical fruitiness and low acidity of the Algarve wines. The white DOPs are expected to be delicate and smooth to the palate and to carry a straw hue.

According to Vinhos do Algarve, the entity which regulates wine production in the region. In the past few years, no wine produced in the Portimão region has been labelled as D.O.P. The last label being Tapada da Torre Tinto Reserva 2017 that might still be available for purchase at Villa Alvor’s wine shop.

The wine subregion of Lagoa is in the central Algarve. It comprises the whole counties of Albufeira and Lagoa. It also covers parts of Silves and Loulé. As for the character of D.O.P Lagoa wines, the reds are smooth, fruit forward and with noticeably high alcohol content. Yet, they are easy to drink and pair. Although quite robust and dry, the whites are fruity and easy to drink, expressing great capacity for aging.

The Tavira D.O.P subregion comprises the central and east Algarve, specifically the entire counties of Faro and Olhão, and parts of São Brás, Castro Marim, Tavira, and Vila Real de Santo António. The whites produced in this subregion are complex, aromatic, with light body, and the characteristic acidity of warm areas. The reds are characterised as fruit-forward, medium bodied wines that are low in tannins and easy to drink.

Wineries to Visit in the Algarve Region

If you’re not content with just drinking Algarve’s wines, what about visiting some of its vineyards and wine estates? These can make incredible day trips, or when paired with several estates very own accommodation fantastic longer stays! Drinking wine in the evening, and taking a sun rise stroll through a vineyard? Magical!

Located on the outskirts of Lagos, the single state vineyard specialised in the production of organic wines and offers guided tours and wine tasting. For a little more culture immersion, you can book their accommodation. The rustic guesthouse has stunning views to the valley, vineyards and the mountains.

Located in the former Quinta do Morgado da Torre in Alvor, the estate was recently acquired by Aveleda Group becoming Villa Alvor. Currently, Villa Alvor only produces Regional Algarve wines that can be tried and purchased on the estate. Visits can be booked through their website.

Located in the village of Estômbar, this wine estate combines wine and art to premium accommodation. You can visit the property for free, but they also offer wine tastings, and wine making experiences. This is the estate behind the prized Marquês dos Vales and Dialog brands of Algarve wine.

A guide to Algarve wines can hardly be written without mentioning Adega do Cantor. Keen eyed visitors will have spotted the cardboard cut out of Sir Cliff Richard proudly displaying the bottles of wine from his vineyard at various hotspots in the Algarve. That cardboard cut out was rather famously once stolen from the duty free section of the airport which resulted in a plane being grounded until he was returned by the thief. To the winery itself, tours and tastings can be organised throughout the year for a small fee. However, there is a public cellar which sells the full range of Vida Nova and Onda Nova wines. You’ll also find it’s Vida Nova wine and Onde Nova wine at most major supermarkets in the Algarve, as well as at the airport.

Located at approximately 6km from Loulé or a 10-minute drive, Quinta da Tôr is specialized in the making of Regional Algarve wines. Although wine production in the property dates from the 15th century. The vineyards and winery were modernised in 2011, reaching the mark of 100.000 wines produced per year from 7 grape varieties. You can book wine tastings and visits to the estate through their website.

Our Favourite Regional Wines From the Algarve

Which is your favourite Algarve wine? Is there any wine you think should be included in this guide? Let us know in the comments!