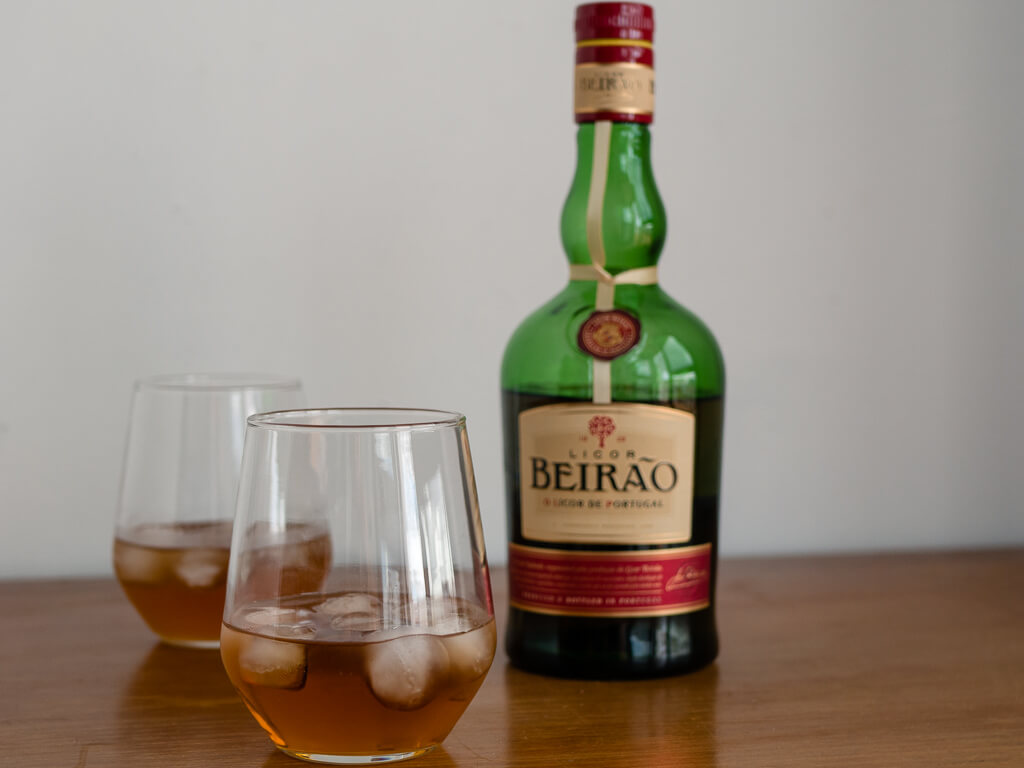 In a country of exceptional wines and ports, something that is often missed off visitors’ drinking lists is Licor Beirão. It might even be a surprise to some that its slogan ‘O licor de Portugal’ claims to be the national liquor. Is this really the national drink of Portugal that not many outside of Portugal have heard of?

What exactly is Licor Beirão? Well, it’s a herbal liqueur flavoured with multiple botanicals, herbs and spices. It’s pretty popular in Portugal where it can be drank neat, in cocktails, in your coffee, and even in recipes for desserts and sweets. The exact recipe is still a family secret, but it’s known to include eucalyptus, cinnamon, rosemary, lavender, aniseed and mint. If you’re thinking it sounds like a lot of other herbal liqueurs than you’re quite right. It has similar origins to the likes of the German Jägermeister, or English Pimms. Sometimes you’ll even hear it referred to as the Portuguese version of those as well.

With an eclectic mix of spices, some home grown and some from much further away you might be wondering what it tastes like. Eucalyptus, cinnamon, rosemary, lavender, aniseed and mint, do these really belong in my drink? The result is an amber coloured aromatic liqueur with a delicate and fairly sweet taste. The similarities to other herbal digestifs are there, but unlike the much more popular and widely known Jägermeister which is 35% ABV, Licor Beirão is 22%. The result is a smoother, sweeter drink, that is possible to enjoy on the rocks. You won’t find people taking shots of Beirão nor mixing it into energy drinks in Portugal. It’s a drink that is enjoyed for its smooth and sweet taste.

History – Alcohol and Liqueur as Medicine

Licor Beirão’s origins go back to the 19th Century, where it was first conceived as a medicine. The use of alcohol to treat various medical conditions has long been practised in Europe. Many of the most famous tonics and elixirs were concoctions from the monasteries of Europe. The age of discovery would bring a big variety of herbs and spices to the medicine cabinets of these so-called pharmacists. The tonics would get more exotic, and the list of ailments they could treat grew longer. Some of the most famous, like the French Chartreuse have their origins in the 17th century when Carthusian monks got their hands on a reported 130 different spices and botanicals and began creating their elixir of long life. Like Beirão the recipe of many of these drinks are still secrets today.

The practice continued for decades until around the turn of the 19th century. When medical advice and scientific methods advanced. The practice of prescribing alcoholic tinctures would fall out of fashion and instead doctors would advise moderation. Laws of the time would soon catch up, and these tonics and herbal liqueurs were forced to stop being sold and advertised for their medicinal purposes. If you’re from England, you’re probably familiar with Pimms. It’s a gin-based herbal liqueur that was originally sold to aid digestion in the 1820s. Similarly, Absinthe, with its infamous reputation of producing wild hallucinations was originally prescribed as a cure for everything from epilepsy, malaria and even parasites.

Unknown to a lot of people, Portugal has its very own version of an originally medicinal tonic. Licor Beirão was originally produced in 1880s, and perhaps earlier to aid stomach conditions.

The story goes that a travelling salesman fell in love with the daughter of a pharmacist in the town of Lousã. This pharmacist was the keeper of the original recipe of a popular local remedy in the town. When the laws came into force banning the practice of alcoholic tinctures. The salesman would take it upon himself to continue to produce the liqueur in a nearby factory. The alcohol would be continually produced in the factory, but it was not until some decades later it would get its name and national recognition. In 1929 the liqueur was entered into a competition at an assembly in Beirão. It was awarded a gold medal and was given the name Licor Beirão after the region. The factory and the brand would be sold in 1940 to the family that still own and produce it to this day.

To say Licor Beirão is an acquired taste is a bit of an understatement. Nonetheless it has been gladly acquired by the population of Portugal. You’ll find a bottle of it in almost every pasteleria, café or bar. You can find Beirão filled chocolates, and even in some ice cream parlours you’ll find homemade Licor Beirão ice cream. Despite its national success, it’s not really that popular abroad, although you will see stands and various gift items sold at the main airports and souvenir shops of Portugal.

With a slick marketing push, the producers of Licor Beirão have been keen to push it towards younger generations. They created two cocktails based on more popular drinks and have advertised swapping the original alcohol base for Beirão. You’ll find these with the accompanying glass at official market stalls in festivals and feiras across Portugal. Of course, you can also make them at home. The quintessential Brazilian caipirinha has been renamed the Caipirão, swapping Cachaça for Beirão in the process. Loaded with ice and lime, it’s a sweet and refreshing drink, that’s less strong than your typical caipirinha. Although one half of the blog (Brazilian) was not impressed, the English half thought it was quite good! The Morangão is a twist of the caipirão. This time swapping the limes for crushed strawberries or strawberry juice, and a dash of lemon juice.

As well the ‘official’ cocktails featuring Beirão, you’ll find a few other popular drinks at bars and cafés. One of the ones we see most often is a combination of limes, ginger ale and Beirão. Or lemon juice, tonic and Beirão. In fact, it seems the Portuguese will often sub in Beirão for almost anything. Including their own version of an Irish coffee, served with a splash of Licor Beirão.

Next time you’re traveling to Portugal, keep an eye for the Licor Beirão chocolates. They make a gift alternative to many of the usual treats from Portugal. Or consider taking a bottle of Beirão instead of port, if you’re family and friends are getting bored with the usual wine and Port gifts!

Do you like to drink Licor Beirao or do you leave it for the locals? Let us know in the comments below!