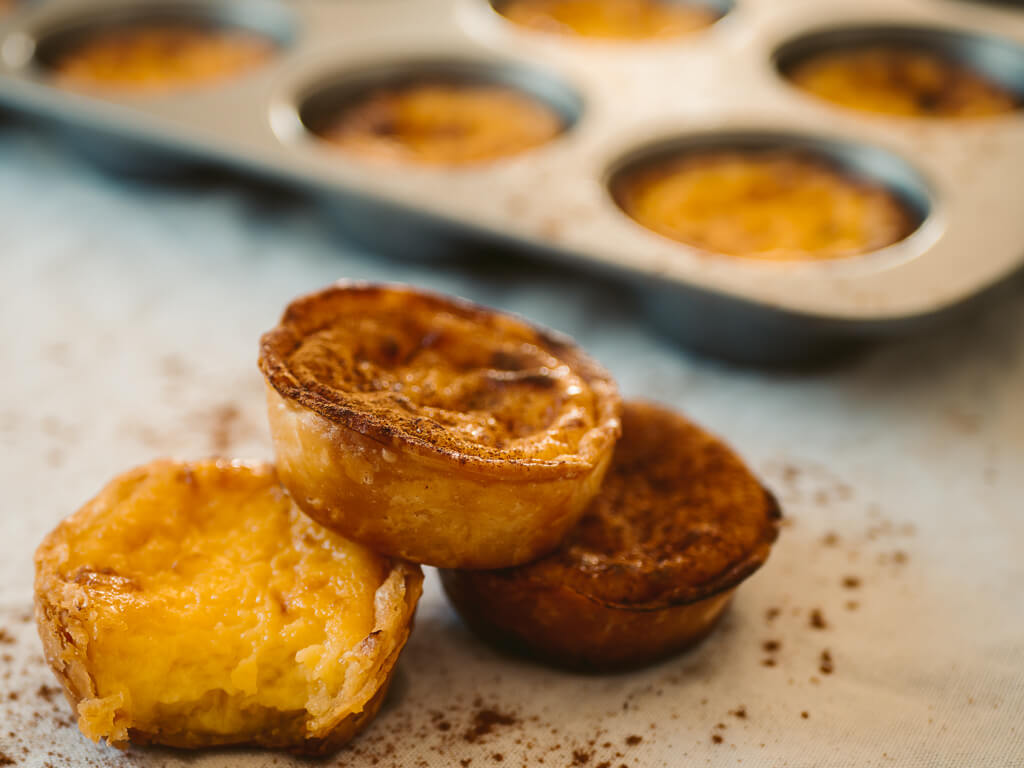 Pastéis de Nata have a special place in our hearts, perhaps because they were the first traditional food we tried in Portugal, or perhaps they’re simply delicious and we’ve eaten so many of them. They are amazing warm with a cup of coffee, or even with a glass of Port as a dessert.

Pastel de Nata is one of the classic and perhaps the most popular Portuguese pastries available. What’s a pastel de nata? You can describe it as Portuguese custard tart, or more formally as a ”Doce Conventual”. Which literally means a sweet that originated from a convent. The list of Doces Conventuals is very long and every region of Portugal has added its own entry to the list. What do the great majority of them have in common? They are made from substantial quantities of egg yolks and sugar. It was in the 15th century after the colonization of Madeira Island that refined sugar began to be popular in Portugal. During the same period, it was common practice at the convents to use egg whites for starching religious clothing. This left large amounts egg yolks left over, not being wasteful these were often made into sweets and pastries.

Although the traditional Doces Conventuais were made all over the country. It was in one particular monastery in Lisbon where the Pastéis de Nata were created. That’s the Hieronymites Monastery or locally known as Mosteiro dos Jeronimos. The Liberal Revolution of 1820 resulted in the extinction of religious orders, and caused the imminent closure of many convents and monasteries. The monks of Jeronimos Monastery began selling their natas at a nearby sugar refinery in order to help ease their financial hardship. Despite their efforts, the monastery still ended up closing in 1834. The recipe of their specialty would then be sold to the owners of the sugar refinery where they previously sold their natas. In 1837, the refinery owners started their own production and sale of the pastries themselves.

These days both the secret ‘original recipe’ and the pastry shop (Pastéis de Belém) are still owned by the descendants of that refinery. That’s why you will come across two different names for the same (or not quite) pastry; Pastel de Nata and Pastel de Belém. The first, refers to the generic version which can be produced and sold by anyone. The second one refers exclusively to the ones made by Pastéis de Belém. In 2011, following the result of a public vote. Pastel de Belem was declared one of Portugal’s Seven Wonders of Gastronomy. Cementing itself as one of the countries national dishes both in Portugal, and abroad.

As we have no intention of keeping our own recipe to ourselves, here it is, our favourite Pastel de Nata Recipe!

For the Puff Pastry:

1. Using your fingers, quickly mix the flour, water and salt in a bowl, until it starts pulling away from the sides of the bowl. You can also use a mixer with a dough hook attached to it. This initial dough should be very similar to a sticky wet bread dough so use a spatula to get it out of the bowl. Transfer the dough to a floured surface, sprinkle some more flour on top of the dough and wrap it in cling film. Set it aside for 15 minutes in order to let any gluten that may have been activated to rest.

2. Once fifteen minutes has passed, it’s time to start the laminating process. So, add more flour to your surface and make sure you have plenty of space to work with your dough. We are going to start rolling our sticky dough, make sure to cover your rolling pin in flour for this. Once we’ve reached an approximate 25cm square, it’s time to create our first layer of butter.

3. Using a light brush, brush off the excessive flour from the dough. With a small spatula spread evenly 1/3 of the butter on to 2/3 of the dough. Leave a 2cm border in order to stop the butter from coming out during the laminating process.

4. Carefully fold the unbuttered third of dough over the middle third. Use a dough scrapper to loosen it if it sticks, again brush off any excessive flour from the dough. Fold the remaining third on top of the rest of the dough.

5. Rotate the dough 90 degrees to the left so the last fold is facing you. Repeat the rolling process to an approximate 25cm square. Once again, spread another 1/3 of the butter on top of 2/3 of the dough even. Repeat the folding process as above.

6. For the final layer, turn the dough 90 degrees to the left and this time roll out the dough to a 30x35cm rectangle. With the shorter side facing you, spread the remaining butter over the entire surface of the dough this time.

7. Using our dough scrapper, lift the edge of the dough and while scraping and brushing the excessive flour, roll the dough very tightly. The result should be a tightly rolled pastry log. Trim the ends and wrap it in cling film and chill it for at least 3 hours or ideally, overnight.

1. In a bowl whisk together the flour and 50ml of milk until smooth.

2. In a small pan, combine the caster sugar, the cinnamon and the water. Bring it to a boil and cook it until it reaches 100C degrees. If you don’t have a thermometer, dip a spoon into your syrup and lift it, a large drop is supposed to form and as if falls it should leave a short thin string behind. Do not stir your solution, as we don´t want any crystallization.

3. Meanwhile, in another pan, bring the remaining milk to a boil. Once boiled, remove it from the heat, add the vanilla and lemon zests and cover it with a lid to infuse for a minute or two. Pour it into the flour and milk mixture.

4. In a thin stream, pour the sugar syrup into our infused milk mixture. Remove the cinnamon stick and stir it until it cools slightly.

5. Add in the egg yolks and whisk, strain the mixture into a jug, cover it and set it aside.

Putting it all together

1. Pre heat your oven to 290 degrees if you can, if not, set to the hottest temperature that your oven reaches.

2. Remove your pastry log from the fridge and with a sharp knife divide it into 12 even slices. Place each slice cut side down in each well of a non-stick 12-cup muffin tin. Let the dough pieces rest for 10 minutes to soften. Here is where you’ll be able to see those buttery layers that we made previously.

3. Place a small cup of water on the side to dip your thumbs in. With wet thumbs, start shaping the dough spirals. Press it against the bottom of the tin and then smooth the dough up to the sides, creating a raised lip above the pan. Be careful as the bottom should not be too thin.

4. Fill each cup ¾ full with the custard. Bake the pastéis until the edges are golden brown, around 15-17 minutes. If your oven has a grill mode, turn it on for the final minutes to achieve the distinctive burnt effect of your typical pasteis de nata.

5. Remove them from the oven and let them cool for a few minutes before serving. Our favourite way of eating them is while they’re still warm and with a sprinkle of cinnamon on top.

Some of these steps are a little complicated, so feel free to ask us some questions in the comments below! We hope you’ve enjoyed making and eating them as much as we do! Another luxurious use for egg yolks in Portugal is a traditional rice pudding, you can find out more here!