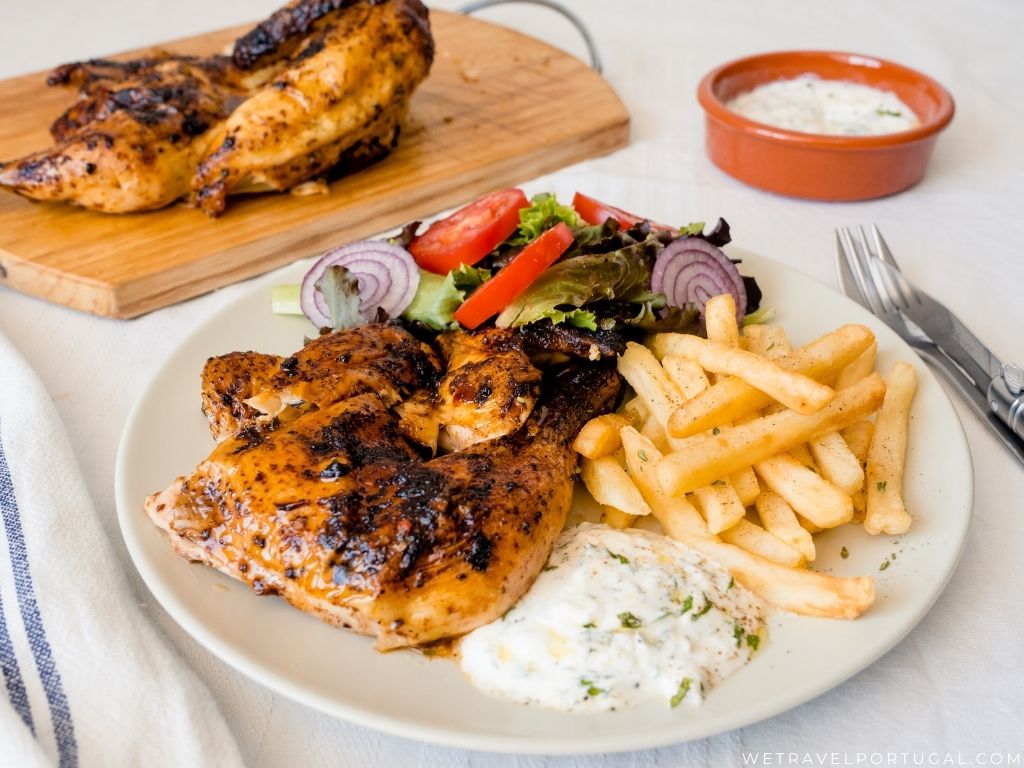 If you ask the locals what dishes not to miss when visiting the Algarve, you will often hear answers involving fresh seafood, dishes like, Monkfish rice, Fish cataplanas and the famous Grilled Sardines. While I totally agree that the Algarve is one of the best places in Portugal for fresh fish and seafood, some of those dishes can be a bit costly, especially when found in the touristy areas. For those travelling on a budget, and for those not that into seafood, Chicken Piri Piri is an equally delicious and traditional Portuguese dish to be tried. The Algarve, is widely known as its home.

Chicken Piri-Piri or Frango Piri-Piri is a popular Portuguese dish. It’s simply a butterflied barbecued chicken served with fries and salad. What distinguishes the piri-piri chicken from other grilled chickens is the chilli glaze it receives before going on the grill – the piri piri. In Portugal, you can find it in many restaurants and churrasqueiras – places dedicated to barbecued food. You can normally choose between an entire chicken or just half of it and order with or without the chilli sauce. Since most places don’t actually serve it very hot, those who like some extra heat can ask for more piri-piri sauce.

The Origins of Piri-Piri

In Portugal, the name Piri-piri is used to describe a chilli variety of the species Capsicum frutescens, the same variety commonly known as malagueta peppers. So, what’s the difference between piri-piri and malagueta? Although some people assume them to be different varieties, both originate from the same plant. The chilis differ in size, maturity stage, and pungency. Piri-piri chilis are usually smaller and can be hotter than malagueta chilis. They measure around 2-3cm in length and are considered very hot, on the scoville scale they can range between 50,000-175,000 Scoville Heat Units (SHU). If you’re not familiar with the Scoville scale, a common pepper like a Jalapeño is around 3,500 to 8,000 SHU. Piri piri peppers are much much hotter.

The species Capsicum frutescens is believed to have originated in Central America when it was discovered by Europeans during the Age of Discovery. It was then taken by Portuguese navigators to Brazil, Africa, and Portugal, countries where piri-piri and malaguetas became very popular. Today there is still considerable debate over where piri piri sauce and its application to chicken actually originates. Most sources point to the Portuguese colonists in either South Africa, Angola, or Mozambique. Those countries and their immigrants are in part responsible for bringing piri piri chicken back to Portugal and especially the Algarve in 1960s and 70s.

Piri piri is the common name for it in Portugal. However, internationally it is much more commonly known as peri peri chicken. Piri piri is believed to have derived from the Swahili Pilipili which means pepper. Portugal and it’s ex-colonies – piri piri. Internationally and in English – peri peri. Perhaps we can also blame the South African chain Nando’s for popularising the peri peri spelling in the UK too!

Frango Piri-piri is traditionally a barbecued chicken, however, with a few tricks and some adaptation, it can be done supremely well in the oven. Resulting in an equally delicious piri piri chicken for a lot less of the work. For this recipe I used a whole butterflied chicken. You can also follow this recipe to cook chicken legs or thighs. If you are using the whole chicken, I suggest you choose a smaller bird, mine was around 1,3kg. For the piri-piri sauce I used both fresh and dry versions of the chilli, if you live in places where piri-piri is not easy to find, bird’s eye chili, cayenne pepper or red habaneros can be good options too. Here in Portugal, you can buy piri piri fresh or dried, powdered version, as sauces and the classic piri piri and olive-oil infusion.

You can also increase the quantities of the piri-piri sauce and store in the fridge for a couple of weeks. It goes incredibly well with almost everything. I also did a bonus cooling sauce which pairs very well with the spicy grilled chicken. This is a practical and delicious recipe for those wanting to (literally) spicy it up their standard roast chicken!

For the Piri-piri sauce:

For the Cooling Sauce:

This spicy chicken goes exceptionally well with a cold Super Bock or Sagres! Let us know in the comments what you think of this classic Portuguese dish!