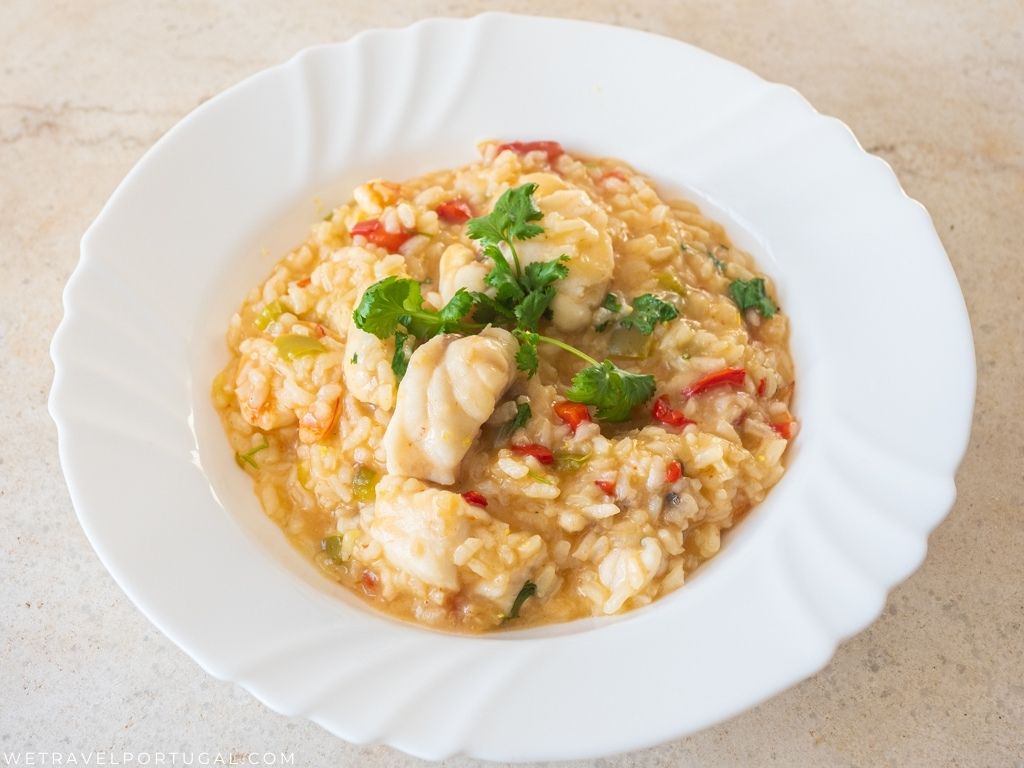 Arroz de Tamboril is another great example of how versatile rice can be – and even more delicious when combined with good fish and some traditional Portuguese flavours. Monkfish rice is widely available in most seafood restaurants across the country, but sadly not the most obvious choice for most people. Tamboril dishes in Portugal can be a bit on the expensive side, the fish is not super popular, nor when buying fresh does it look the most appealing.

About the Fish – Tamboril in Portugal

Monkfish sometimes referred to as Frog fish and, less sympathetically, as sea-devil, are a group of fish of the genus Lophius. They can be found in the Atlantic and Indian Oceans, and in the Mediterranean. In Portuguese, Tamboril is the name given to the species Lophius piscatorius. They are known for their not very charming features, a disproportional flat head, wide mouth and sharp teeth. The true beauty of this fish is hidden inside, tamboril has a firm lobster like sweet and tasty meat. In fact, in some parts of the world, they’re even referred to as ‘poor man’s lobster’. Which can be used in several dishes from stews to pasta sauces, and in Portugal, in a delicious rice dish.

For this recipe we went to our local fish monger and asked for a small monkfish loin. Sometimes, you will have to buy the whole fish, which for this particular recipe is actually a bonus. We used the head and the remaining fish to make an incredible broth to cook the rice. If you are buying just pieces of the fish, you can ask your fish monger for some off cuts, most of them will offer them for free. Making your own fish broth if optional, but highly recommended, it adds more complexity and deliciousness to the dish.

Once more, the rice we are using, is the Portuguese variety Carolino, but you can use any starchy rice of your preference. As for the white wine, make sure to use a good quality one, we believe that the wine used to cook should be as good as the one you will drink with the final dish. That said, let’s get to the recipe – one of the best we discovered recently.

As always, we would love to hear from you! Have you tried our Arroz de Tamboril recipe? Let us know in the comments! We have several recipes using rice, the unique Duck Rice, and the classic Portuguese Rice Pudding!