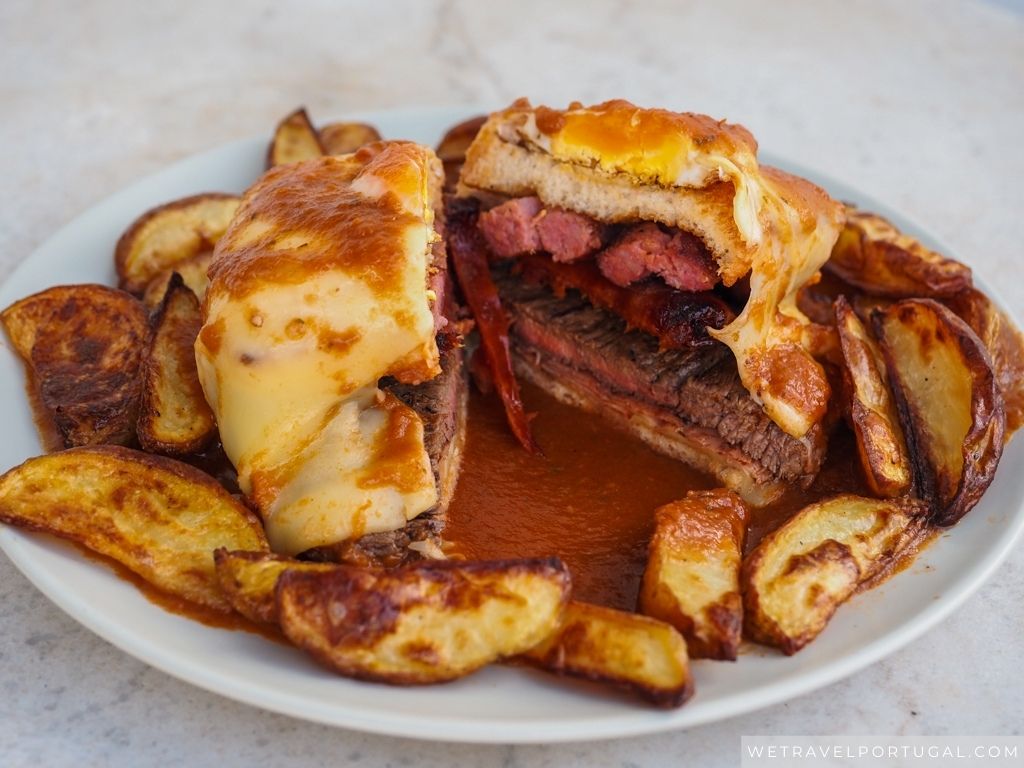 The Francesinha is a Portuguese sandwich that originates from Porto. The literal translation for its name is ‘Little French Girl’, however, the only thing little about it, is the name. It’s a rather large sandwich filled with layers of beef steak, cured meat, fresh sausages, topped with cheese, covered with a beer sauce, and surrounded by French fries. It’s a meat and carb heavy meal that is believed to be a Portuguese adaptation of the French classic, the Croque-Monsieur. Multiple cafés, restaurants, and bars claim the title of having the best francesinha in Porto and it’s a hotly contested title.

Contents show
Francesinha – A Little French Girl?
Are All Francesinha’s the Same?
How to Make a Francesinha at Home?
Ingredients:
Preparation

The original sandwich is currently credited to a man named Daniel da Silva sometime in the early fifties. Silva was a Portuguese emigrant to France, who returned and worked as a cook for the restaurant ‘A Regaleira’ in Porto. It was here he began to serve his homage to the Croque-Monsieur to the locals. It was a hit, and soon many of the cafés and bars in Porto would be recreating the dish and it soon spread across Portugal. That’s one theory anyway. Another is that during the French occupation of Porto in the early 19th century, the locals were introduced to the French habit of eating cheese and meat sandwiches, before making the idea their own and creating the Francesinha. Like many of Portugal’s famous dishes, who the creator is, and figuring out where to find the best version is a heated debate!

Are All Francesinha’s the Same?

Speaking of variations, there are multiple within Porto and outside of it. The most typical include ham, beef steak, cured sausages, and fresh sausages. You’ll find some include bacon, some include higher quality steak that can be served medium or rare, some even include roast pork (assada). If you’re looking for a really unique Francesinha you can even find seafood versions, with shrimp or tuna! The composition is usually similar though, a tall sandwich, layers of meat, topped with cheese, and covered in sauce. Oh, and don’t forget the fries to dip into that sauce!

How to Make a Francesinha at Home?

Despite all of the versions, we’ve tried to stick to a classic recipe, it doesn’t deviate too much from the original idea, in our humble opinion. Feel free to experiment and let us know how it goes! The original always includes a healthy serving of fries, however we prefer to serve ours with roasted potato wedges (it’s one less fried thing on the plate!)

With this you should be able to have your own belly busting Porto experience in your own home. If you’re hungry for more, we have some other recipes for delicious Portuguese sandwiches like the Bifana and the Prego no Pão here. They are a little lighter than a Francesinha though!

Contents show
Francesinha – A Little French Girl?
Are All Francesinha’s the Same?
How to Make a Francesinha at Home?
Ingredients:
Preparation