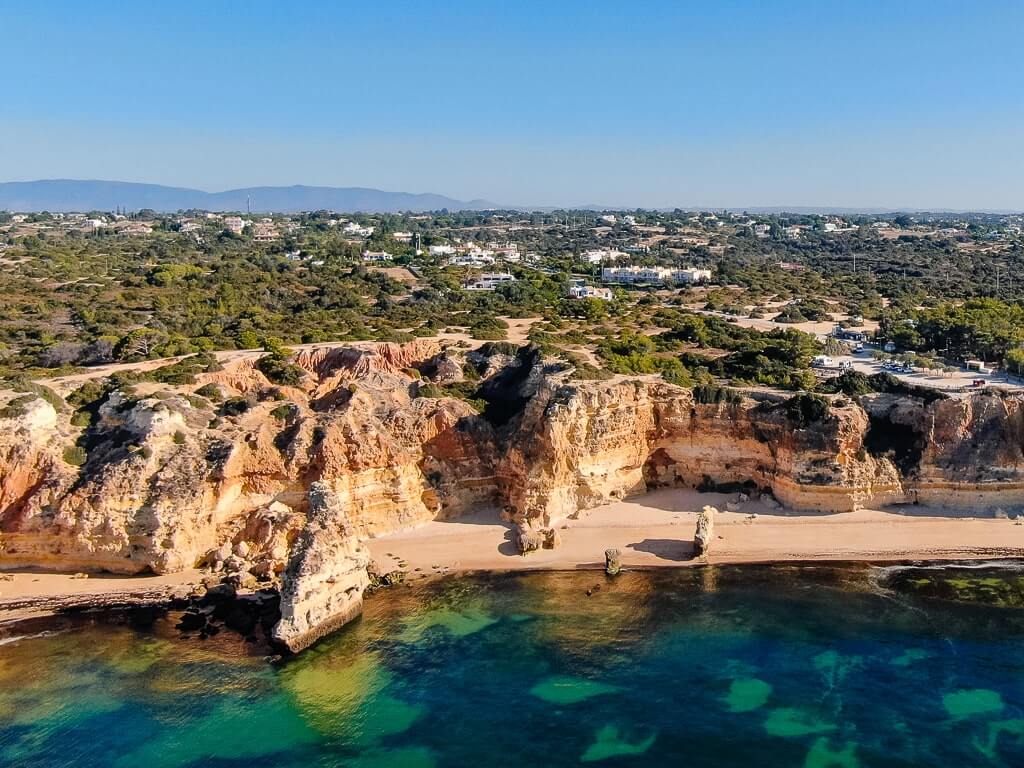 The centre of the Algarve is undoubtedly the most popular and the most widely visited area. Within central Algarve you’ll not only find the big resort towns like Albufeira and Vilamoura, but also historical towns like Silves and Loulé, not to mention the regional capital of the Algarve, Faro. So what exactly is included in Central Algarve? It’s usually described as the central region that encompasses everything east of the Arade River (Portimão) to Faro. Being at the centre of the Algarve, it potentially means it’s the best located for you to explore further, it also has some of the best transport options available. From beaches to lagoons, and small cities to tiny villages it really has something for everyone!

The Places to Visit in the Central Algarve

This is a complete list of the most famous and more typical tourist destinations in the Central Algarve. It does not necessarily suggest the best places, as individual tastes definitely vary. You should of course read guides to the towns below to get a feel for them and if they’re right for you! We’ve linked a few of our own guides, and a few others below!

Albufeira – Albufeira is perhaps the biggest and most famous beach resort in the Algarve. Despite its now infamous reputation, it’s traditional oldtown and home to the famous Albufeira Strip. Although if you want to avoid the worst of tourism and its effects in the Algarve then you may want to skip the ‘Strip’.

Alte – Alte is a Small inland village near Loulé. It has a reputation of being one of the most unspoilt villages in the Algarve. It’s now known for its beautiful fontes (dammed sections of a river) which are a popular family destination on warm days. Don’t forget to visit its nearby waterfall if it’s the right time of year!

Armação de Pêra – It’s a town that much more represents the modern resort than it does the traditional village it once was. Armação de Pêra is known for its impressive 3km stretch of sand and for being more restrained than nearby Albufeira.

Carvoeiro – Carvoeiro is a picturesque fishing town now turned holiday resort. It’s situated right on the beach surrounded by the golden cliffs the Algarve is famous for.

Faro – The regional Capital of the Algarve. Faro keeps a distinctly low-key and traditional Portuguese feel compared to the other big towns in the Algarve. There’s some great smaller museums, traditional architecture, and some unique history and extras.

Guia – Guia is a small town that’s usually lumped in with nearby Albufeira or Armação de Pêra. It’s roughly in the middle of them and located next to one of the main routes crossing the Algarve. It’s famous for being the birth place of Piri Piri chicken and widely regarded as the best place to find the original!

Lagoa – Lagoa is an inland hill town that’s not far from the coast. It’s a more traditional Algarve experience than many resort towns but still has easy access to the best beaches, water parks and largest shopping centres. It’s also a famous wine producing region in the Algarve.

Loulé – Loulé is a bustling market town with a good mixture of culture and local history. It’s famous for its weekly market and for being a step back from the more hectic and coastal Algarve.

Quarteira – Compared to the nearby Vilamoura, Quarteira is often looked over. That said its lower priced alternative than it’s upmarket neighbour. It has some fantastic beaches and some well-priced but very reasonable restaurants. Despite its 2km long promenade lined with bars and restaurants, and backed by high rise hotels and apartment blocks, it still has a more local and traditional feel then nearby Vilamoura.

Silves – The historic Capital of the Algarve and now a unique medieval town famed for its Moorish castle and history. Silves is a popular daytrip destination for people staying on the coast who fancy some culture or nature.

Vilamoura – Vilamoura is the glamorous and upmarket Algarve. The main resort is based around a yacht filled marina surrounded by bars and restaurants. It boasts some of the most expensive and exclusive places in the Algarve but is arguably lacking in traditional and local Portuguese character.

The main regional and only international airport in the Algarve is Faro airport. You just need to consider that Faro airport is around 10 minutes outside of the city, and Faro’s bus and train station are within the city itself. It’s a short ride on a local bus (the no.14 or the no.16). The bus costs €2.35 for single ride and is operated by Proximo. A taxi will cost approximately €10 or it will be a €5-6 uber ride. You’ll need to make this journey to connect to anywhere else by public transport.

Buses and coaches might be some of the best options for public transport in the central Algarve. They service all major towns and cities, and often smaller local buses will run routes between the smaller towns and villages as well. Finding information on the bus times for all of these is often tricky (as often they’re run by the local municipalities themselves). But the main operator is EVA and you can check their services here. EVA also offer an unlimited tourist pass for 3 or 7 days. If you’re planning on lots of journeys or plotting a route across the Algarve, then one of these passes might be a good idea for your trip. A 3-day pass is €30 and a 7-day pass is €38. With a return trip costing between €7-9 the cost adds up quickly if you’re planning on seeing multiple places.

Trains and train stations in the Central Algarve

The major towns of Central Algarve are serviced by train, and even a few of the smaller towns have train stations. Although trains are definitely seen as the scenic and slower route, they are a charming way to discover the Algarve. There’s a few things to consider though. The train stations themselves are often situated on the outside of the towns they serve. Silves, Albufeira and Loulé get an honourable mention. All are over 3km away from the towns the train stations are named after, so factor in a long walk, bus or taxi to get into the towns! So you really need to plan and check the times and stations accordingly.

Car rental is widely available across the whole Algarve, with rental offices at Faro airport and even the major resort towns available. If you want the freedom and flexibility of renting a car then read our guide to car rental in Portugal. As long as you book in advance and watch out for the extra costs car rental can be an affordable option for you.

If there’s a place or a town you think would make a good addition to this guide to central Algarve let us know in the comments!