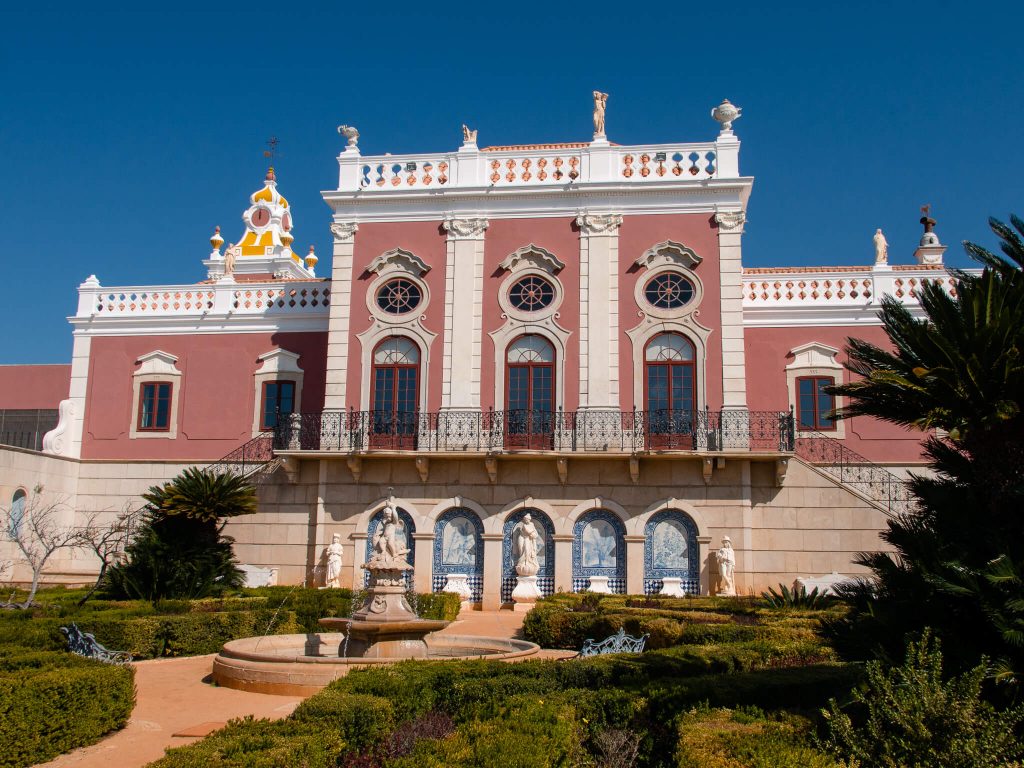 Estoi is a small village located 10km into the hills above Faro. It’s full of typical Algarve charm with a slower pace of life. The village is famous for three things; its palace (Palácio de Estoi), its Roman history, and its 15th Century church (Igreja Matriz de Estoi). With both inexpensive and convenient travel options from Faro, it’s a great village to spend a morning or afternoon in.

How to get to Estoi?

Estoi is located 10km north of Faro and an approximate 20-minute drive. By bus it takes around 25 minutes from Faro’s central bus station. Estoi is the fifth stop on the São Brás de Alportel route that departs from Faro. So, all buses will have São Brás de Alportel as their destination when heading to Estoi, and Faro when making the return journey. Monday to Saturday the first bus is at 07:45, but on Sundays the first bus is at 12:45. For the return journey buses are available all-day Monday to Saturday (the last one departs at 19:05), but on a Sunday the return is only in the evening at 17:45. It costs €3.40 one-way or €6.80 return. These bus times were correct when we wrote this, but we do recommend you check the latest schedule first.

What to see and do in Estoi?

The village is the more typical Algarve mix of small streets, pretty houses and cafés. Its atmosphere is more of a relaxed hill-town than any of the coastal towns in the Algarve so expect a slower pace of life. It’s a pleasant village but most visitors are here to see its main attractions; the Palácio de Estoi, its 15th Century church, and the Roman Villa of Milreu.

The Palácio de Estoi is the main attraction of the village and is a short walk from the village’s main square. If you’re arriving by car you can park outside the palace itself. The Palácio is now a luxury hotel (Pousada de Portugal) but allows access to several rooms, the café and the gardens to visitors for free. The classic statues, fountains, azulejos and of course the stunning views make it very much worth a visit. At the very top of the garden you’ll find a café and a terrace overlooking them. With a simple coffee costing €2.00 and a cappuccino costing €3.00 it might be more expensive compared to the local cafés in the village, but not crazy considering the palace is actually free to enter!

The Palace of Estoi: Brief History

Construction began on the grand palace sometime in the 1840s, but stalled twenty years later when the owner passed away. It would sit incomplete for nearly two decades until the year 1893 when it was bought by a local businessman José Francisco da Silva. Under his guidance and with his fortune, the palace would finally be completed in 1906. It’s believed that his luxurious reconstruction, the expenses incurred, and the attention to neoclassical detail were so high that it gathered the attention of King D. Carlos I. The king was so impressed that he awarded José Francisco da Silva the title of Visconde de Estoi. In 1926, the Visconde de Estoi would pass away leaving the care of his creation to distant family members, which resulted in the palace falling into disrepair.

The palace would then pass from several family members and new owners. Although none of them would succeed in maintaining the palace and its garden as was intended. In 1977, it was classified as a Property of Public Interest. This classification included the entirety of the gardens, fountains and statues. With continued abandonment, the degradation of the palace and its surroundings quickened, and the Municipality of Faro would purchase it in 1987. In May 2009, it was restored and reopened as the luxury hotel we see today!

In the lower palace gardens, you’ll find the stunning blue azulejo staircase and a small orchard. On our two recent visits (Feb 2020) we had two different experiences accessing them. The first visit, we found the gate between the palace and the large gardens below were open. During our second visit, the gate was locked, and a temporary sign was placed saying that the gardens were owned by the municipality of Faro and they had a separate access point further down the road. This access point is about a 5-minute walk, or about 2 minutes from Igreja Matriz de Estoi. Depending on what you find, we do recommend you make the extra effort. The view from the original entrance, the blue azulejo staircase and the pink palace rising above it, is exceptional!

At the centre of the town is the neo-classical Igreja Matriz de Estoi (Church of Estoi). The original church dates from the 15th century but was significantly damaged and then restored following the 1755 earthquake. In the 19th Century it would be further updated in neoclassical style under the guidance of the Italian architect Francisco Xavier Fabri. You’ll find other examples of his nearby, most notably the Arco de Vila in Faro. The church is typical of the region and possibly much grander on the inside than on the outside! It’s rumoured that all of the wood for the alters came from local fishing boats!

Just outside the village (around a ten-minute walk) are the Roman ruins of Milreu. Evidence suggests that the site was originally an agricultural settlement during the 1st century but was converted into a luxury villa during the 2nd and 3rd centuries. The villa and its complex include a large temple, a bathing house and multiple living quarters. A section of the Roman villa was used as the foundations for a more recent 13th century house. Inside it, you’ll find the floors have been excavated allowing you to see the floors of the original building. The site is interesting, but its standout and most photogenic areas are the mosaic ruins depicting an array of marine life.

With its small size and great location a trip to Estoi can be comfortably completed in an afternoon or a long morning, and might be best combined with other local sites or towns. Nearby you have Loule, another town with lots of history and culture. If there’s something you think we’ve missed in our guide to Estoi, get in contact with us or leave a comment below. Thanks for reading!