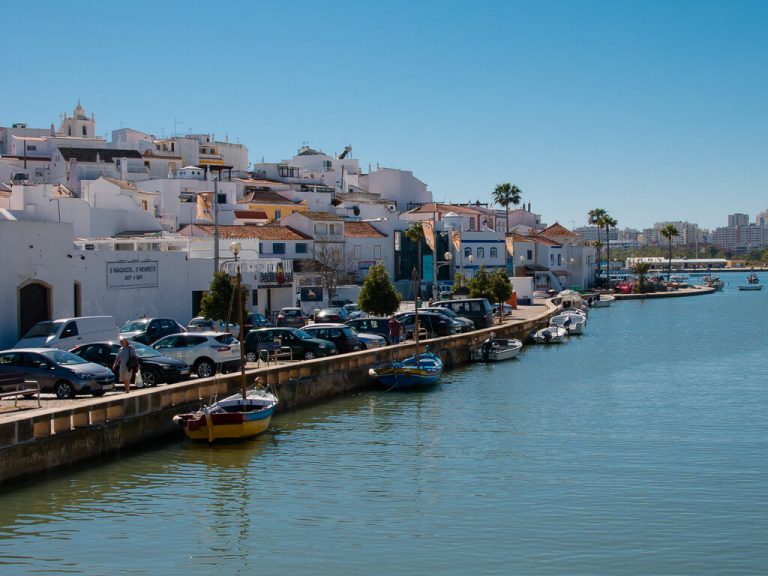 Ferragudo is a small but beautiful village located on the Arade estuary opposite the city of Portimão. Fortunately, Ferragudo has escaped the heavy development of its neighbours and keeps a small but relatively traditional feel. It is well known for its picturesque village, beautiful beaches, it’s small harbour, and of course as a fishing village, fresh fish. It’s also regarded as the last village in the coastal Central Algarve, across the Arade river is the much bigger city of Portimão and the beginning of the West Algarve.

Contents show
How to get to Ferragudo?
What to see and do in Ferragudo?
Ferragudo Church – Igreja da Nossa Senhora and Garden
The Best Beaches in Ferragudo
Praia da Angrinha
Praia Grande
Castelo de São João de Arade
The Ponta do Altar Lighthouse and Headland
Praia do Pintadinho and Praia dos Caneiros
Best Restaurants in Ferragudo
Excursions from Ferragudo
Events in Ferragudo
Should you visit Ferragudo, Portugal?

How to get to Ferragudo?

Many visitors arrive from nearby Portimão for a day trip or a lunch-time visit and it’s possible to catch small ferries or local buses from Portimão itself. Local buses depart Portimão and return almost hourly from 6.45 am-7.40 pm daily. From the wider Algarve, Ferragudo has its own train station that connects it to all of the major stops across the Algarve railway. Although it is an approximate 1.5km walk from the station into the village centre. If trains are inconvenient, then EVA and Frota Azul operate coaches that arrive in Portimão from all over the region. From Portimão you can then weigh up the local options. If you’re driving then there is a selection of large and free car parks to use.

What to see and do in Ferragudo?

Ferragudo with its fisherman’s houses, picturesque church, beautiful beaches and Castel de São João do Arade makes for a pleasant daytrip. Although, lately visitors are spending longer here and there is a small amount of accommodation available to stay in. The small harbour where the ferries dock, is lined with popular fish restaurants and in the water small boats bobbing. Ferragudo’s pretty village centre features palm tree lined gardens, and a small river leading to the main cobbled square of Praça Rainha Dona Leonor. This is a lively square with several cafés and restaurants which makes a great spot to start any visit to Ferragudo. After a refreshment then its best to explore Ferragudo’s narrow and cobbled streets. Along the streets row upon row of colourful houses await and its difficult to choose any particular street to aim for as lots of them look like this!

Above the village and on the top of the hill is Ferragudo’s church – Igreja Nossa Senhora da Conceição. An original church dates to long before 1520. As the records explicitly state that Câmara de Silves requested the church to be renovated in 1520. Unfortunately, that church would be destroyed in the great earthquake of 1755. Following the earthquake, it would be rebuilt to its current specifications and imposing façade. It’s typically Baroque architecture and similar in style to many of the other nearby churches of this time period.

Inside the church is a set of gilded altarpieces in rococo style, a 16th century cruise fragment with a double-sided representation of Our Lady of Christ’s Crucifixion. As well as a 16th-century image of São Sebastião and others from the 17th and 18th centuries. There is also a large collection of ex-votos from sailors and fishermen from the 18th and 19th centuries. The oldest in the collection dates to 1744. Admittedly, one of the main reasons to visit Ferragudo church is the great views it offers from the churchyard and its gardens. A few steps from the church are its nicely sculpted gardens with lots of shaded benches. The views out to sea, across the estuary, and to the city of Portimao are magnificent. The garden is a great place to relax on a bench and soak up some Algarve atmosphere away from the tourists!

The Best Beaches in Ferragudo

Ferragudo has several great beaches within walking distance of the village, and after you’ve seen the sights of the village an afternoon on the beach is a great idea. The main and most popular of the beaches are Praia da Angrinha and Praia Grande. While a more adventurous walk will lead you to the more scenic beaches of Praia do Pintadinho and Praia dos Caneiros.

Praia da Angrinha is the more rugged of the two beaches. It has less of a scenic setting than Praia Grande, but is a great place to see some traditional aspects of life in Ferragudo. It’s the landing and launching place of many of the local fisherman. At the top of the beach you’ll find a row of rather old and homemade sheds. You’ll often see the fisherman themselves fixing nets and preparing their boats here. Although the estuary waters are clean, swimmers will definitely prefer nearby Praia Grande to swim in. Praia da Angrinha also has a large sandy car park that’s free. It’s perhaps the best place to park if you’re visiting on peak days. It’s simple to walk along the beach from Praia da Angrinha to Praia Grande and the walk will take you past Castelo de São João de Arade.

If Praia da Angrinha is the local’s beach, Praia Grande is the bigger, and more commercial tourist beach. As it’s name suggests its big, and it curves away from facing Portimão and faces the sea opening of the estuary. Backed by the typical gold and red cliffs of the Algarve it’s a much more scenic experience. Though the waters are a mix of the estuary and the ocean they are suitable for bathing, while the calm and safe setting makes it popular with families. Along the rear of the beach is a wide selection of beach bars and restaurants catering for all types of budgets. All of the typical beach services can be found here, including lounger and parasol rental. Fancy seeing what Praia Grande looks like now? Well Meo has a live beach cam for you to watch!

In between the two beaches is a small rocky headland and the impressive Castelo de São João do Arade. The idea of a fortress here actually goes back to the early 17th century, and construction began in 1642. The strategic location of this castle meant that from the beginning it was an important part of the defense and control of the Arade river. Initially constructed to defend against pirates and raiders. With the wars with the French and Spanish, and their privateers it grew in military importance. Paired with Fortaleza de Santa Catarina in Praia da Rocha it meant the opening of the Arade was formidably defended and protected from attacks. However, by 1896 it would be abandoned and auctioned for private sale. To this day it is still privately owned and not open for visits. It’s still an imposing feature to see on the coastline though.

The Ponta do Altar Lighthouse and Headland

If you’re feeling adventurous, you can walk right to the top of the headland of the estuary. It’s here you’ll find the lighthouse Farol da Ponte do Altar. It’s a historic lighthouse that was built in the mid-19th century. Although you can’t visit inside. The area offers stunning views of the Algarve coastline. Another intriguing feature are several sinkholes or ‘blowholes’ on the cliff tops. This is where you’ll find out that the sandstone cliffs have chambers that sometimes get worn away, you’ll be able to see and hear the water below from these sinkholes. From Ferragudo, it’s around a 2.5km walk to get there. There’s also a car park if you have your own transport.

Near the lighthouse you’ll find two of the more spectacular and quietest beaches that Ferragudo offers. Praia do Pintadinho to the left, and Praia dos Caneiros to the right. It’s a short but steep walk to either of them from the lighthouse. Parking is also available at Praia dos Caneiros. Praia dos Caneiros is your typically beautiful Algarve beach. A small cove surrounded by sandstone cliffs. Due to its distance from Ferragudo its quite often the quietest beach, but it does have a small beach bar for refreshments. Praia Pintainho is even smaller, but perhaps slightly busier due to the fact its closer to Ferragudo and tourist accommodation.

A Ria – A short walk along the waterside from the main square is A Ria. A Ria is a small restaurant specializing in local Algarvean cuisine and fresh fish. Their specialties include cataplanas and an exceptional monk fish rice.

Borda Do Cais – Great fresh fish right on the harbourside. This is your traditional fish restaurant that specialises in the local catch of the day.

V5 Petiscaria & Bar – If you don’t fancy fresh fish then this petisqueira has you covered. Petiscos, the Portuguese equivalent of tapas here are excellent. With tapas dishes ranging from €3-5 it’s also great value.

Maria do Mar – Forget what we said earlier about having to try fresh fish! Because this is a restaurant that specialises in the tinned variety! Portugal has a long history of canning seafood – it’ll be a topic for another blog post, and this great restaurant is where you should try some. If you’re apprehensive, then start with the tasting plate and be amazed!

Ferragudo is a small village and it is possible to experience it fully within a day trip. If you’re thinking about staying in Ferragudo, then you might want to consider these nearby trips to really enhance your Algarve experience.

Boat trip to Silves – Ferragudo is positioned on the Arade estuary, downstream from the historic Silves. Several tour operators offer scenic boat trips up the Arade river to Silves, usually a return trip with sometime allowed to explore Silves. However, overnight stays can be arranged too. This is a great way to experience the region and the wildlife.

Coastal Boat Tours – As well as the river trip to Silves, several other boat trips leave from Ferragudo to explore the Algarve coastline. The nearby caves of Benagil and dolphin watching tours are perhaps the most famous, these can be organised in Ferragudo or in the harbour of Portimão.

Waterparks – Families and thrillseekers will be pleased to know a selection of the Algarve’s best waterparks are in close proximity to Ferragudo. Aqualand Algarve is 20 minutes by car away, Slide and Splash is 10 minutes away.

Portimão – Across the river is the much larger city of Portimão. Compared to Ferragudo you could even call it cosmopolitan. With a larger variety of attractions, museums, international cuisine and lots of nightlife in Praia da Rocha, you may want to visit Portimão.

Ferragudo Flea Market – On the second Sunday of each month is a lively flea market in Ferragudo. You can expect an eclectic jumble of items spread across many table tops in the main square.

Festa da Nossa Senhora da Conceição – Usually around the 15th of August the small festival of Nossa Senhora da Conceição takes place. During the main event the patron saint of Ferragudo is celebrated and an image of her is carried through the streets to bless the fishing boats in the harbor. In previous years a procession of boats have then sailed between the beaches before returning to the harbor. A small festival continues into the evening, finishing with fireworks!

Should you visit Ferragudo, Portugal?

Ferragudo is perfectly positioned for a daytrip from both the central or the western Algarve. If you’re staying in a more typical Algarve resort, then exploring Ferragudo will let you experience some of the real Algarve. It’s great for a daytrip or even just a day on the beach.