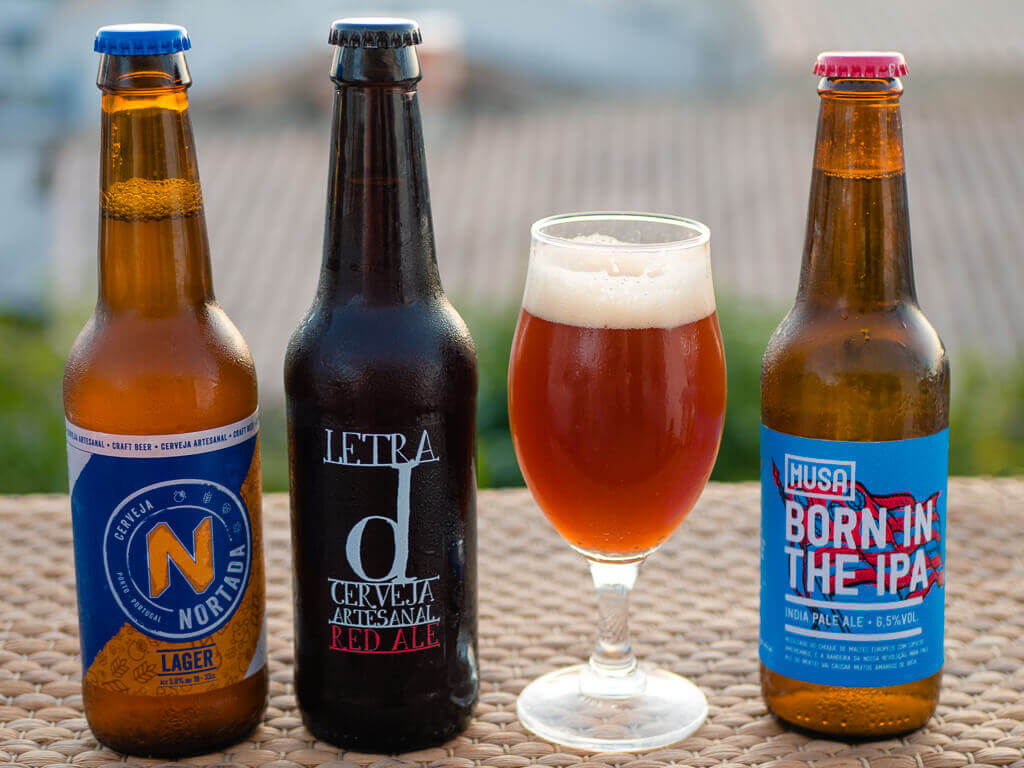 Many people are often disappointed by the selection of beer when they arrive in Portugal. Often because they don’t realise there’s much more to beer here than just Super Bock or Sagres. A surprise to lots of people is just how much Portuguese craft beer is actually available. Unfortunately, you do have to try a little harder to find it. Your average café or bar won’t often stock anything more than those famous national beers. You’ll need to look for specialist pubs, bars, and even some restaurants that want to serve better beer with their food. This is no slight on the national brewers either, we’re big fans of their easy-drinking lagers but if you want your beer with more bite you need to find a local craft brewery in Portugal! Luckily, we’re here with our guide to the craft beers of Portugal to help you find them!

The Craft Beer Guide to Portugal

This isn’t a complete list, and we’re sure there’s a few we’ve missed off. As many towns and cities have smaller breweries that don’t get sold nationally. For now, we’re sticking to the ones that are more easily found or are widely available! Of course as and when, we find new craft beers in Portugal, we’ll add them to this list! Naturally, the bigger cities have a bigger variety of craft brewers, but you can find some outside of the big cities and regions. We’ll break the list down by region, as sometimes it’s easier to find a microbrewery in a particular region you’re planning to visiting!

Cerveja Musa are one of the most popular craft breweries in Lisbon. With brewpubs in both Lisbon and Porto they’re gladly spreading a music inspired beer revolution across Portugal too. Their bottles feature eye-catching designs, and musically inspired names so you’ll definitely notice them.

Beers to try:  Born in the IPA, Red Ze-ppelin and Mick Lager to name a few.

Dois Corvos is Portuguese for two crows! You could argue that Dois Corvos is the American heart of craft beer in Portugal. The co-founders moved to Lisbon from Seattle and felt Lisbon and the beer scene was severely lacking. In 2013, they started Dois Corvos. Today, they are credited with kick starting the craft beer scene in Portugal, and they opened one of the first specialist taprooms. Today their roster of beer numbers over 64 and you can try many of these on draught in their taproom in Lisbon!

Coming in with one of our favourite names is Mean Sardine. Taking inspiration from their hometown and its connection to the sea lots of their beers are nautically themed. They are from Ericeira, a town 50km north of Lisbon. They are keen on leaving the traditional behind and advancing Portuguese beer with sensory experiences based on taste, aroma, and experimentation! If this interests you then you should definitely check out ‘Sun of a beach’ it’s a tropical lager meant for easy drinking in hot weather. Something more exotic is their ‘Ginja Ninja’ a stout flavoured with the typical sour cherries normally used in Ginjinha.

While many of the new brands create lively and colourful personalities to market their beers  Cerveja Letra springs the other way. Letra translates to letter and each style of beer is simply named by a letter: A for a blonde ale, B for Pilsner, C for Stout, D for Red Ale, E for a Belgian Ale, F for a American style IPA, and G for an imperial stout. Letra comes from the north of Portugal. They now have 3 brewpubs where you can sample all of their offerings. One in Braga, one in Vila Verde and one in Porto city centre. Our favourite at the moment is the Letra D their ruby ale!

Cerveja Nortada are a brewery based in Porto, although they’ve now grown into more of a macro-brewery and are 50% owned by the owners of Estrella Galicia. They produce great beers in a range of styles, with one or two specialties a year. Their current popular oddity is a blueberry stout! They operate the largest brewpub in Porto city centre where you can find the full range of beer. As one of the largest macro-brewers, you can find their beers in most supermarkets and larger pubs all over Portugal.

Another Northern based micro-brewery with success across the country is Cerveja Vadia. They were one of the first micro-brewers to really try for something different way back in 2007. You’ll find their brewpub in Oliveira de Azeméis, a small city south of Porto. With a range of 12 different beers, and 2 ciders, their core idea is their beer should be accessible to anyone and not just craft beer enthusiasts! If you’re into pale ales than their American Pale Ale is a personal favourite of ours.

Sovina was another of Portugal’s early craft brewers. They were first involved in the sale of micro-brewery equipment before deciding to create their own beer! They have a simple style, unique bottles and really let the great beers speak for themselves. That’s not to suggest they’re afraid of trying new styles, one of their latest innovations was to brew beer in Port barrels.

Beers to try:  Definitely try their Helles style lager, it’s one of the best.

Algarve Rock are relative newcomers to the craft beer scene only being founded in 2017, but they’ve quickly earned the reputation of producing the best craft beers in the Algarve. While some of the Portuguese micro-breweries pay homage to US craft beer or western Europe’s pilsners, Algarve Rock are open in that they base theirs on English-style beers. They’re not afraid of experimenting either and pioneered the Piri-Piri Pilsner.

Beers to try: Piri-piri Pilsner for a taste sensation, Rock Sharp for a crisp pilsner.

Where to buy and taste craft beers in Portugal?

We’ve mentioned many of the microbreweries brew pubs and taprooms above, but there’s a great deal more that aren’t run by the brewers themselves. Here’s our pick of the best places to try local craft beer in Portugal.

Where to drink craft beer in Lisbon?

Lisbon has the biggest and widest selection of brewpubs and taprooms and many consider it the craft heart of Portugal. Here’s our pick of the best drinking holes and bottle shops you should visit when in Lisbon!

Crafty Corner (Cais do Sodré) – In a converted warehouse in Lisbon’s liveliest district is Crafty Corner. Home to 12 Lisbon craft beers on tap and many more in bottles, they’re proudly Portuguese in what they serve.

Dois Corvos Cervejeira (Marvila) – With a staggering 18 draught beers and many more in bottles, this is the biggest brewpub in Portugal and well worth the effort to get there.

Outro Lado (Alfama) – In Lisbon’s trendiest district is one of the most popular craft beer bars in Lisbon, although perhaps it leans more towards international varieties than locally produced.

The Beer Station (Rossio) – A perfect rest stop for train arrivals and departures massive variety of bottles on offer to drink or take away!

Where to drink craft beer in Porto?

Armazém da Cerveja – With 7 local beers on tap and many more in bottles and cans this is a brilliant and reasonably priced little bar. Tasting flights are available at €5 too! You can also purchase from them online at their website.

Catraio Beer Shop – With a reported 130 varieties of beer for you to try, this bottle shop/bar is a must visit for any beer lovers in Portugal.

Letraria Craft Beer Garden – Brew pub managed by the Letraria brewery in Porto city centre, that sells all of their own varieties and 30 other national and international beers.

Where to drink craft beer in the Algarve?

Although there’s significantly more places in both Lisbon and Porto to taste craft beer in Portugal, you’ve still got a few excellent options in the Algarve.

Algarve Rock Brewery (Faro) – The above-mentioned Algarve Rock operate a small brewery on the outskirts of Faro. They offer tours and tastings in their taproom at the brewery.

Boheme (Faro) – An unpretentious bar in the centre of Faro with a wide selection of craft beer and ales, both international and national.

Grains 864 (Faro) – We’ll refrain from using the term hipster, but this is your typically trendy pub with a massive variety of craft beers on tap and in bottles. To pair with your beer, you’ll find burgers, burritos, hot dogs and even popcorn.

Ol’Bastard’s (Lagos) – A gastropub specialising in fish and chips, and well known for its fish tacos! They have a few craft beers on tap and a wide selection in bottles!

There are several places you can now buy Portuguese craft beers online, as well as from most of the brewers directly themselves.

Dott.pt – Dott is an online platform that connects local sellers to national purchasers, think of them as Portuguese variant of Ebay or Amazon Market. Simply, Dott handle the transaction, while the seller responsible for delivery. You’ll find a wide variety of Portuguese craft brewers selling their beer on the platform like Nortada, Vadia, and Musa.

Elcorte Ingles – A Spanish supermarket chain with a couple of locations in Portugal. A wide variety of Portuguese craft beer with delivery available in continental Portugal.  You’ll find +351, Bolina, Dois Corvos, Letra, Musa, Nortada and Sovina all available to purchase.

Lovecraft – An Aveiro based craft beer company that sell a wide variety of craft beer, with both local and international brands for delivery. Mean Sardine, Letra, Dois Corvos, and Post Scriptum to name a few.

Supermarket websites – Continente, Pingo Doce, and Intermarche offer continental delivery on many of their items, they also stock a wide variety of craft beers from Portugal that you can have delivered with your shopping.

It’s incredibly difficult to stay, and like many things in Portugal, a little decided by what’s available and nearby to you. If you’re in either Lisbon or Porto, you are spoiled for choice when it comes to micro-breweries and craft beer. Outside these regions you’ll need to rely on your local bars, delivery or what the nearest big supermarkets sell! Our tip would be to try as many as you can, as their is so much more beer than your typical Super Bock and Sagres!

Let us know in the comments your favourite beers and if you have anymore suggestions for us to try!