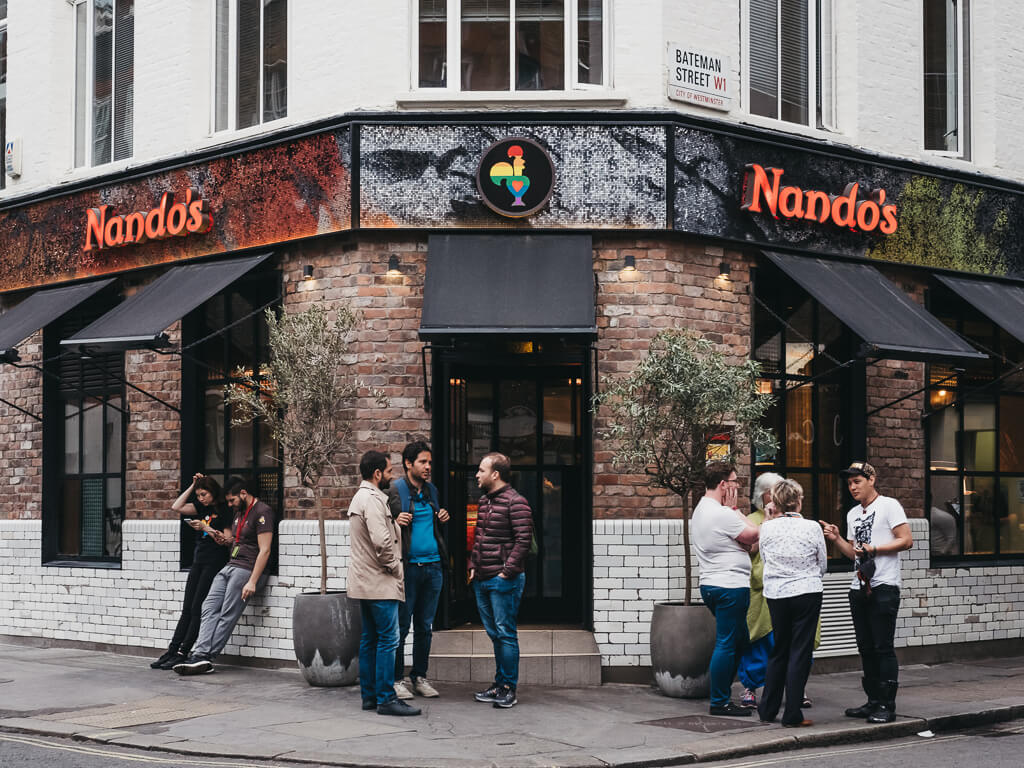 Two questions we’ve been asked a surprising amount of times are “Is Nando’s Portuguese?” and “Can I find a Nando’s in Portugal?”. If you’re reading this from Portugal, you might also be curious as to what Nando’s is and what all the fuss about. First things, first, what is Nando’s and why might people think its Portuguese?

Nando’s is a popular chain of chicken restaurants across the world and especially in the UK. They reportedly have over 1200 restaurants worldwide and more than 422 in the UK alone. You’ll also find a range of their sauces and spices in most UK supermarkets. Their flagship product is peri-peri chicken, which is available in a variety of spice levels, and in a variety of cuts. In the UK they’ve been credited with revolutionising the fast food industry. Bringing real food and a more premium service to the fast food corner. Why the confusion about the origins, and people asking if Nando’s is Portuguese? Well the logo for Nando’s features the famous rooster of Barcelo, and Nando, well that comes from Fernando. Throw in Portuguese symbology, Afro-Luso music, and several Portuguese menu items and you have something that resembles what some people might think is a Portuguese restaurant chain. So lets find out, is Nando’s from Portugal?

Is Nando’s from Portugal?

Where is Nando’s from? The Portuguese Connection

Nando’s originates in South Africa, but one of its owners came from Mozambique, Fernando Duarte. In South Africa, Duarte and his friend Robin Brozin visited a Portuguese style restaurant and tasted the peri-peri chicken. The peri-peri is variety of pepper that came from the Malagueta pepper that originated in South America. In the early 18th century the Portuguese brought it to Mozambique and cultivated it. From Mozambique it spread to the rest of Africa and back to Portugal where its commonly applied to poultry-based dishes. Peri-peri is the international and much more common name for piri-piri, especially in Africa. Duarte and his friend would return and buy the restaurant, naming it after Duarte’s son – Fernando. Nando’s was born and the Portuguese connection was tenuously established.

How Portuguese is Nando’s?

With Nando’s Portuguese connection established, lets try to figure out how Portuguese it really is.

Its logo, named Barci, is of course the Barcelo’s Rooster which comes from a famous Portuguese folktale. The rooster or cockerel is widely considered the unofficial symbol of Portugal and you’ll find it in many places. It was even used as an official tourist mascot for many years. It’s said that the rooster stands for faith, justice, and good fortune and the founders of Nando’s wanted to bestow this on their customers.

The famous folktale? In the 16th century a pilgrim on his way to Santiago de Compostela stopped for a night in the town of Barcelo. Being a stranger in the town, the pilgrim soon found himself convicted of a crime and sentenced to death. The crime in the story varies a lot depending on your sources but is often a large theft or even a murder. Faced with execution, the pilgrim begged to be seen by the judge at the last minute. The pilgrim is brought before the judge who was about to eat a large roasted cockerel. With the fate of a death sentence hanging over the pilgrim, he declared that “if I am innocent, may the cockerel get up and crow”. Like all good folktales, the roasted rooster did get up and crow! The judge amazed at the circumstances allowed the pilgrim to go free. From that day, the cockerel would be the symbol of the town and would symbolise faith, justice, and good fortune. An unlikely tale, but a noble one! Supposedly, the very same pilgrim returned to the town and carved the famous Cross of the Lord of the Cockerel (Cruzeiro do Senhor do Galo), which can still be seen today.

Umm, not really. Although the piri-piri chicken is very popular in Portugal, the comparisons really stop there. Many of the dishes, in fact most of them are relatively unheard of and often impossible to find! Personally, I’ve never seen coleslaw, mash potato, corn on the cob or even roasted vegetables on the menu of your typical churrasqueira that serves piri-piri chicken. In fact, you rarely get to choose your ‘sides’ most just come with a plate of fries and a salad! You also won’t choose which part of the chicken you want, and you won’t find pitta breads, wraps, garlic bread, or even burgers! However, there is one thing on the menu that is definitely Portuguese. A pastel de nata! Reviews are mixed on Nando’s version, but they are definitely Portuguese!

Is there a Nando’s in Portugal?

No there isn’t. Despite the Portuguese connection, symbols and flavours, they’re not currently operating in Portugal! They’re actually also almost unheard of in Portugal and asking for a Nando’s or where a Nando’s is will likely lead to a lot of confusion. They’ve long been rumoured to open but as of 2020 they still haven’t. Don’t worry though, you can still find exceptional and in our opinion much better piri-piri chicken here in Portugal!

Piri-piri chicken which is also widely known as frango assado (grilled chicken) is an exceptionally popular dish. However, forget Nando’s and any expectations that might bring. Piri-piri chicken is a much simpler dish, usually only served with fries and a salad, but plain rice is also quite common. You normally won’t choose how spicy it is, your sides, nor will you choose which part of the chicken you get. If you want it spicier, then you’ll normally been given a delicious piri-piri oil as well. It’s usually a blend of olive oil and dried chilli peppers which give it a deep red colour. This oil will come in a bottle and for most restaurants it’s a homemade blend of spices. So, the heat level is never really standard and it’s up to you to find out. For one person or one serving, you’ll be given half a chicken, and for two you’ll get the whole chicken to share. It’s also usually reasonably priced, our favourite local restaurants serve half a chicken with fries and a salad for €7!

It’s unfortunate that for many people, Nando’s is their introduction to Portuguese cuisine. Nando’s serves good chicken, but to get the best you should really try some of the real piri-piri chicken in Portugal!