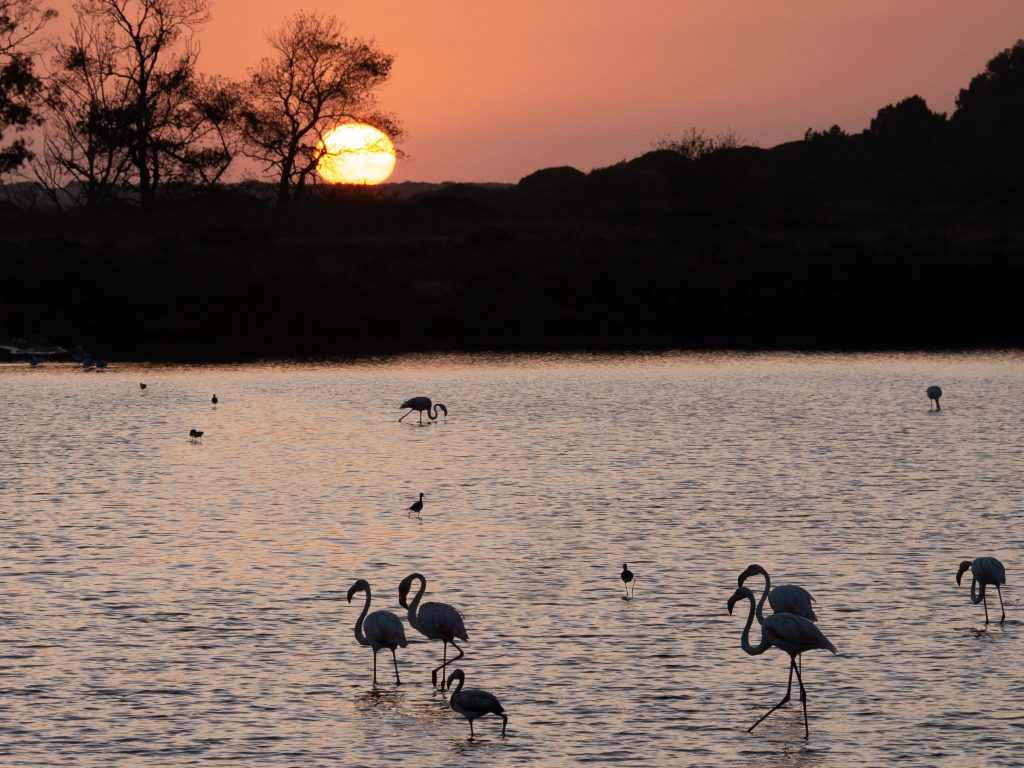 To newcomers to the Algarve it’s often a surprise that you can find Greater Flamingos here. Amazingly though, there’s actually several places you can catch these incredible birds in the wild. Unfortunately for us, they’re not permanent visitors, but they do stop for food and shelter on their way to their nesting sites in France, Spain, Italy and even as far as Turkey. Averaging a height of between 110cm and 150cm they are some of the tallest birds you can easily find in the Algarve. This height makes them great subjects for even modest zoom cameras and knowing where to find them, they’re a great introduction to bird watching and wildlife photography for all ages.

When to Find Greater Flamingos in the Algarve?

In small numbers they can actually be found year-round, but the general advice is the best time to spot them is between November to March. As of, 2021 they’ve actually be documented as nesting in the Castro Marim Natural Reserve. Over 550 juveniles were counted in the colony, and it’s hoped they might become permanent residents. The main picture in this post were taken on the 21st September in Faro, and there were several large flocks so it’s not too difficult to find them outside of the usual November to March time frame, but in some cases there’s an element of luck.

The Natural Habitat of Flamingos in the Algarve

The best place to find them is in many of the Algarve’s lagoons and wetland systems where they can be found foraging in large groups. The greater flamingo forages in mudflats and shallow lagoons with saltwater. Using their feet and distinctive long legs, the flamingo kicks up the mud in the shallow water, then sucks up the muddy soup through its bill. Its bill is heavily specialised, and it uses it to filter out small shrimp, molluscs, seeds, blue-green algae, and other microscopic organisms. You’ll be able to find them foraging in this distinctive method with an upturned head in several locations across the Algarve.

Where to Find Flamingos in the Algarve?

With the Ria Formosa being the most famous and the biggest lagoon in the Algarve, there’s lots of opportunity to find flamingos. Naturally, the biggest towns have the widest selection of tours with Faro, Tavira and Olhão all getting a worthy mention. Many of these tour operators will get you up close to the wildlife and the flamingos with both small and large boats on offer. However, if you’re like us and you prefer a more peaceful walk into nature then we’ve got some great spots for you without the expense and hassle of a boat trip.

Our favourite spot to find flamingos in the Algarve is the Ludo Trail in Faro. It’s a graded hike about 5 minutes from Faro airport. The Ludo Trail is a quick introduction to the Ria Formosa, on one side you have the natural lagoon and on the other the manmade saltpans. It’s in the saltpans and shallow lagoons you’ll find the large flocks of flamingos foraging. The full length of the trail is 7km and it’s possible to cycle along it as well. There’s plenty of parking along the roadside and a nearby bus stop with local buses (The Ludo Stop on the No. 14) to and from Faro. The one negative is the trail is in the direct flight path of Faro airport. It will be noisy when planes take off, the local wildlife doesn’t seem to mind though!

Tavira is another popular flamingo spotting location. On either side of the Gilao River in Tavira are many of the saltpans and mudflats that flamingos can be found in. Quatro Caminhos and the fortress Forte de Santo Antonio de Tavira (although its in ruins) make a nice focal point to walk to with lots of opportunity for flamingo spotting on the way. Those wanting to stray further from Tavira can walk or cycle along the route ‘Ciclovia de Tavira’. It’s a route that will take you along the riverside, through the saltpans and to Cabanas on old roads. It’s another great hike although marketed as a cycle route that might lead you to some flamingos!

Further west than the Ria Formosa you’ll also be able to find flamingos near Alvor in the Quinta da Rocha nature reserve. The hiking trail the ‘Rocha Delicada’ will take you right into the reserve and if you’re lucky up close to some flamingos, if you’re unlucky, you should still be able to spot plenty of other wildlife in this hotspot though! The trail starts at Mexilhoeira Grande train station where you’ll find an information panel detailing the route, but if you’re arriving by car there’s a small car park a little closer. It’s approximately 8km long and should take around 2 and a half hours to complete without stops.

Our final option is in Lagoa within Lagoa de Salgados. It’s a much much smaller lagoon and doesn’t have quite the same scale of the Ria Formosa or Quinta da Rocha but if you’re nearby it’s still a worthy option to spot some flamingos in the Algarve. There’s no long hike either, it’s a 1km long boardwalk along the southern edge of the small lagoon. At its midpoint is a sheltered hide offering great views and a good bird watching location. With a free car park at each end it’s easily accessible for all ages as well. If you’re not up for a long hike in the heat of the summer this might be the best option for you!

Know Before You Go

Now for the more boring but important stuff. All of these areas are wetland areas and as such are home to lots of mosquitoes so a good insect repellent is a must. Even more so during sunrise and sunsets which is often the best time to go bird watching. During the day, a good sun cream and adequate clothing is absolutely necessary, between the bird watching hides there are long stretches of walking without shelter so keeping protected from the sun is important. We recommend long and light clothing, both to protect against the sun and insects. The proximity to water and the coastal breeze has a cooling affect so it’s easy to not realise how hot it actually is so bring lots of water and stay hydrated!

That’s it for our favourite spotting locations but if you’re looking for some fun facts read on!

Flamingos are actually born grey and don’t start turning pink until adulthood. The flamingos get their pink colouring from pigments in the food they eat. These carotenoid pigments are found in the shrimp and algae that make up a large part of their diet. Flamingos that eat a diet of mostly algae are often more deeply coloured than those that eat the small animals that feed off the algae. These algae are also why some of the famous saltpans you’ll find in the Algarve also have hues of pink! Unfortunately, the flamingos you’ll see here in the Algarve won’t be as vibrant as you’ll have seen at zoos or even on TV. This is because those flamingos are often fed a diet that is artificially high in carotenoids. It makes no difference to the birds but gives them the radiant pink colouring you’re familiar with.

Flamingos also have another trick up their sleeve when it comes to their pink colouring. It’s been documented that a gland near the base of their tails secretes an oil laden with those carotenoid pigments. While grooming themselves they secrete and spread this oil on their wings making themselves even pinker! It’s believed that the more colourful birds have better success at finding a mate!

Let us know if you found them at these locations because we’d love to hear from you! Or if you know of other locations to spot wild flamingos in the Algarve let us know as well!

6 thoughts on “Flamingos in the Algarve: The Best Places to Find Them”