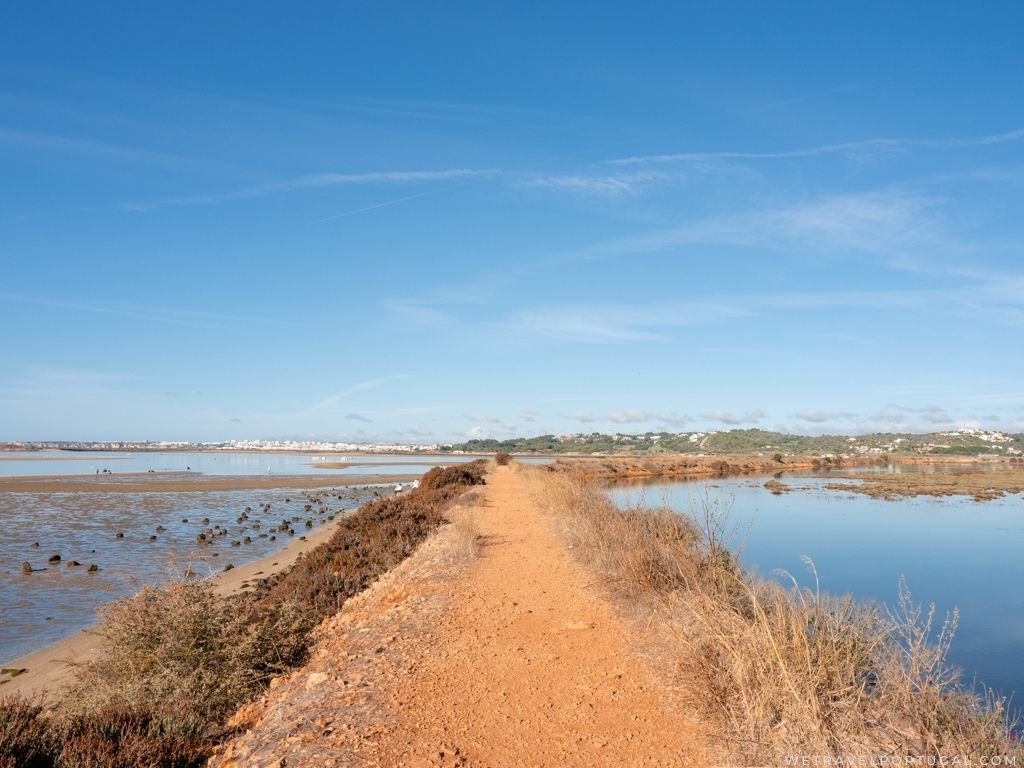 Ria de Alvor is a small estuary located in the west Algarve. It makes for an excellent introduction to the wetland habitats found here in Portugal. There’s no better way to get an insight into this unique ecosystem than taking a walk through it! For that reason the Rocha Delicada Trail is perfect.  It’s a relatively short 7km graded trail alongside a small part of Ria de Alvor. However, you’ll also get to see some local farms, industry and a variety of local fauna and flora. You’ll spend a small part of the trail wondering alongside typical farmland and orchards found in the Algarve. With a variety of traditional Algarve trees growing like carob trees, almond trees, fig trees and olive trees; along with more recent citrus orchards.

How to Find A Rocha Delicada Trail?

The Rocha Delicada is very simple to find and easily accessible by public transport from either of the nearby major towns, Lagos and Portimão. As well as access from the closest town – Alvor – but that is slightly more awkward. The easiest way to get there by public transport is the train station at Mexilhoeira Grande. This is on the east-west Regional Algarve line, and trains continue to Lagos, or Portimão. Alternatively, the No.80 bus operated by Frota Azul travels along the N125 also linking Lagos and Portimão. A bus stop opposite the train station at Mexilhoeira offers easy access to the start of the trail. If you have your own vehicle you can actually park at the most southern point of the trail. Which is great for quick hikes, younger families, or for people who don’t want to commit to the full 7km loop. The road is officially called the Caminho da Rocha and is single track in parts and mostly gravel.

The trail officially starts near the train station, where you’ll find an informational sign and the standard hiking direction markers (they’re red and yellow stripes). Following the signs you’ll walk 3 km south along a road called the Caminho da Rocha through a variety of farmland. This section of the trail will take all the way to the edge of the Ria de Alvor before it splits in two directions. This is also the impromptu carpark and trailhead for the slightly more adventurous section. You’ll find a few fishermen, clam pickers and the occasional camper parked in this car park.

From this area you can head in two directions, east and out into one of the abandoned salt pans. Or north alongside the more brackish waters (a mixture of fresh and salt water) and wetland habitat. If you choose to take the loop east, you’ll still head along the path north afterwards, it’s just a longer loop with a bit more to see.  Heading east is the best experience, and you’ll be able to see the contrasting environments. The tidal Ria de Alvor and the more brackish wetland.

The Wildlife on A Rocha Delicada and Ria de Alvor

This small section of the Ria de Alvor reportedly boasts over 181 species of bird and it’s a small bird watchers paradise. Some of the biggest and most obvious birds to spot are the Greater Flamingo, Grey Heron, Spoonbills, White Storks and Little Egret. Keep an eye out for birds of prey as well, sightings of Eagles, Kites and Ospreys circling overhead are quite common too! On the smaller side of things, look out for the Golden Oriole, Kingfishers and the wonderful Bee-eater. Amongst the trees, and shrub like farmland you may also catch a glimpse of foxes, hedgehogs, and several species of lizard. It’s great place for both experienced naturalists, and new comers to the Algarve’s wildside.

Know Before You Go!

Although the farmland and orchards might trick you into thinking there’s shade along the route there really is very little. So sun cream and a hat is essential during day time hours. So is plenty of water if you plan on completing the full trail during the warmer months. Our favourite time to go is during sunrise or sunset. It’s a great time to spot wildlife and for photography, but it’s also a high point for insects and mosquitoes. A good insect repellent is a must if you plan on visiting during those twilight hours.

If you enjoyed the experience of walking around the ria on the Rocha Delicada trail, you may want to head into the village of the Alvor to experience it in other ways. In Alvor, there are a number of operators who can introduce you to kayaking and paddleboarding in the estuary. Boats can also be chartered for a variety of tours and experiences. Or, if you’re perhaps in need of some rest after a long hike, Praia de Alvor is a pretty nice place to put your feet up for the rest of the afternoon! Likewise, the village itself has a wide variety of bars and restaurants for refreshment too!

A Rocha Delicada Trail in Alvor

The Rocha Delicada is a fantastic introduction to the wildlife of the Algarve. It’s a perfect opportunity to slow things down and experience something a little different to the beaches, resorts, and traditional activities in the Algarve! Have you completed the Rocha Delicada? Let us know in the comments what you think below!