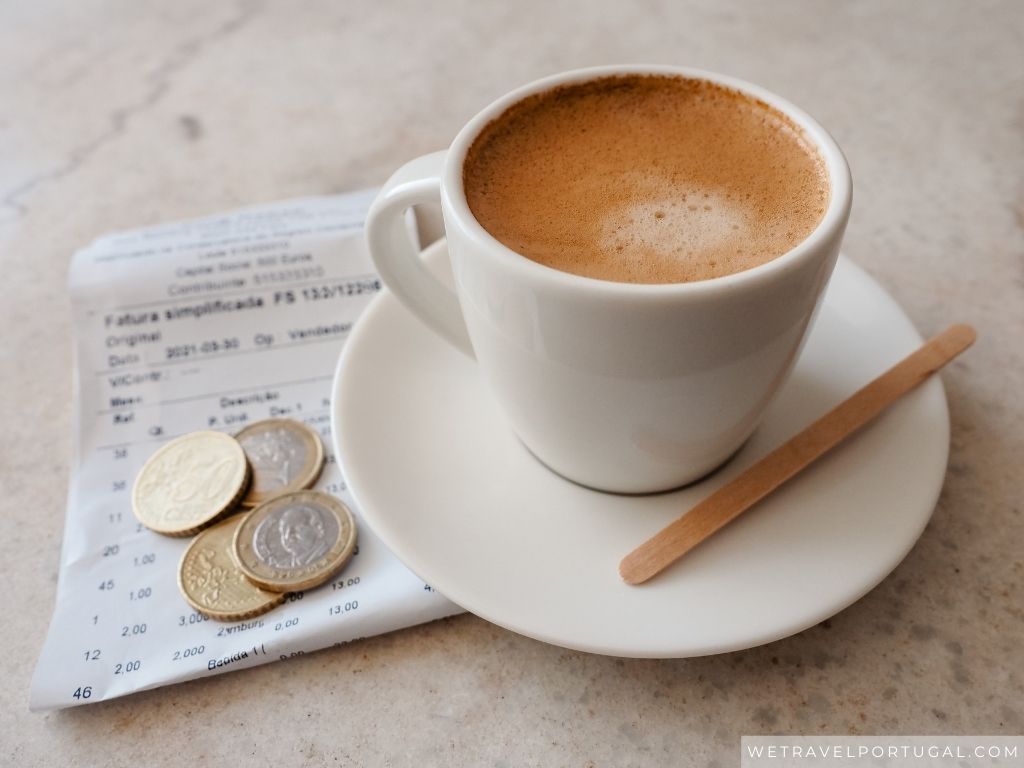 This question probably gets asked weekly and will often spur a heated debate. Why is it such a debate? Well quite simply, the popular areas of Portugal are filled with a mixture of expats, foreign tourists, and local tourists from all over Portugal. Who, understandably, bring and apply their tipping culture with them. This mix of tipping culture, and the tipping culture of the locals gets mixed up into a confusing array of advice and more often than not, a debate.

The worst bit of advice I’ve heard? Perhaps that tipping in Portugal is rude, or disrespectful. That is simply not the case. A tip is always, always, welcome. Nowhere in Portugal will a tip be seen as disrespectful or rude. None of my friends, colleagues, or people that own or manage establishments think this. In fact, if you do own or manage, or work for one, and you do think it’s rude to leave a tip, we’d love to hear from you! Really, we’d love to hear why that is. No one has offered us an answer yet or come forward yet.

Is tipping expected in Portugal?

So, if a tip is welcome, is it expected? In our experience, absolutely not. Very very rarely, have we ever been encouraged from a menu, from a receipt, or even a member of staff to leave a tip. That simply means its not expected, and there shouldn’t be any pressure for you to feel like you have to tip, no matter how good, or bad your experience was.

Do the Portuguese tip?

Coming from our own experience (one half of the blog has worked in a variety of coffee shops and restaurants). The Portuguese tend to tip if they are on holiday, but the locals and regulars of establishments don’t often tip unless it’s a special occasion. It seems to us, the more regular you are to a place, the less you tip. It is very common to not tip for low-cost items, a simple café in the morning, or an imperial during the day. It’s common enough to pay for these in the exact amounts, or to be given small amounts of change. Most local bars and cafés won’t be expecting a tip for single or small orders, they will usually have a jar or tip box for the change should you feel like it.

Should you leave a tip in Portugal?

Not that the minimum wage really matters in this context. More often than not, bar staff, waiters, waitresses, chefs, and cooks, are often paid hourly, in cash and sometimes not even registered. Meaning hourly pay of €3.50 – €4, is exceedingly common. Throw in people working part time, a few hours in the evening, a few hours in the morning, and people taking home less than €20 for a shift is very common. I know this, because I did this, and so did lots of people I worked with across multiple establishments. What does this mean? Well even small tips can make a big difference to the average worker and how much they take home at the end of the week.

We don’t need to mention covid, and the impact of extended closures for the service industry, but a small tip can make a big difference. So yes, if you’re happy, you should tip.

Do we tip when we travel?

Yes, in general we’ll tip either 10% or round up to the nearest €5 or €10 in restaurants. If the nearest €5 or €10 is a bit low we’ll throw in a couple of extra euros. At coffee shops and cafés, for something small like a couple of coffees we often pay the exact amount. For something more substantial or food, we’ll leave a euro or two. It’s that simple.

Should you tip at your local pastelaria in Portugal?

For us, it depends on what you’re eating or drinking. A simple order, like for coffee, a beer or a tosta. Then a tip isn’t expected, you won’t see many people tipping either. If you’re sitting and eating breakfast, or lunch with some table service, a tip would probably be welcome. You’ll quite often find a tip box or jar at the counter, where it’s common but not expected to place your small change.

Should you tip in bars in Portugal?

Bars are a little different in Portugal, often they will also be your café, and pastelaria during the day. Unlike in some cultures, tipping for each order at a bar is not expected. One of my first times I visited a bar in the US I was quite surprised at how it was expected that each time I ordered a beer I was expected to give a dollar or two tip! In Portugal this is not the case, you can if you wish, leave a tip when you settle up if you have a tab. Or if you are paying for each round, leave a small tip when you order your final round. Again, if you’re in a more local bar, you won’t see many locals tipping.

Tourist bars, fancier cocktail bars, that new gastro pub that has just opened and serves popcorn with a local craft beer? Again, tipping won’t be expected for each time you order, but when you pay your final bill, round up, or 10% would be welcome.

Should you tip in a restaurant in Portugal?

In a restaurant, again you normally won’t find a tip (or gratuity) automatically added to your bill. In general, depending on service, a 5-10% is a normal amount to tip. North American friends of ours have tried to give 20-25% tips, and sometimes its returned asking if someone made a mistake! That doesn’t mean you can’t tip large amounts if you feel like it.

Should you tip in Portugal?

The simplest answer is yes. If you can tip, you should. Unlike in many places, tipping is not mandatory, nor will it be interpreted as rude if you don’t tip. But that really doesn’t mean you shouldn’t tip. Unless of course, the service was bad then don’t feel like you should.