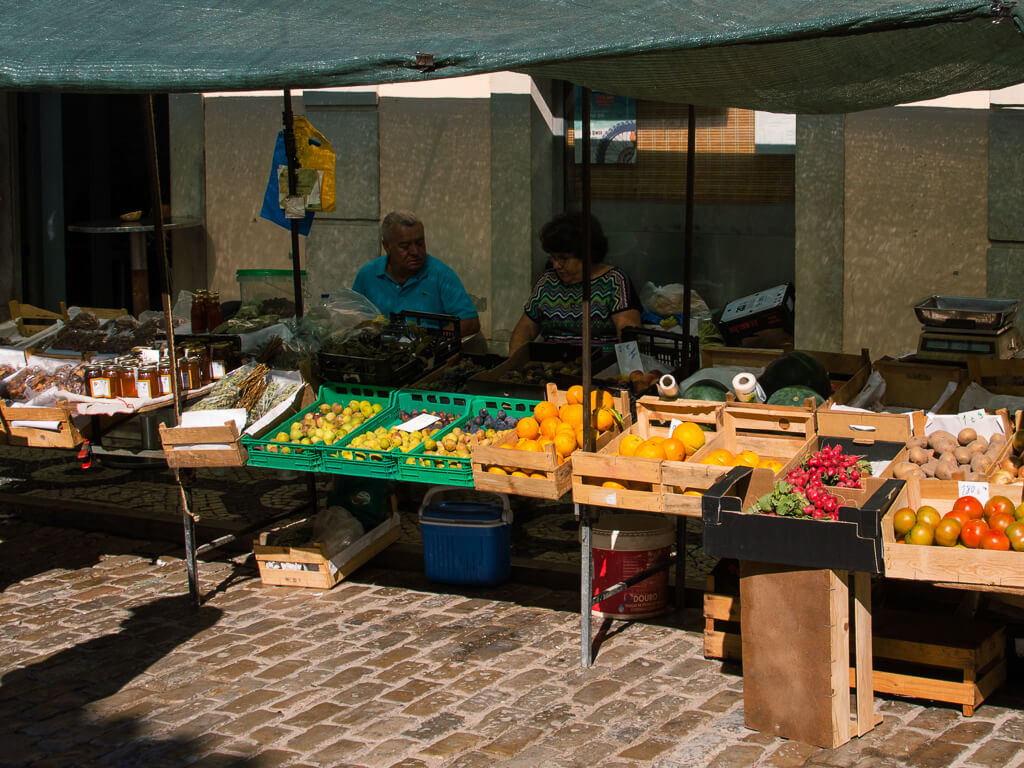 For us, it’s one of the fun things about travelling. Even if it’s just dipping across the border to Spain, we still get excited about visiting a new supermarket and seeing what products are on offer! New brands, new chains, unfamiliar food! So, if you’re looking to explore a Portuguese supermarket for fun, or perhaps trying to decide where to do your grocery shopping, we’ll explain everything about supermarkets in Portugal here!

When travelling in Portugal you’ll see a mix of local brands, and international chains you’re probably familiar with. While you might be familiar with Lidl, you might be less familiar with Continente and Pingo Doce. But, first things first, in Portugal the word for supermarket is simply supermercado. While a typical grocery store is called a mercearia, and you’ll find plenty of both in Portugal. Something that can’t be understated is the existence of small, almost hidden mercearias, frutarias and minimercados in most towns and villages in Portugal. They’ll stock a few of the basics and essentials and are great for when you just need something like eggs, sugar or pasta. They’re not really hidden, but most lack signage and large advertisements. In some cases, it’s easy to walk past them and not notice unless you’re really looking.

What Supermarkets are in Portugal?

From biggest to smallest, here’s a list of the major supermarket chains currently operating in Portugal.

Continente is the biggest and most widespread of the supermarket chains currently operating in Portugal. They have over 700 stores ranging from hypermarkets, to convenience stores. They also have widest delivery network for their online shopping covering the entire mainland.

Minipreço are the second most widespread with a reported 620 stores. However, the majority are smaller convenience type stores. They’re currently owned by the Spanish Dia chain of supermarkets, and many of their home-brand products are Dia.

Pingo Doce is the second largest of the more traditional supermarkets operating around 450 stores. In most of these stores you’ll find the full supermarket experience, with a butcher, fish counter, bakery and deli available.

Lidl is a discount chain of supermarkets from Germany. Less focused on customer service and experience, and more focused on their products and prices. Although they do have bakeries, you won’t find extras like butchers or fish counters here. With over 250 stores in Portugal they’ve been the more aggressive of the German discount retailers.

Intermarché have a smaller number of stores than both Pingo Doce and Continente, but all of their stores are typically large supermarkets with the full range of services.

Spa will be well known to UK visitors and they’re also pretty popular in Portugal with around 130 convenience style stores in Portugal.

Aldi is the second German discount retailer. It follows a similar pattern to Lidl, low prices, small numbers of staff, and cheap brands of products. It offers a no-frills shopping experience and low prices.

Apolonia is the smallest of supermarket chains mentioned here with only three stores. They’re mentioned because they’re pretty popular in the Algarve for offering a more premium shopping experience and a large range of international products.

What Hypermarkets are in Portugal?

In general, most of the supermarkets are very typical and stick to food and general household items. However, in the larger towns and cities you will find a few ‘hypermarkets’. They’ll usually stock everything from toys to garden furniture, as well as the biggest ranges of groceries. These are the closest to a one-stop-shop and are what most people would refer to as a hypermarket. They’re few and far between but the largest are Auchan’s Jumbo stores. They’re dropping the Jumbo brand, but most are still signposted and referred to as Jumbo in Portugal!

Although not in the traditional sense of a hypermarket, you’ll also find Continente has a few hypermarket/shopping centres. Less traditional in that they’ll operate a small shopping centre, with multiple shops. Usually pinned with a large Continente, but supplemented by a Worten (electronics), Sportzone (sports goods), Wells (pharmacy) and Casa (home goods). Instead of a hypermarket where you’ll fill one trolley with items from all sections, you’ll need to visit each shop separately, and checkout separately, but they’re all owned and operated by the group behind Continente.

The Farmers Market (and Fish Market)

In many towns and cities, you will also find the ‘Mercado Municipal’, these are some of our favourite things about Portuguese shopping culture. In bigger towns, the market will be operating daily. While in smaller towns it will be on certain days of the week, usually a Saturday morning for the farmers market. These mercados are typically large open spaces, with multiple vendors selling fresh fruit and vegetables. You’ll also find other local products and Portuguese delicacies.

In lots of cases, you’re buying direct from the local producer. But it’s also a fantastic way of finding local varieties of fruit and vegetables you might not have seen or tried before.  It’s also surprisingly cheap, and prices are usually marked clearly so there’s no need to worry about a language barrier. In many of the coastal towns, you’ll also find incredible fish markets. Particular favourites of ours are in Loulé and Olhão. These operate similarly and are some of the best places to get fresh fish.

What’s the Cheapest Supermarket in Portugal?

Reportedly, Auchan/Jumbo is the cheapest. DECO the consumer body were behind this metric which was announced in 2019. However, as with most of these metrics, it was based on a basket of goods. So, your own results will definitely vary, depending on what items you buy, and if you’re willing to swap brands depending on weekly offers. Something DECO don’t consider is the use of discount cards, where you earn cashback to spend in store the following week, or discounts on your fuel at petrol stations that some supermarkets operate. If you’re diligent these can bring significant savings to your monthly bills.

Most of the major chains of supermarkets in Portugal now operate online shopping, with both delivery and collection options. Although with current Corona measures, many supermarkets have massive delays with delivery days.

Registration and NIFs for Online Shoppers

Unfortunately, many of the supermarkets in Portugal require you to register and enter a NIF (Número de Identificação Fiscal), commonly referred to as a Número Contribuinte if you want an online delivery. A NIF is an individual tax number that any taxpayer in Portugal has. It’s unlikely that tourists, or visitors have one of these numbers unless they’ve previously been a resident, or are a resident. To get around this, some stores like Jumbo/Auchan will allow you to enter a passport number. Similarly, they also require a Portuguese phone number, which again, if you’re not a long-term visitor you probably don’t have. There have been some stories about the difficulties of using an international number. Of the above supermarkets, Pingo Doce and Auchan are the most friendly to visitors and tourists as they don’t require a NIF, or in Auchan’s case allow another ID number to register.

Which Supermarket has the Best Organic/bio Products in Portugal?

Which Portuguese Supermarket has the Best Vegan and Vegetarian options?

All of the supermarkets now have vegan/vegetarian sections and sell specialist products. But in our research, we found Auchan, followed by bigger Continente supermarkets to have the biggest variety.

What about Gluten Free and Fodmap Free Options in Supermarkets?

If you have a specific diet that requires gluten free products, like the Fodmap diet. Then you’ll probably find yourself shopping in multiple places. Auchan do have a large gluten free section in most of their hypermarkets. But you’ll find the basics, like gluten free pasta, flour and bread in most bigger supermarkets.

What Foreign Supermarkets are in Portugal?

What’s the Best Supermarket in Portugal?

Honestly, its pretty difficult to choose a ‘best’ supermarket in Portugal. It’s probably much easier to choose the most convenient supermarket for you. Even at the same supermarket chain, shopping experience varies, and you’ll quickly decide what you do and don’t like! You should give several a go if you can, and don’t forget to check out your local mercarias and farmers market for fresh produce. We usually shop for most of our fruit and veg at our local farmers market, then buy the essentials from whichever supermarket we pass on the way home!

Which supermarkets in Portugal do you prefer to shop at? Let us know in the comments below!

4 thoughts on “The Best Supermarkets in Portugal”