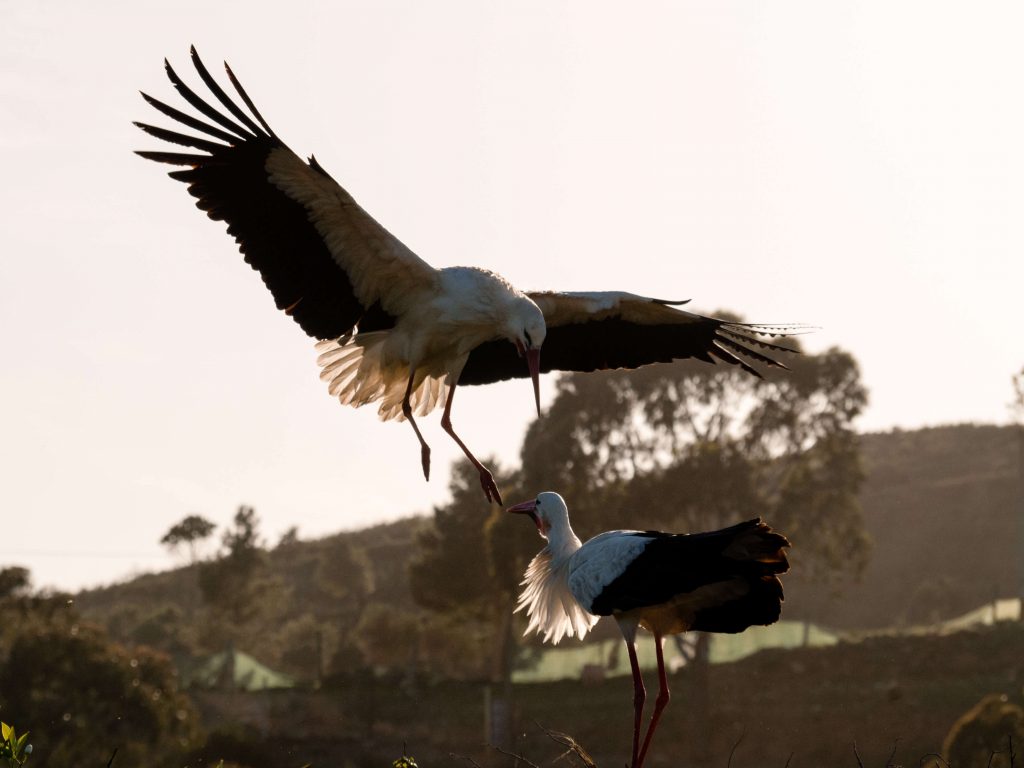 With April approaching you might notice an abundance of storks making a return to the Algarve skies. Although it’s widely recorded that many stay year-round in the Algarve, most storks do leave Portugal during the winter months. They’ll usually return to their nests around late March and April. Not long after this, chicks will be born and if it’s a successful nest, they’ll have up to five chicks to feed. Storks are carnivores and their natural diet consists of everything from insects to small mammals, amphibians and even other birds.

White Storks or Cegonha branca as they’re locally known, are some of the most distinctive and easily recognizable birds in Portugal. Averaging a height of between 80 and 115 cm tall and with a wingspan of up to 215 cm the White Stork is a large and distinctive bird. It is easy to recognize by its large red beak, white and black plumage and long red legs. Unlike many bird species, white storks show very little variation between male and females. The only difference being that females are recorded as being slightly smaller. Once fully grown, it’s also hard to distinguish young from old. Although much younger birds will have a black or grey beak. Storks can live for a maximum of up to thirty-five years in the wild.

Although on the mating calendar its early, seeking out nests in April allows you to watch some interesting and stork specific behaviour. The clattering sound of their beaks, their neck bending displays, but also some gentle pruning and repairing of the nests. It’s fascinating to find a colony and be able to see a mixture of all this behaviour at the same time!

The White Stork usually prefers to build a nest high up with easy access to open farmland, wetland or marshes, where it forages. The nests are typically used successively with the same pair returning to the nest each year. It’s even been documented that a pair of storks will return to rebuild a completely removed nest in the same place. The breeding season of the White Stork starts around the beginning of April and lasts just over a month.

White Storks most often lay between three and five eggs and both parents will share the duty of incubating them. During the first few weeks the young chicks are constantly supervised by one of the parents while the other forages. It can be quite a marvel to see the large and unwieldy nests supporting two adults and five growing chicks!

After two months the chicks will begin to fly but are still fed by their parents. They will continue to be fed for another month or so. Interestingly, at this stage, young storks may switch nests and end up being fed by other nesting parents. It’s unknown why other parents will adopt a chick. But it’s assumed that adopting other chicks incurs little cost to the original chicks or adult storks themselves so the practice continues. In science this practice it’s called alloparenting and it’s rare among bird species.

At around three months old, the young storks become independent. Although independent, they only reach sexual maturity and seek out a mate around three to five years old. Only then will the young storks return to their nesting area to mate. They often return to the same area to build their own nests which results in generational groupings of storks. Often on the same church, building or in some cases the same tree!

That Clattering Noise! Why do Storks Clatter?

The distinctive noise Storks make is referred to as clattering or a clatter. It’s their main form of communication and during displays used as both a greeting and as a response to threats. This mechanical sound is produced by rapidly clapping their beaks together! In general, the storks make this sound as part of a display. It starts with the bird leaning forward with the beak pointed downwards. Then it stretches its neck up and backwards, until it touches its back with the top of its head. Clattering starts when the neck and head are pushed backwards. The display ends by slowly bending the head and neck to the starting point, often while pecking at objects at its feet. This sequence can be repeated multiple times depending on excitement or anxiety. Chicks as young as two days old, also perform bill clattering as a way of greeting a returning parent.

Storks Foraging in the Algarve

The White Storks is a voracious hunter and employs a wide variety of hunting techniques. Many of these can be witnessed in the Algarve. Storks nesting near farmland can often be seen in large groups walking across open fields, they’re effectively pruning the ground for small mammals and insects. Large groups will gather around fields when farmers are ploughing, mowing or harvesting crops. Similarly they’ll also forage in wetland, marshes and lagoon systems in the Algarve. They’ll lie in wait and ambush small fish like the herons. Or repeatedly probe the marshes and mud with their long beak looking for invertebrates. These methods can be witnessed in the Ria Formosa, Ria de Alvor and Lagoa de Salgados. Although I’ve yet to see it, White Storks have been documented hunting aerially. Despite their large size they’ve been witnessed plucking nimble prey like smaller birds and large insects while flying!

Storks in the Algarve– A Conservation Success Story

Storks and their nests are protected in Portugal, under decree law 140/99 of 24 April. This law protects against the disturbance, removal or destruction of nests outside authorised periods. Permission to remove nests must be requested to the Institute for Nature and Forest Conservation (ICNF). Who are responsible for stipulating if, how and when, the nests can be moved. It’s been reported that ICNF will only consider moving nests that pose an “extreme danger to public safety”. If they do, then these nests can only be moved between 1st September and 31st December. It’s because of this law, you’ll see nests built on a wide variety of historic buildings. In some cases, the only part of the building that remains will be the historic chimneys with a stork nest on top.

This strong protection has resulted in the White Stork of Portugal, being one of the few recent success stories that really show the power of conservation. In 1995 it was reported that there were only 1,000 storks in the Algarve. Twenty years later, that number had risen to 14,000. Portugal’s population of storks is notable among the wider population as they are the only birds known to nest among coastal cliffs. It’s believed to be a recent adaption that began on the west coast of the lower Alentejo, but it’s spread south and you can now see them on the western cliffs of the Algarve.

Some of the best places to watch Storks in the Algarve?

Silves is perhaps the most famous town to see them, they appear to have occupied almost every tall chimney and spire possible! From Silves castle, and well any other viewpoint, it’s easy to watch the storks catching thermals and soaring high above the town.  The city of Faro comes a close second, there’s also nests seemingly on every historic rooftop, spire and a rather beloved pair in the centre of the town on a street light. If you’re lucky, you’ll also be able spot them foraging in parts of the Ria Formosa lagoon and salt pans near Faro.

Further west, on the outskirts of Odiáxere on the N125 is a rather large generational grouping in a series of trees. It’s marked as Miradouro Ninhos das Cegonhas on google maps. When we stopped there recently, it wasn’t much more than parking on the side of the road, but does allow viewing of a small colony of storks in the Algarve. For the very adventurous, then trying to spot the rarer storks at their cliff nesting sites might be of interest. The cliffs of Arrifana and the hike to Forteleza da Arrifana in Vicentine Coast Natural Park might be your thing.

Let us know if you’ve seen them at these locations because we’d love to hear from you! Or if you have any other favourite places then let us know and we might add them here!

While researching for this article we came across two very good reviews of stork behaviour. If you have an interest in wildlife and science, then take a read of these!