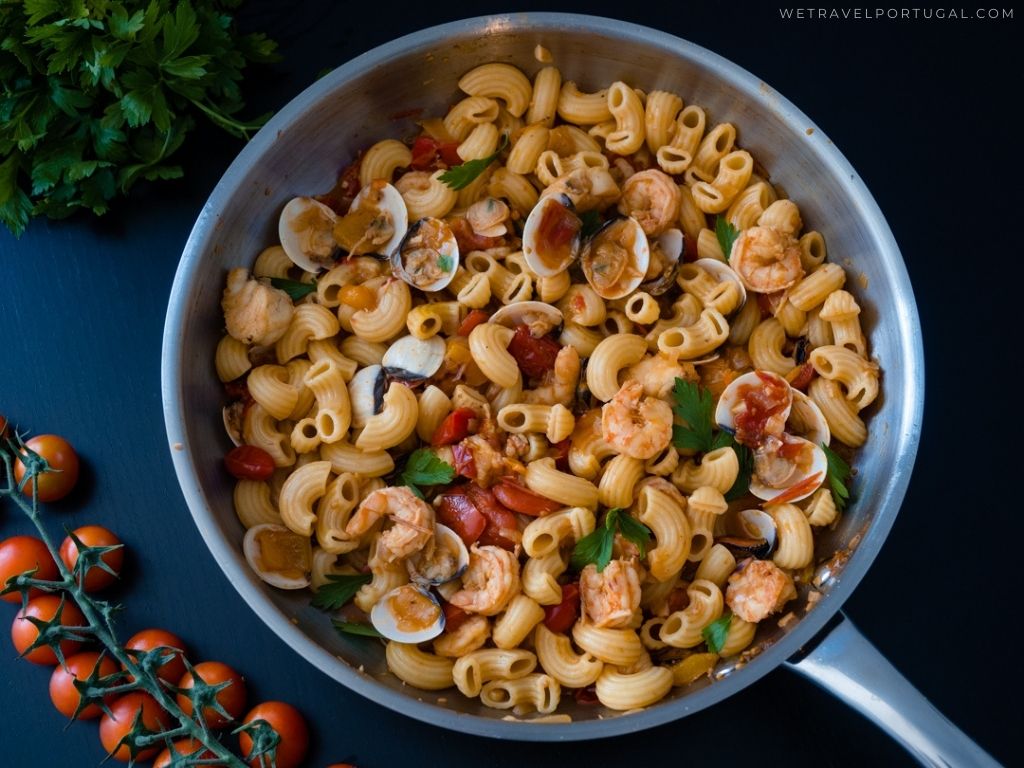 A Portuguese pasta dish might sound a bit odd for some people. In fact, you can count on the fingers of one hand the number of traditional recipes using the beloved Italian invention. Massada de Marisco or Portuguese Seafood Pasta is one of them!

Massada de Marisco is a classic of many seafood restaurants and dinner tables across Portugal, the dish is believed to be a pasta variation of Arroz de Marisco, another popular Portuguese seafood dish made with rice. Traditionally, Massada de Marisco comprises shellfish, tomatoes, peppers, onion, garlic, and short pasta, cooked in plenty of broth, almost resembling a pasta soup. It’s simply delicious, and the perfect dish for those who want to taste some of the variety of shellfish available in Portugal. Of course, it is also a characteristic combination of flavours of the Portuguese cuisine. So, if you love pasta and seafood, this Portuguese Seafood Pasta recipe is for you!

What Seafood to use in our Portuguese Seafood Pasta Recipe?

There’s no hard rule when it comes to what shellfish to use in this recipe. In our opinion, a good Massada de Marisco should include at least some fresh shrimp, mussels, and clams. You can also add squid, lobster, crabs, or any shellfish that matches your taste and budget. Sometimes we will even include some fish loin too. Although some might argue the name should be changed to Massada de Peixe e Marisco – Fish and Seafood Pasta in that case.

Traditionally, the pasta shape used is macaroni, but you can use any short pasta you prefer. A good tip is to favour ridged pasta over smooth, which is better at holding the sauce. For the sauce, it’s important to use very ripe tomatoes as they are softer and juicier. We used cherry tomatoes, but you can use any variety you like. One of the favourite varieties of the Portuguese is the Oxheart. As for the white wine, make sure to use a good quality one, we believe that the wine used to cook should be as good as the one you will drink with the final dish! That said, it’s time to jump to the recipe!

Ingredients For the broth:

If you liked this recipe, perhaps you might like our take on the traditional Seafood Rice, or a more simple Spaghetti with Clams! Let us know in the comments if you enjoyed this!