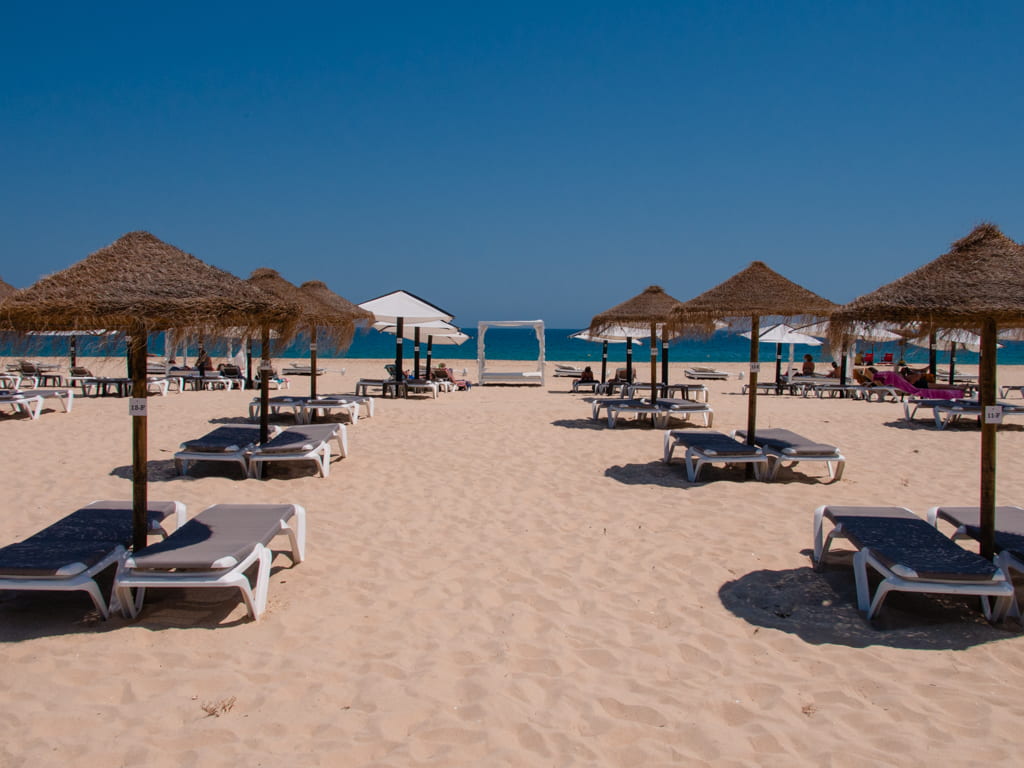 While Tavira might be the cultural heart of the east Algarve, you’ll actually need to travel just a little bit further to get to its nearby paradise island. It’s sometimes referred to as the jewel of the Ria Formosa and its an incredible 11km long island of white sand. With glorious beaches and crystal clear water it is no surprise that this picture-perfect island is often included on lists of the best beaches in the Algarve.

An Introduction to Ilha de Tavira

Ilha da Tavira is an 11km long sand bar island that is part of the Ria Formosa.  The sandbar island essentially protects Tavira and the coast from the Atlantic Ocean. It’s a large part of what made Tavira so successful as a historical town in the past. The island ranges from 150 to 500m wide, and it’s backed by sand dunes, so compared to other beaches in the Algarve it’s a unique environment.  The 11km island has around four named sections.  Praia da Ilha de Tavira, the eastern most beach. Praia da Terra Estreita, it’s central beach. Praia do Baril is in the western half of the island, and finally Praia da Barra da Fuseta the most western tip. In this guide, we’ll cover all four, and which area you should pick when you’re visiting Ilha de Tavira!

After a short ferry ride you’ll arrive at the dock. A quick walk through some woodland will lead you to the glorious beach. You’ll find several cafés and restaurants just off the main path here, as well as public toilets. The beach itself is incredible, and soft white sand awaits you. As well as the cafés, you’ll find a beach bar offering refreshments on the beach. You can also hire all of your usual beach resources, sunbeds, parasols, and windbreaks. With water sports, like kayaks and paddle boards also offered its surprisingly easy to spend a whole day here! The waters are crystal clear, and life guarded druing the summer season. The beach is routinely awarded blue flag status.

Unfortunately, like the rest of the island, accessing it is the biggest issue. You’ll need to check the ferry times, or a private water taxi. Which means it sometimes misses out on the freedom of other beaches in the region.

Next up is Praia da Terra Estreita, its 3km west from Praia da Ilha de Tavira. Access is from the dock in Santa Luzia, by private water taxi, or by walking from Praia da Ilha de Tavira. Here Tavira island is at its thinnest, a clue is in the name. Terra Estreita simply means narrow land. You’ll also hear the beach also referred to as Santa Luiza beach, after the village and ferry dock. From the dock, it’s around a 200m walk along the boardwalk over the dunes to get to the beach.

The beach is stunning, being a smaller village and departure point means that even at the height of the summer season, this beach never feels packed. During that summer season, the beach has lifeguards, and a small bar offering refreshments. You’ll also find sunbed and parasol rental, and a few water sport activities. However, compared to nearby Praia da Ilha da Tavira, there is not the same amount of resources, or options available. You can find a full range of bars, restaurants, and cafés in Santa Luiza. The return ferry from Santa Luiza costs €2.00 for adults and €1.50 for children.

The next beach along Tavira Island is Praia do Baril. The main access point is the resort village of Pedras d’El-Rei. There is no need for ferries here, as there is a large floating bridge across the section of the Ria Formosa. A major bonus for families, or for people with a lot to carry is the postcard worthy toy train that crosses the bridge. For those not wanting to wait for the train, or for days it’s not in operation a footpath is available alongside the track. Taking the footpath and the slower route, really allows you to observe some of the unique habitats of the Ria Formosa below.

Once you’ve made the crossing, you’ll find the white sand Praia do Barril stretches as far as the eye can see in both directions. You’ll find the full beach facilities available, included sun bed, parasol rental and lifeguards. There’s two cafés and public toilets as well. The other thing Praia do Barril is famous for is the ‘Graveyard of Anchors’. A small section of beach with a tribute to the tuna fisherman and community that used to call this area home. Now long gone, all that’s left is an array of anchors laid out as if they’re gravestones.

To access Praia do Barril you’ll need to head to the holiday village of Pedras d’El-Rei to find the start of the bridge. There is plenty of parking available, and regular bus service from Tavira. The tourist train operates on a regular schedule during the summer season.

Praia da Barra da Fuseta is the most western tip of Ilha da Tavira. It’s where the small island feels very remote and is mostly deserted. This tip of the beach is the most remote and rapidly changing section of the island, there’s little vegetation and the island is nearly all white sand. For the adventurous it’s possible to walk from here to Praia da Barril, around 4km. There are no ferries or easy access, you’ll need to walk here, or take a private water taxi. Organised tours, will sometimes drop you off here as well.

How to get to Ilha de Tavira

There are several options to reach Ilha da Tavira, depending on which beach you want to visit.

By ferry from Tavira. The centre of Tavira has a small dock operated by Silnido. In the summer, boats depart almost every hour. The journey takes around 20 minutes and for a return trip costs €2.20. The trip itself is rather scenic, and takes you along the Gilao River and out into the Ria Formosa natural park. You’ll pass Salinas (saltpans), mudflats, and saltmarsh all of it habitat for the local wildlife. Keep an eye for flamingos too!

By ferry from Quatro Águas. Quatro Águas is approximately 2km south of Tavira and is located right on the mouth of the Gilao River. The same ferry that departs the centre of Tavira, will make a stop here in Quatro Águas if it’s not completely full. The benefit of using Quatro Águas as your departure point is the large amount of free parking, which means if you’re coming from further away, you don’t need to stop or try to find somewhere to park in Tavira. The journey takes around 10 minutes from this point, and costs €1.70 for a return trip.

Important: Ferries depart year-round from Quatro Águas, but Tavira departures are only during the summer.

By private water taxi. From both locations you will be able to hire private water taxis to take you to Praia da Ilha da Tavira. A one-way trip should cost around €20, you’ll have the benefit of a private boat, and a departure time at your choosing, but you’ll have to pay for the convenience. If you miss the return journey by ferry, you can easily take a water taxi back!

Santa Luiza. Santa Luiza is a small fishing village turned resort town west of Tavira. You’ll find lots of parking, and during the summer regular ferry service from the dock to Praia da Terra Estreita. The ferry costs €2.00 for a return trip.

Pedras d’el Rei. Pedras d’el Rei is a small resort slightly further west of Santa Luzia. There is plenty of parking, both officially, and unofficially at the roadside. It is here that you can walk across a footbridge to Tavira Island, or you can take the tourist train along the same path. Both routes lead to Praia da Baril, the central part of Ilha da Tavira. You can spend your day at this idyllic section of the beach or walk east towards Praia da Ilha da Tavira.

Fuseta. The final and perhaps most remote option actually departs Fuseta. For the true paradise and remote island feeling, you may want to visit Praia da Barra da Fuseta. Don’t mistake its name or its proximity to Fuseta. It’s still the most western tip of Ilha da Tavira as the island stretches 11km from Tavira to the Fuseta inlet.

Can you Stay on Ilha de Tavira?

Unfortunately, the only accommodation available on Ilha de Tavira is a small campsite that is open each summer season. If you’re looking for something more traditional, then your closest options are in Tavira, Santa Luzia, or Fuseta. Your accommodation will most likely also dictate which area of the island you’re visiting too, as the cheapest ferries, or shortest walks will take you to each area of the island.

Are there Nude Beaches on Ilha de Tavira?

Which Beach Should You Visit on Ilha de Tavira?

For families, it’s easy to suggest Praia da Ilha de Tavira or Praia do Baril. Both of these beaches offer the most facilities and are the most family friendly. If you’re looking for something a little more remote, then consider the other options, they are truly beautiful, but aren’t without their inconveniences. You will not find any services on Praia da Barra da Fuseta but you will find your own paradise island. You’ll need to carry your own refreshments and pay to get there. Compared to other beaches in the Algarve, the island beaches are some of the best, and rarely feel over crowded. With Ilha de Tavira, you really are getting four beaches for the price of one!

What’s your favourite beach in the Algarve? Let us know in the comments!