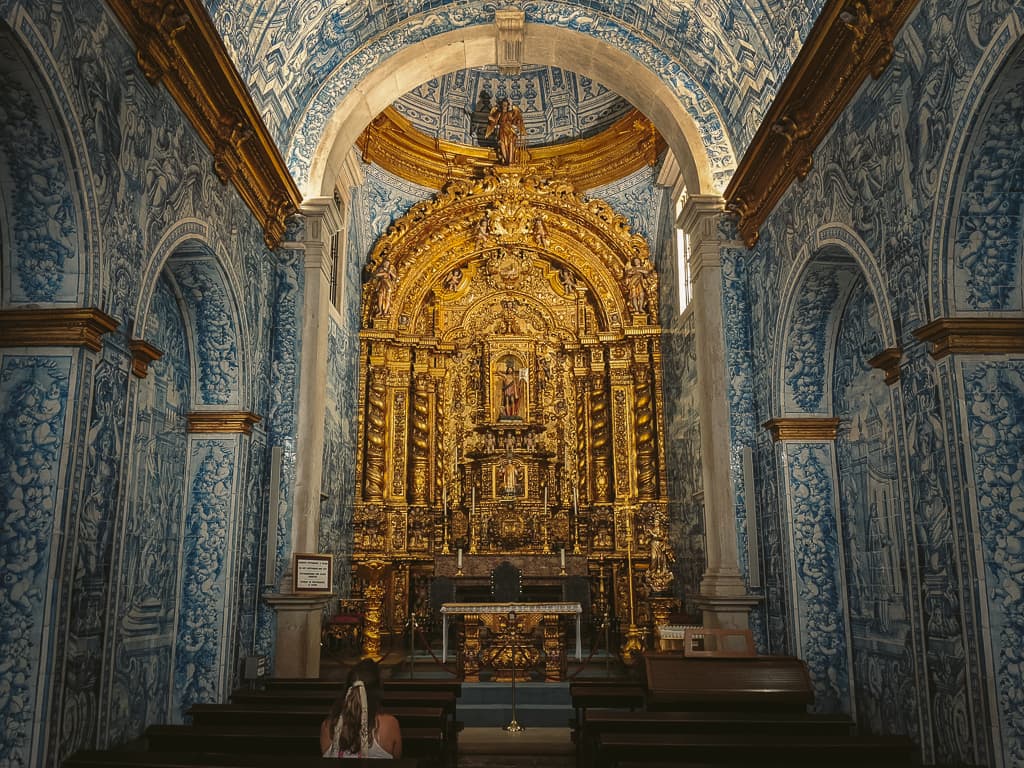 Contents show
The History of Igreja de São Lourenço
Who was Saint Lawrence?
The Azulejo Depiction of São Lourenço
Know before you go!

The local legend states that in the early 1700s the original Igreja de São Lourenço was in a near ruinous state and didn’t even have doors. During a particularly hot summer, and with water levels low. The local people needed to dig a new well in the town. The situation was dire and while digging they prayed for water and made a promise that if they found it, they would give the local town and Saint Lawrence the patronage they deserved. With the completion of the well, the people found copious amounts of water. Enough for the whole town and their crops. It was then time to restore the ruined church.

With the structure and walls already built but in ruins, they decided to rebuild the former church. The churches smaller architectural value would be compensated by exuberant craftsmanship and ornamentation on the inside. Which when you visit is very clear to see. The azulejo tiles have been attributed to the master craftsmen Policarpo de Oliveira Bernardes. One of the most famous tile painters of the era. You’ll find other examples of his work across the country, most famously in the Misericórdia Church in Viana do Castelo and Evora’s Chapel of Nossa Senhora da Cabeça. Amazingly, and unlike many other buildings in the region. The great earthquake of 1755 was ‘hardly felt’, it’s recorded as knocking just five tiles from the ceiling of the church. A testament to the master craftsmen, and the holy Saint Lawrence watching over the church.

Who was Saint Lawrence?

You might have heard of Saint Lawrence, that’s São Lourenço in Portuguese, or even San Lorenzo (Italian and Spanish), but are you familiar with the story surrounding his sainthood?

At the beginning of August 258, São Lourenço was the first of seven deacons in Rome. The Roman Emperor, Valerian, issued a decree that all Christian bishops, priests, and deacons should immediately be put to death. The Pope was captured and executed swiftly. After the death of the Pope, Lourenço was ordered to turn himself in with the riches and wealth of the church. Lourenço quickly distributed the wealth of the church among the poor, the crippled, and the indigent. He then turned himself in. When questioned by the emperor’s right hand on the whereabouts of the wealth he would answer ‘these people are the true wealth of the church’. He further hammered his point by declaring that ‘the Church is truly rich, far richer than the emperor’. With that, Lourenço would suffer a martyr’s death.

The emperor’s right hand was so angry that he prepared a gridiron and placed hot coals underneath it. Lourenço was placed on top of the gridiron and would suffer a slow and torturous death. Not to be outdone or silenced, Lourenço would have one final quip. The legend states he shouted, ‘I’m well done on this side, please turn me over!’ From his quick wit and reference to being cooked on both sides. São Lourenço, Saint Lawrence, or San Lorenzo would become the patron saint of both chefs and comedians as well as many others.

The Azulejo Depiction of São Lourenço

In each arch of the nave of the church are six panels. These six panels depict in chronological order the life and sainthood of São Lourenço as well as Latin descriptions of the above story. The six panels describe the story as follows:

The azulejos need to be seen to really be appreciated. They are remarkable and that’s before mentioning the elaborately decorated gold-leaf altar. The church is on the outskirts of Almancil, so it’s usually pretty quiet, often you’ll be alone. It’s a unique piece of Portuguese architecture and history and should be a stopping point for anyone visiting the area!

You’ll find the church on Rua da Igreja on the outskirts Almancil. If you’re using a GPS the postcode is 8135-027. It costs €3 to enter. In the high season (April 15 to October 15), its open Monday from 3 pm to 6 pm, and Tuesday to Saturday from 10 am to 1 pm and from 3 pm to 6 pm. In the low season (October 16 to April 14), Monday to Friday, from 10 am to 1:30 pm and 2:30 pm to 5:30 pm. It is a place of worship for locals and you can book the church for events and marriages so sometimes you’ll find it busy and full of people. Officially, you aren’t allowed to take photos, but if you ask nicely and you’re alone they’ll let you snap a couple quickly! Please be respectful when visiting!

Contents show
The History of Igreja de São Lourenço
Who was Saint Lawrence?
The Azulejo Depiction of São Lourenço
Know before you go!