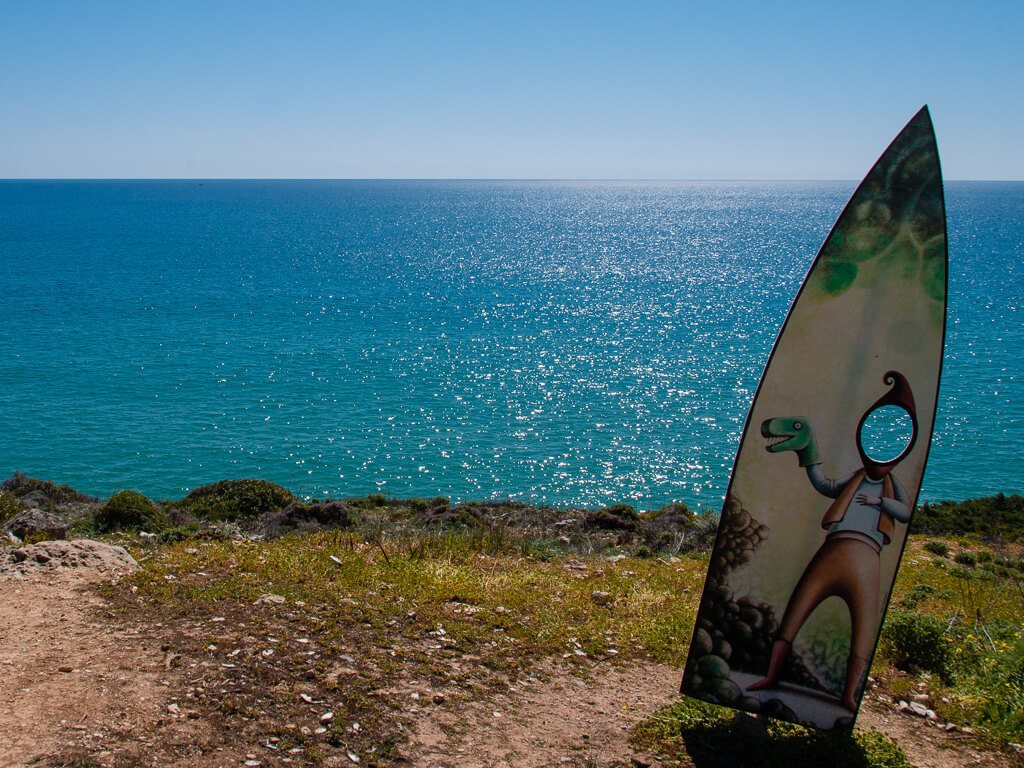 All over the Algarve coastline you’ll find the red and orange limestone cliffs the region is famous for. The lower part of these limestone cliffs are around 150 million years old and date to the Lower Cretaceous period. In amongst these layers of limestone, are the remains and fossils of prehistoric marine life, and even dinosaur footprints. On the exposed cliffs of Praia de Salema is where some of the most prominent dinosaur footprints are visible in the Algarve.

Praia de Salema is a well-known family beach resort in the west Algarve. If you walk towards the western end of the beach, you can find several large shelf-like platforms among the rocks and coves. Several of these platforms have different sets of dinosaur tracks running across them. These footprints were ‘discovered’ in 2001 by geologists from the University of Lisbon, but if you ask the locals, they’ll tell you they always knew they were there!

The dinosaur tracks are pretty easy to spot and form a line several meters long. From their size and shape, it’s believed the footprints belonged to a type of Ornithopod, a herbivorous biped. The name Ornithopod actually derives from the Greek to describe ‘bird-foot’. From the footprints themselves, you’ll be able to make out the shape of ‘bird-feet’ and the outline of a three toed dinosaur that doesn’t have claws. From the evidence, footprints and other signs of life, it’s reported that the shelf was originally the muddy-sand bottom of a lagoon. As a result, the footprints are were well preserved in the sediment. Chat to the locals in any of the nearby bars and cafés, they’ll tell you there are plenty more fossils to be found among the cliffs, shelves, and beaches of the coastline around Salema!

How to find the dinosaur footprints in Salema?

At low tide the dinosaur tracks are accessible from the beach, but you might have to scramble up a few rocks. Alternatively, a well-maintained set of stairs leads to the top of the shelf from the clifftop above. The clearest set of dinosaur tracks are on a shelf several steps to the west of the staircase. Parking is available at the clifftop, and the stairs are marked by a rather cute dinosaur surfboard. If you’re visiting at high tide the rocks can be slippery and there’s a chance bigger waves will splash you, so be careful!

If you’re feeling adventurous, then there is another set of dinosaur footprints hidden nearby. You can take the clifftop walk to Praia Santa to the west of Salema beach. If you parked in the clifftop carpark mentioned earlier, it’s a about 1km each way. The start of the hike can be found at Urbanização Ematur 20A, Budens. From there it’s a small hike west along a dusty trail through the low scrub. Which will lead you to the usually deserted beach of Praia Santa and the slightly more popular Praia da Figueira. On the western side of Praia Santa you’ll again be able to find cliffs, coves and several small shelves. On these shelves there’s at least four different sets of dinosaur tracks in different directions. Unfortunately, these are more degraded. However, researchers have been able to attribute the bigger footprints to Ornithipods, and the smaller to unknown bipedal dinosaurs.

We’d love to hear from you if you know of any more locations you can find dinosaur footprints in the Algarve!

If you’re interested in more of the Algarve’s prehistoric life then this paper provides an excellent overview. Unfortunately it is only in Portuguese.