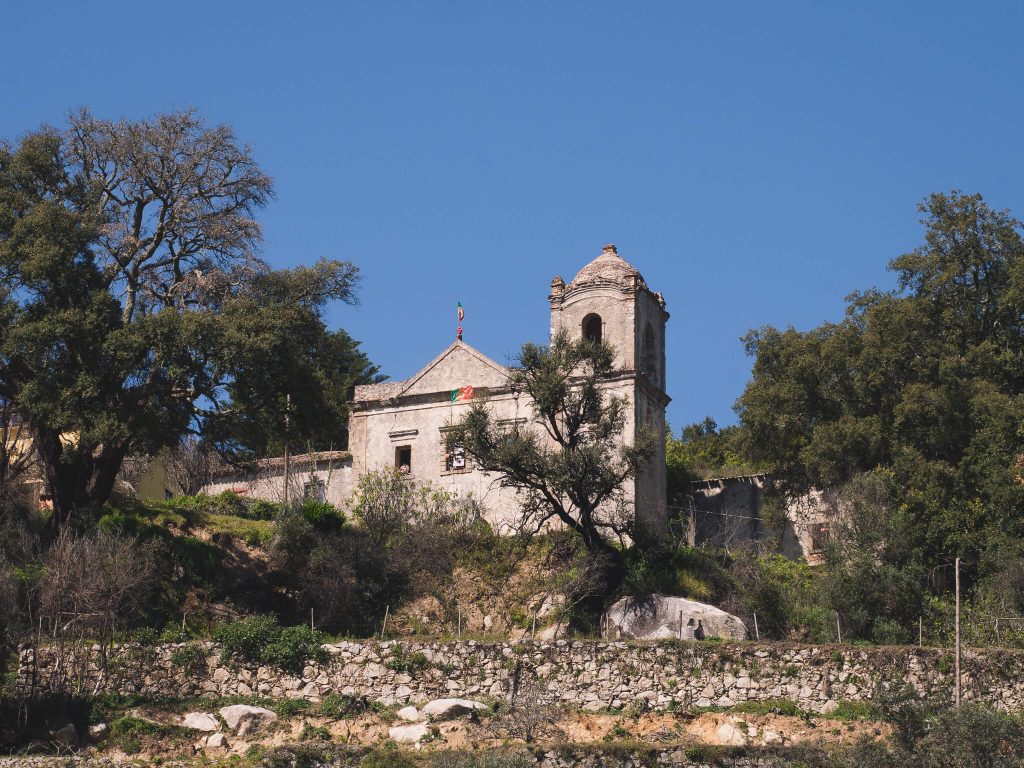 An eerie and abandoned convent lies in ruins on the hillside above Monchique. If you’re into unique buildings, history and places with a somewhat odd feeling to them, then visiting Monchique’s convent might be for you! It’s full name is Convento de Nossa Senhora do Desterro and it’s a short walk from the town of Monchique.

Our Visit to Convento de Nossa Senhora do Desterro

The stories of travelers are similar. As you approach the convent there are multiple red painted warning signs saying that this is private property. But a friendly person will appear and beckon you in. Not knowing what to expect we walked up, and just as the reviews had said a man did beckon us in. My alarm bells were ringing, should we really follow this smiley person into a long-abandoned convent? Well curiosity got the better of us and we followed him in through a side entrance. Once inside he left us alone to explore the remains of the convent. It’s made up of a large roofless cloister, an altar room and a small chapel. Rather eerily, the inside has been scrawled with graffiti and inside a handmade altar had been installed. The upstairs was blocked off through a crudely made gate.

Although friendly, the caretaker was eccentric and through our broken Portuguese we got to learn a little about the history of the place. He then left us in peace to explore and take some photos. As you’ll see from the photos, the inside is badly ruined and nature has really taken over. The cynic in me expected to be asked for payment before or after entry, but there was no such demand. In fact, the only thing they asked was if we’d like to buy some clementines or natural products from them. I guess their payment for being live in caretakers was from running a small ‘gift shop’ if you could call it that.

The History of Convento de Nossa Senhora do Desterro

After our visit, the research began. First, by asking a few of the locals what the story of the building and its current caretakers was. Legend has it that two sailors at sea during a storm made a promise that if they were to survive. They would build a church in the first settlement in Portuguese territory they came across. Supposedly they survived the storm and would found the convent in the hills above Monchique. Although a noble legend, the history books state that the Manueline style convent was actually founded by a Pêro da Silva in 1631. The same who would become Governor of Portuguese India.

Like many grand buildings in Portugal, Monchique’s convent would be ruined by the great earthquake of 1755, before being rebuilt. It was then permanently closed in 1834 and sold at public auction in 1842. Due to events not quite known, it was sold in fractions, reportedly to multiple different families all taking a share and using it as residence. However, due to its advanced degradation it would soon be abandoned. In the 1970s it was then occupied by several low-income families, and on agreement they started paying rent to one of the co-owners. Although by the 1980s, the municipality had started the process of purchasing the fragments of ownership from various families that they could trace.

Monchique’s Convent in the Modern Day

In the early 2000s the convent was still occupied by descendants of the same families. It was at this time that the Monchique municipality began drawing up plans to restore and protect the ruins of the convent. This process was delayed repeatedly due to the tricky ownership situation and would only be realised in 2007. It was decided that the municipality would purchase the parts whose owners were known. While the remaining portions would be paid for as and when the owners came forward or were discovered. The plans for the convent included a public place of worship as well as a grand 27 room hotel and swimming pool, similar to the famous Palacio de Estoi. Despite their intentions, these plans would come undone when natural disaster struck in the form of the 2018 Monchique wildfires.

It would be those very same families that occupied the convent that would come to save it. Despite it being reported that the convent had been lost to wildfires, the true story would come out later. The two brothers that occupied the building awoke during the night to find flames approaching. While one quickly filled a crop sprayer with water and began to hose down the trees and land around the convent. The other was using a shovel to smother as much of the fire as he could. From the village below it looked like the battle was lost and the convent was destroyed, which would be reported in the local news. Somehow the brothers were able to survive and save the convent. The brothers today still joke whether it was a miracle that they were able to save the convent, or if it was the convent that saved them!

Supposedly with their priorities elsewhere and the still complicated issue of ownership to resolve the local municipality have put their plans on hold. During this time, they’re allowing the brothers to remain in the convent grounds rent free.

Know before you go: Monchique’s Convent!

Google maps has the Convent marked and will gladly offer you directions to drive to it. I can’t stress enough how much of a bad idea this is. The streets are tight and very steep and, in some cases, impassable by car. The final kilometre is a steep gravel path and not suitable for vehicles either! We definitely recommended to park in the town and take the 15-minute walk instead.  From the town the small hike is well signposted with brown arrow signs pointing you up to the convent. As above, nearly every traveler is greeted by the people that live there – following our research we’re assuming either of the brothers. They’re friendly, but eccentric and even with language problems they’ll let you in.