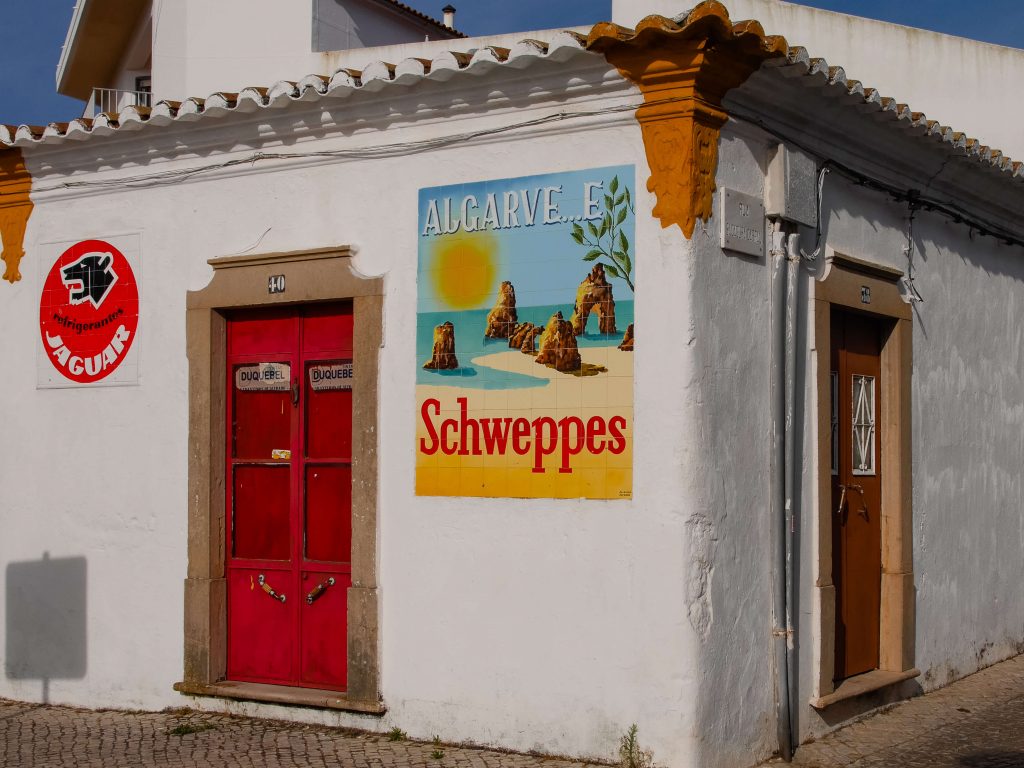 A few weeks ago we made an Instagram post of us finding an old tiled advertisement for Schweppes in São Brás de Alportel. After a short conversation with a local we discovered the sign and its simple phrase ‘Algarve E Schweppes’ had been there for sixty odd years. We were amazed and we wanted to know more. Much to our joy and a little to our dismay we found some surprising answers.

Contents show
Algarve e Schweppes
Jaguar Refrigerantes
Azulejo Publicitário Português
Can you tell us a little about yourselves and how you started the project?
Why are they being covered up, removed and even destroyed?
How can we, and everyone else contribute to the project?

The sign in question is a vintage advertisement for Schweppes. On the other side of the building there was another striking red and white advertisement for Jaguar Refrigerantes. The Schweppes adverts date to between 1956 and 1965 when Schweppes commissioned Fabrica Aleluia de Aveiro to produce advertising panels for them. To this day Fabrica Aleluia is still producing painted advertising panels. The advertisements are as bold as they are simple, and several variations of them exist across the Algarve. They all feature the slogan ‘Algarve e Schweppes’ or ‘Algarve and Schweppes’. Within the several versions found across the Algarve are the same slogan matched with typical Algarve elements like architecture, beaches and local plants.

Although the Schweppes in question is still a recognised name in soft drinks. The same cannot be said for the now defunct Jaguar Refrigerantes that appears on the opposite side of the building. This company only operated for a short period of time during the 1960s, before rebranding to JP Vinhos. More recently operating under the name Bacalhôa Vinhos de Portugal. Its original name lives on within these advertising tiles that can be discovered in many places in the Algarve. It’s again a simple but bold design, featuring a white square, a red circle and black jaguar. It can be found on many buildings and old cafes in the region.

Unfortunately, this is where our story takes a sad turn. These wonderful signs were at one stage much more common than they are now. Many examples in the region have been removed, covered up, or abandoned. Despite their historic nature and direct link to the past they are not protected at all. As recently as 2016 they were still being removed from historic town centres in the name of modernisation as this blog post in Portuguese discusses. The sign being discussed was removed in the same town as the one in our photo! During the renovation and painting of the walls of the café, the sign was taken down and reportedly lost.

Fortunately, the story doesn’t end here. There is a group of people working hard to catalogue, publicise and in some cases restore these iconic designs. They are Azulejo Publicitário Português and just this year they were involved in the restoration of another of these adverts. We got in touch with them to ask them a few questions about their endeavour and how people can help if they wish. The answers were received in Portuguese and have been edited for clarity.

Can you tell us a little about yourselves and how you started the project?

We’re three friends with a passion for travelling and photography. We all share a love of the interior of the country and on a recent trip we were struck by an advertising panel for Chile Nitrate. We’re all in our thirties and these panels especially those advertising Chile’s Nitrate, Firestone and Licor Beirão are firmly entrenched in our childhood memories from the places we grew up.

At this time, we tried to uncover some information or a catalogue of these panels and we found that one did not exist. The idea behind Azulejo Publicitário Português was then formed. With our shared interest in history, photography and with one us being a programmer we began the project. It’s aim to catalogue, photograph and form an online repository to document all of the known examples that still exist. Over time, through our research and suggestions sent from followers on social networks more and more have been found.

Why are they being covered up, removed and even destroyed?

The signs are particularly vulnerable because they were often placed on private buildings, they can easily be damaged or removed when the buildings are renovated or demolished. We think people don’t always consider their cultural value. Not just in the original artistic techniques and historical way of advertising, but also in the telling of the economic and everyday history of the factories and businesses that originally commissioned them. In many ways these signs offer a window into the historic industrial heart of Portugal. Despite this and their age, the signs also operate in a precarious legal space. Even if the original businesses that commissioned them are defunct, they’re still considered advertisements and require a license. For these reasons many examples have been painted over, covered up or taken down entirely.

How can we, and everyone else contribute to the project?

Faced with their gradual disappearance, we intend this project to contribute to the preservation and memory of these wonderful panels. We intend to inform the public through the publication and dissemination of both the original artworks and the methods to create them.

The best way to contribute is to go to our website and submit a new entry. Simply put a link to Google Maps and we’ll take care of the rest.

We want to extend our thanks to David at Azulejo Publicitário Português for taking the time to answer a few of our questions. If any of our readers has more to add to this story we’d love to hear from you! In the meantime, if you find these signs, add them to their website and don’t forget to tell the owners you appreciate seeing them.

Contents show
Algarve e Schweppes
Jaguar Refrigerantes
Azulejo Publicitário Português
Can you tell us a little about yourselves and how you started the project?
Why are they being covered up, removed and even destroyed?
How can we, and everyone else contribute to the project?