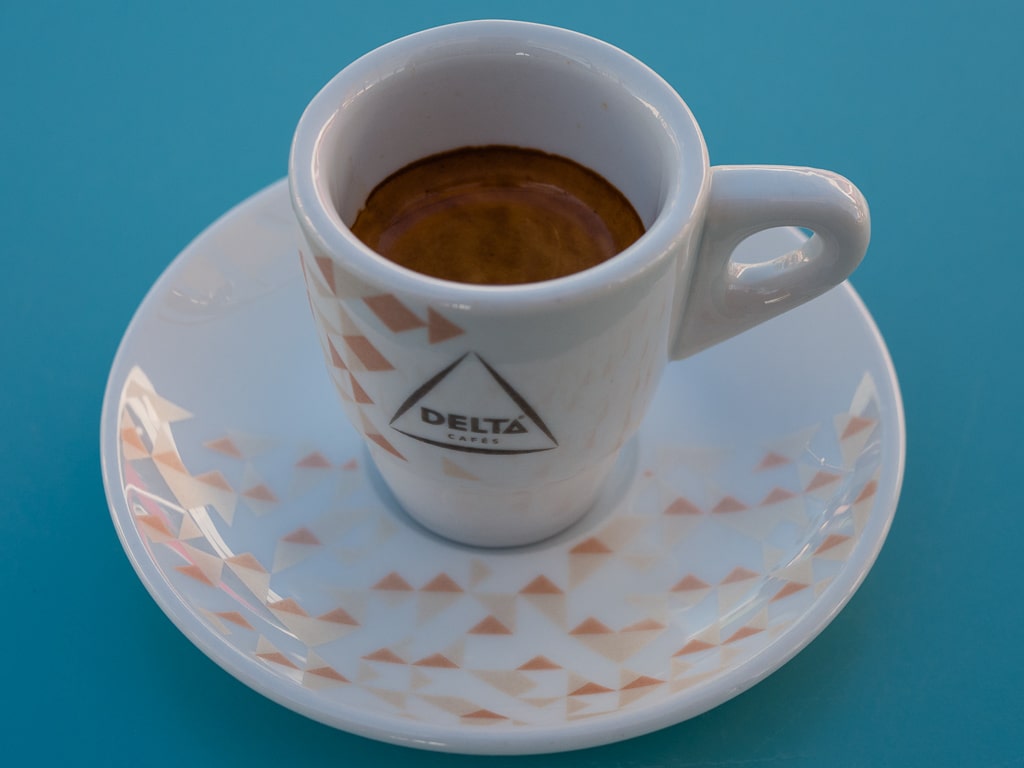 With at least one of us having lots of experience of working in a typical Portuguese café we thought we’d be in a great position to explain coffee in Portugal. Not just the types of coffee you can get, but more importantly how to order them when you’re in Portugal. Today, coffee is an essential part of Portuguese culture. What the cup of tea is to the English, coffee is to the Portuguese. It really is ingrained in everyday life here, it’s almost a part of what makes Portugal live and breathe. In many places you’ll find life doesn’t really start until everyone has had their all-important café or bica.

A Quick History of Coffee in Portugal

First let’s start with a quick history lesson on coffee, and the role the crafty Portuguese had to play. It’s reported that the Portuguese first got their hands-on coffee beans in 1727 through the work of one rather sneaky soldier. The value of coffee and coffee beans was well known, and when Francisco de Melo Palheta was stationed in Brazil he set about trying to locate some. It would be found in nearby French Guiana, but not wanting to trade the valuable beans to a regional rival, the governor of French Guiana refused to do business with the Portuguese. Undeterred, Palheta would go on a diplomatic mission. A diplomatic mission where he would seduce the Governor’s wife, and escape with a bouquet of flowers hiding coffee beans. Coffee was then introduced to Brazil, and coffee production reached a scale never seen before.

The colonists developed extensive plantations across the country and then sent the beans to Portugal for roasting and distribution. Cafes started opening in cities like Lisbon and Porto, attracting artists and politicians who would debate the issues of the day while drinking short, sharp coffees. The habit spread across the country and today the Portuguese population consumes vast quantities of coffee every day, on average each person consumes 4kg of roasted coffee per year! Obviously, the humorous tale is disputed in many ways. As is the origin of coffee in Portugal. What can’t be disputed is the existence of some incredibly beautiful cafés with their origins to this time period. For both history buffs and coffee connoisseurs, no visit to Portugal would be complete without visiting Martinho da Arcada in Lisbon, or Café A Brasileira and Café Majestic in Porto. Even the Algarve has its share of historic cafés with Allianca in Faro and Café Calcinha in Loulé. All tied to the golden era of coffee production.

Where to Find Coffee in Portugal?

If you don’t have the luxury of visiting the historic cafés, and let’s face it, they’re also the most touristy and often expensive. Where else can you find coffee in Portugal? Well, the pastelaria is where it is typically served. A pastelaria is a hectic mix of a bakery, café and a bar. In most towns and villages, its where most people start their day, and every town will have at least one. They are a little different than coffee shops in the UK in that it’s fairly normal to serve meals as well as snacks, it’s a common place to grab your breakfast too! Usually though, you won’t find a menu, or if you do it will be long after you’ve been asked for what you’d like. So, lets go over the typical types of coffee you’ll find ordered.

The Types of Coffees Available in Portugal

From experience, you can be as specific as you like when ordering. Several requests seem strange for us but are very normal here in Portugal. Everything from asking the exact percentage of the cup filled, to specifying a cold or very hot cup. Typically, the cups are stored on top of the coffee machines, and many of them have a hot plate to keep the cups warm. It’s not unusual for people to ask for a hot cup, or a cold one. We’ll start with the most basic types of black coffee you can order, and how to order them.

The café is perhaps the simplest and most common coffee you’ll find everywhere. It’s essentially the Portuguese espresso, and will be short, sharp and piping hot. Confusingly, it goes by different names in different parts of Portugal. In the North and especially Porto it’s commonly called a Cimbalino. In Lisbon and its surrounds, it will be called a Bica. There’s no hard and fast rule, and the locals understand the meaning of all three, and usually use all three words as well.

The above point about being specific when ordering starts to apply here. A café cheio or bica cheia is a small espresso topped up with a little water. Typically, the espresso cup used for a café will be served about half full, with a café cheio the cup will be topped up with hot water. Slightly lengthening the coffee.

Quite simply a double café, a double espresso. The espresso cup will be served full, with two shots of espresso.

Um Carioca divides opinion and there are multiple ways of making one, which entirely depends on the person making it. It’s best to be specific, as one variant is much worse in our view. A carioca is typically a weak or mild espresso, a lighter café. Sometimes ordered after a meal, or late at night, for someone that wants a coffee hit, without a strong caffeine kick. Typically, and the way I was taught is to use half a measure of ground coffee, but in some cafés they’ll simply reuse a previous measure of ground coffee instead of fresh. This tastes much worse, but the effects of a weaker coffee are much the same. An alternative method is to start a normal measure of coffee, but to wait slightly before placing the coffee cup under the stream, again resulting in a weaker coffee.

Um Abatanado is a longer black coffee that will be served in a larger cup. It’s the same amount of ground coffee as a café but poured for longer. It’s the closest coffee you’ll get to an americano or black filtered coffee. If you want a coffee to enjoy for slightly longer, perhaps to sit, sip and enjoy for longer then this should be your coffee of choice.

Now for the coffees that are served with milk. The first thing to mention, is that most cafés usually always use UHT milk. That’s ultra-high-temperature treated milk, also known as long-life milk. It makes up 90% of the milk that is sold in Portugal, so it’s very common. However, for those countries where fresh milk is more common, it means the milk and the milky coffees can have a notably different taste to what you’re used to.

Um Pingado is simply a café, served with a small splash of milk.

Um Garoto, is a slightly larger Pingado. A garoto has an equal amount of milk and coffee, and served in the typical espresso cup.

Meia de Leite literally means half milk. It will be served in a larger cup (the same size as an abatanado) and is around 50/50 coffee and milk.

Um Galão is about the closest coffee you’ll find to a latte in Portugal. It’s approximately ¼ coffee, and ¾ steamed milk. It’s typically served in a tall glass mug, and sometimes will still be separated when it’s served (you’ll be given a tall spoon to stir). However, as mentioned above, the biggest difference to a latte you’ll find is the UHT milk.

This is the typical and only acceptable form of iced coffee in Portugal. If you’re looking for anything more, you will most likely have to head to your nearest Starbucks or even McDonalds if you’re in a city. Portugal, and its pastelarias don’t really do any form of iced coffee other than a Café com Gelo. That’s simply a café with ice. It will be served in two separate cups, your usual café, and a separate cup for several cubes of ice. Leaving it up to you to pour the café into the ice to chill it.

Café com Cheirinho literally translates to coffee with a scent. It’s a Portuguese take on an alcoholic coffee made from a café and usually a brandy or Aguardente. Similarly, all over Portugal it goes by several different names. It’s a Bica com Cheirinho in the north, and a rather pleasant Café com Música in Madeira and the Azores.

Licor Beirão is a traditional herbal liquor from central Portugal and is a pretty popular if not acquired local taste. Café com Beirão is simply Café com Cheirinho, but specifically with Licor Beirão. It’s not overly popular, but you will see it on plenty of menus, and even marketing material for Licor Beirão.

While researching for this article, one coffee that was included on most lists of Portuguese coffee was a Café Mazagran. However, it’s not something I’ve ever served, nor has anyone ever asked for one in any of the coffee shops I’ve worked in the Algarve. Perhaps one of our readers, can point us to somewhere that will serve a good one! What is it? Well it is a coffee drink of Algerian origin, which recipe seems to differ depending on the source describing it! At its base it’s a café topped with water, ice, and slices of lemon, lime, or the juices of either. In several recipes, alcohol like rum, or cachaca is also used. It’s not something we’ve tried yet, but we’ll update here when we do!

How to Order Coffee in Portugal?

This guide assumes, like the rest of Portugal, you’re starting your morning with a coffee. It’s always a good idea and polite to greet the person serving your coffee with a bom dia (That’s good day in English and is used from morning, to the afternoon). Next is your coffee order, Um Café, por favor (one café please). Substitute Café with whichever coffee you feel like. So: bom dia, um Pingado por favor to give another example!

Can I order an Americano in Portugal?

Yes, you can. It’s often a dice roll as what you’ll be offered. Some people may interpret it as an abatanado (espresso topped with water). Others may think you’re as uncultured as they get and are asking specifically for instant dissolvable coffee (Nescafe), which isn’t that unusual!

Cappuccino – Can you order a Cappuccino in Portugal?

What brands of Coffee are in Portugal?

Similarly, to the Superbock vs. Sagres question, most café’s you find will be branded with one of the major coffee brands. The market is dominated by the Portuguese company Delta who hold approximately 50% of the coffee market. Other popular brands include Buondi, Nicola, Sical (Nestlé) and Chave de Ouro. Each cafe or pastelaria will usually be branded with one of these companies’ logos, the cups, chairs, tables and often sunshades.

What coffee will you order in Portugal?

Well, there you go! That is about everything you need to know before you enter any Portuguese pastelaria or coffee shop. In our advice, simply start with a café and work from there. You’ll soon find out if its too strong or weak for you! What’s your favourite coffee in Portugal? Let us know in the comments!

5 thoughts on “Portuguese Coffee: How to Order Coffee in Portugal like a Local”